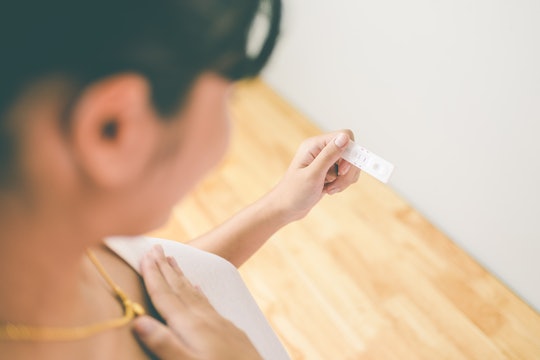 Can You Get Pregnant With Just A Little Sperm?

Here’s what doctors want you to know about sperm count and fertility.

OK, so technically it only takes one sperm and one egg to make a baby. When you factor in real life, however, conception is rarely that straightforward and easy. For instance, can you get pregnant with just a little sperm? Really, what are the over/under odds on conceiving a baby with the tiniest bit of semen? It seems like a simple question, but there are many factors involved.

First, it helps to keep in mind that swimmers are generally plentiful and that there are millions of sperm in the average male ejaculate. Even what looks like a tiny bit of fluid can contain millions. If that sounds like overkill, remember that the sperm has to venture through the fallopian tubes to get to the egg.

So how much semen is needed to produce a pregnancy? Quite a bit.

What is low sperm count?

“Sperm counts vary from day to day and person to person, but typically a normal sperm count is considered 15 -100 Million per millimeter of semen,” Dr. Lora Shahine, MD, FACOG at Pacific Northwest Fertility, tells Romper. “Anything less than 15 million sperm per ml is considered a low sperm count, also known as oligozoospermia,” Dr. Jane Frederick MD., FACOG Medical Director, HRC Fertility, tells Romper. “Of the sperm released in a typical ejaculation, at least 75% should be alive and viable, and at least 50% should be motile at least one hour after ejaculation for the best odds of conception.” Getting a semen analysis is one way to learn more about a person’s sperm count and overall health.

Can someone with low sperm cause a pregnancy?

Technically, yes. “Male fertility as determined by a semen analysis is a continuum and there is no absolute parameter which can preclude initiating a pregnancy,” Dr. Natan Bar-Chama, a urologist at RMA of NY tells Romper. “As long as there are some motile sperm the possibility exists yet the chance of success diminishes as the individual parameters decline.” Sperm has to make a pretty long and difficult journey to reach the uterus, after all.

Here’s how another physician explains the relationship between sperm count and the chances of pregnancy. “A low count does not necessarily mean someone is infertile and sperm count is one of many factors that impact fertility,” says Dr. Shahine. “There is no one black and white number below which natural conception is impossible, but I counsel my patients that if counts are consistently lower than 2-5 million sperm per millimeter of semen then the chances of natural conception are extremely low.” In these instances, work with your doctor to learn more about increasing your chances at conception.

What can lower sperm count?

Both genetic and external factors can affect sperm production. “Some issues that can lower sperm count include: a varicocele (dilated, swollen veins in the testicle that increase scrotal temperatures), infection, ejaculation issues, some medications, some chronic medical conditions like diabetes, some hormonal imbalances, heat exposure like saunas and hot tubs, recreational drugs like marijuana, tobacco, and cocaine, chronic stress, and anabolic steroids (like testosterone),” says Dr. Shahine. Again, a personal doctor's appointment is the best way to address this health concern.

How can you increase sperm count?

Lastly, an individual’s sperm count can often be increased. “A natural way to increase sperm count is focusing on a healthy lifestyle,” says Dr. Bar-Chama, who explains that quitting smoking, eating nutritional foods, and avoiding excessive heat such as saunas or hot tubs can help.

Although it’s possible to get pregnant with only a little sperm, working with a doctor to reach an optimal sperm count can be a positive decision for your fertility.

Dr. Natan Bar-Chama, a urologist at RMA of NY and doctor in Progyny’s network

This article was originally published on July 28, 2016