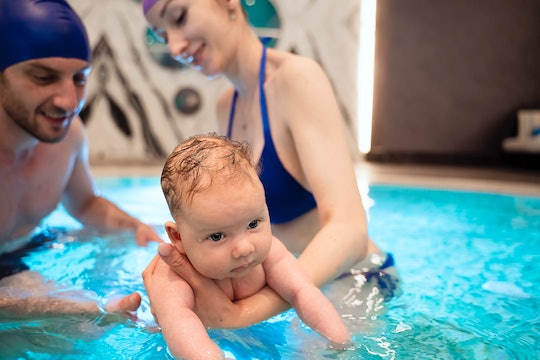 Your Guide To Swimming Postpartum

And enjoying this summer tradition with your family.

Giving birth is a life and body-changing process, and sometimes, the only thing you want is to return to your pre-delivery activities. But, with a slew of recovery symptoms, and trying to acquaint yourself with this new post-baby bod, it's not always an easy transition back to normalcy. Will the pain ever subside? (Yes.) Will you ever feel rested again? (Doubtful.) And, most importantly, with summer looming on the horizon, will you be able to join your family in all the fun activities planned?

Sure you can, including swimming. But let's not joke around — recovering from birth is no easy feat and it should not be taken lightly. As Mayo Clinic noted, post-delivery symptoms can include sore breasts, constipation, vaginal bleeding, "after pains," and hot or cold flashes. Emotional post-delivery symptoms are no picnic either and could include "baby blues" or postpartum depression. Add this to the actual daunting task of caring for a newborn on very little sleep, and you may wonder how you're still standing.

Dr. Mary Kate Lintel, OB-GYN resident at Cleveland Clinic, has a reminder for moms chomping at the bit to get back to their pre-baby exercise routines. “Remember how hard your body has worked recently! Recovery from delivery takes a few weeks, so just make sure if you are swimming, especially athletically, to be kind to yourself and recognize that you will probably fatigue faster, so start slow,” Lintel tells Romper in an interview. It took your body many months to prepare for birth, and it will take some time to recover from that process. If your baby was born via C-section, it could take even longer to recover from than if your baby was delivered vaginally.

Risks Of Swimming After Delivery

While you're eager to get back to the pool, you may have to wait a bit. According to Karen Pelone, Nurse Manager of Labor & Delivery at Providence Tarzana Medical Center, most obstetricians recommend six to eight weeks postpartum to recover before resuming swimming. Before this time period, Pelone mentions in an interview with Romper, there is a risk of infection for women recovering from either form of delivery.

Like many pieces of medical advice, however, the specifics often vary from doctor to doctor. Lintel points out that there isn’t a hard and fast rule when it comes to resuming your water activities, and evidence about risks is lacking. “My institution recommends avoiding swimming, baths, and anything in the vagina for four to six weeks following delivery to avoid introducing bacteria and increasing risk of infection, although this risk has never been proven,” says Lintel.

It’s important to pay attention to your body and watch out for any potential red flags as you resume physical activity after welcoming your bundle of joy. Things like extreme fatigue, increased bleeding, and intense pain can all indicate a potential issue. If worrisome symptoms occur, a newly postpartum mama should press pause on the exercise and consult their doctor.

Recovering From A C-Section Versus A Vaginal Delivery

It’s no secret that recovering from a cesarean delivery and a vaginal delivery involve different healing processes, and no two recoveries are identical. Luckily, Lintel says mothers recovering from surgery can typically resume swimming on the same timeline as mothers who delivered vaginally.

“Our restrictions are not extended for women with C-sections,” Lintel explains. “The incision from a C-section should be scarred at seven to 10 days, although still not totally healed, theoretically protecting it from an infection.”

While women should speak with their doctors when navigating their return to postpartum exercise and swimming, a general rule of thumb is to wait until the lochia, or the bleeding and brown discharge after delivery, has subsided. Lochia, or “how your body gets rid of the extra blood and tissue in your uterus that helped your baby grow” per WebMD, can last anywhere from two to six weeks after delivery. When this lochia ceases, Lintel says this is a good indication that the endometrium, or lining of the uterus, has healed, and your uterus has returned to its original state.

The Benefits Of Postpartum Swimming

Brian A. Levine, MD, of CCRM New York, also suggests waiting until lochia (post-delivery vaginal bleeding) has stopped before getting back to the pool. But, after your lochia has subsided, Levine encourages women to swim post-delivery. In an interview with Romper, he says that swimming is a terrific, low-impact, aerobic activity. The buoyancy of the water means there’s less impact on your recovering pelvic floor, as well as your ligaments (which are still loose from the relaxin hormone for months after childbirth).

The benefits of postpartum swimming go beyond physical, however. In a 2019 article published in Evidence-Based Practice, medical researchers at the University of Washington found that postpartum exercise programs result in a statistically significant decrease in depressive symptoms. Additionally, “Women were 54% more likely to experience remission of depression after the exercise intervention,” the researchers stated.

Interestingly enough, swimming offers PPD-related benefits even if the swimming occurred before baby even arrived. In a 2018 study published in the Journal of the American Psychiatric Nurses Association, researchers from the University of Granada found that women who participated in moderate physical exercise in an aquatic environment three times a week are at a lower risk of developing postpartum depression after delivery.

The American College of Obstetricians and Gynecologists (ACOG) recommends that after having a baby, and when cleared by their doctor, a woman should get at least 150 minutes of moderate-intensity aerobic activity every week. And while it may be hard to spare any of baby’s precious nap time exercising, doing so can actually help boost your energy and improve sleep quality, according to ACOG.

After you have your baby, check with your doctor about getting back to the pool — you may be able to swim sooner than you think. (And indulge in a pool-side margarita.)

More Like This
How To Properly Clean An Inflatable Pool
Can Swimming Induce Labor? Experts Weigh In
30 Easy Summer Activities For Kids That Work Rain Or Shine
15 Fun & Historical 4th Of July Facts To Share With Your Kids

This article was originally published on May 27, 2017