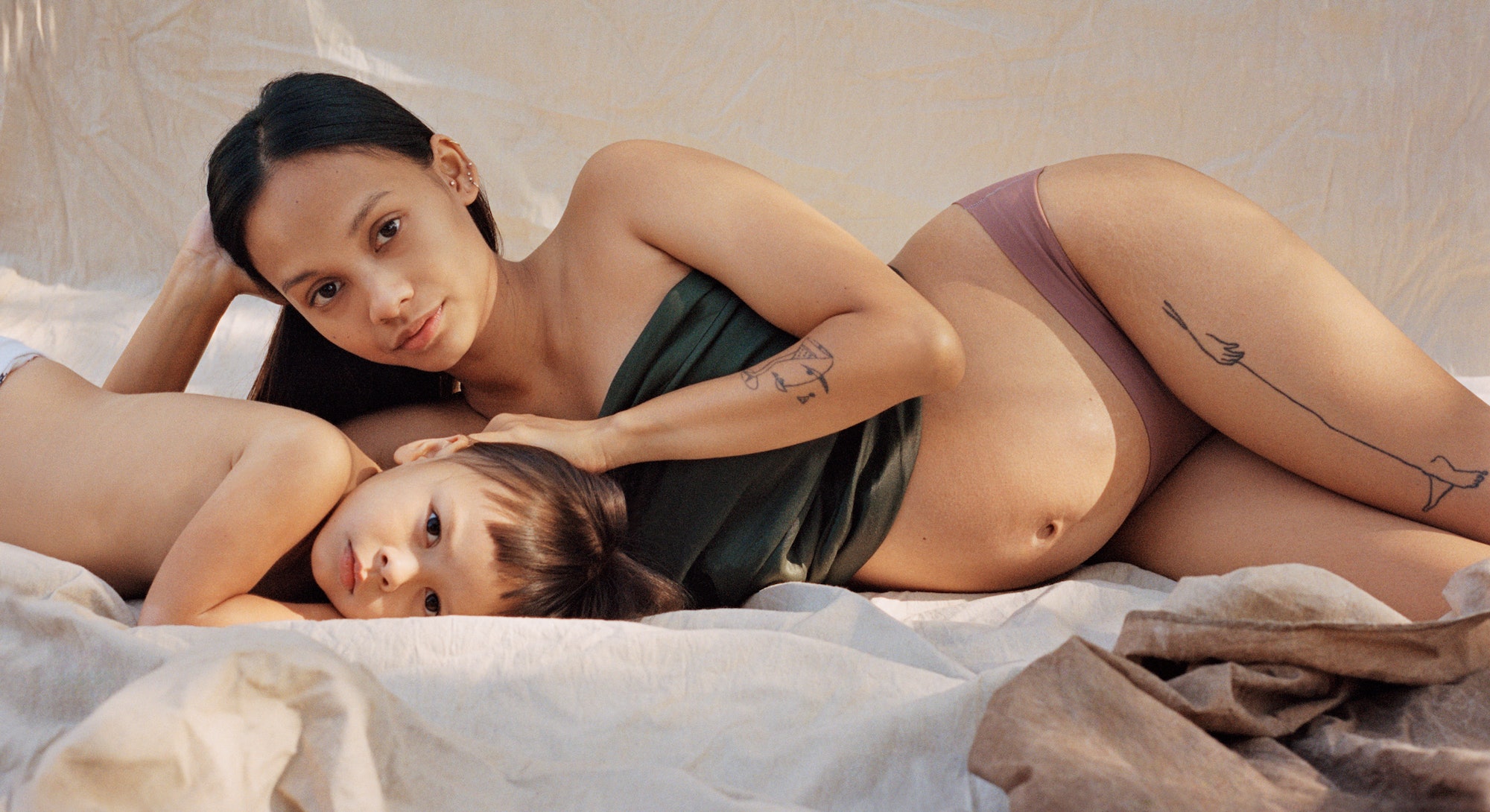 The Small Sadness Of Nobody Seeing You Pregnant

“I had reached this apex of what culture tells me I’m supposed to do, and there’s no one there to see it.”

Elisabeth Donnelly found out she was pregnant on March 11, 2020. Her daughter Porter was born in late October, just before New York City entered its second wave of the COVID-19 pandemic. This timeframe, in addition to her partner’s Type 1 diabetes, meant that she spent the vast majority of her pregnancy indoors. She missed out on seeing friends and family, but also avoided the routine social interactions with strangers that — for better and worse — are a part of most pregnant people’s lives.

“There was no point at which I could have a belly and expect a seat on the subway — if that even happens,” she says. “I don’t even know, now.”

It might seem almost preferable, in some ways, to avoid being pregnant in public — to skip all of the “your first??” and “it’s a boy, I know it!”-type comments from the peanut gallery, and only let people see you from a flattering angle on Instagram. But to experience a life-changing event in a vacuum creates, says Donnelly, a weird sense of absence. “We went to the bakery, and the reaction of the people who work there … I realized, Gosh, you are the only folks who’ve seen my pregnancy and now see this kid.”

The first wave of the COVID pandemic had devastating consequences for pregnant and postpartum people, many of whom labored in masks, were separated from their newborns or forced to choose between a doula or a partner in the delivery room. But as we enter the second year of the pandemic, researchers and medical health professionals are beginning to have some data on the effects of a wider variety of COVID-related stressors on new parents. It also seems more possible, now, to speak openly about how bleak pregnancy and new motherhood can be during this time — in ways that are distinct, though not totally different, from how bleak they can be at the best of times.

Reproductive psychologist Julie Bindeman, Psy.D., has been extending her working hours since March to meet the growing need for mental health care. While some of the patients she treats are in crisis, she also sees a fair number of patients who describe the subtler, more mundane losses they’ve experienced this year — like the sadness Donnelly describes of having a mostly unnoticed pregnancy.

“It’s the grief of plans; it’s the grief of how one imagined parts of life,” she explains. When you’re visibly pregnant, Bindeman says, “it’s something that we as a society fetishize a little bit, so it makes sense to me that people are like, ‘But I had reached this apex of what culture tells me I’m supposed to do, and there’s no one there to see it!’”

Amy Harrity, who took the photographs that accompany this article while pregnant herself, says that her goal was to document this complex mix of feelings. “This project was born out of that grief and that sadness,” she explains. “This and meeting these other women kind of brought me to the other side of it, too, and I found a lot of hope in that. I would say my first and second trimester, I was feeling those things really, really hard.”

Beyond grieving for missed experiences, Bindeman says that most of what she is helping her patients work through is how to acknowledge and honor how their pregnancies and births have been affected by the pandemic. “What’s really hard is to be able to name how things are not the same, and to be able to hold space for that,” she says. “It is OK that this is not what you planned, and it is OK that you have sadness around that.”

That might sound simple, but for many people, it’s hard to acknowledge that they are experiencing the profound joy of having a new baby and the sadness of everyday life in the pandemic simultaneously. Everyone I spoke to for this article emphasized that they were lucky — lucky to have had access to health care, lucky to have been able to keep their job, lucky above all to have had a healthy pregnancy and a healthy baby. Everyone also mentioned the silver linings about being pregnant during the pandemic: skipping or altering commutes and getting to spend more time with their newborns than their jobs would normally permit.

Mariam Garner, who works in physical retail, was furloughed from her job on the same day she’d planned to tell her boss she was pregnant. “Obviously COVID is horrible, but I got to have a really laid-back pregnancy,” she says. “I hate to be like, ‘This is a blessing,’ but in that one way, it was.”

Even for people who’ve otherwise felt like they had little to complain about, though, there is a sense that something intangible is missing. Because of the impossibility of gathering in person, things like baby showers, gender reveals, brises, and baptisms are either gone, virtual, or so small as to seem almost not worth the trouble. And while the decision not to gather is straightforward, it’s not clear what to do instead.

“Ritual can be so comforting to people,” says Bindeman. “Even if you’re not religious, there’s just this sense of ‘this is what we do.’”

Asenath Nakayama, who is due in July, says that she is currently having a hard time trying to plan if, when, and how she will do something that feels like a baby shower. “We don’t want to be the reason that anybody gets sick or exposes themselves,” she says.

Because of the impossibility of gathering in person, things like baby showers, gender reveals, brises, and baptisms are either gone, virtual, or so small as to seem almost not worth the trouble.

Being apart from family can also be painful in a very straightforward way. For Tara Grove-Scott, whose second child was born early last summer, one of the most anxiety-provoking aspects of being pregnant during the pandemic was abandoning her “vision of being able to heal slowly after the birth, and have this blissful postpartum period” with visits from family. Instead, she spent her leave caring for her older child and her newborn while her partner worked from home. The planned visits were canceled, since her family members lived too far away and didn’t want to incur the risks of traveling. “It raised my levels of stress and anxiety in ways I was really hoping to avoid,” she says.

Kate Axelrod, whose parents live an hour away from her, meets up with them every other week so they can have quick, outdoor, masked visits with their infant grandson. They’ve never held him or been closer to him than 6 feet apart. Axelrod’s father, who is immunocompromised, mostly stays in the car. “They were just so excited and they wanted to be the kind of grandparents who could be really involved,” she says. Instead, after the birth, she and her husband were almost completely on their own. “I hear about other people’s experiences and I think, ‘Oh yeah, we really didn’t have that.’ We did fine — we are fine. But it is sad.”

Harrity, the photographer, hasn’t yet been able to introduce her mother to her infant son. “I want the experience of my mom watching me become a mom,” she says. “You can FaceTime all you want, but she's not standing over my shoulder while I change his diaper, to give me a tip or teach me something.”

Now that older people and essential workers in some states are being vaccinated, the situation is not as bleak for currently pregnant people. Both of Nakayama’s baby’s grandmothers have already been vaccinated; they plan to come and stay with the family after the baby is born. Axelrod is beginning to go back to work, and her baby is being cared for part-time by a nanny, who wears a mask. Now, she wonders how her son will bond with a stranger whose face he never sees. “It must be weird, because babies respond so much to facial expressions,” she says. “How do they connect? I guess with her eyes.”

Donnelly has also noticed that her baby responds differently to her when she’s wearing a mask: “She’ll be slightly confused, and sometimes feel like I need to take it down so she’s feeling more comfortable. But she’s dealing with it. She’s resilient!”