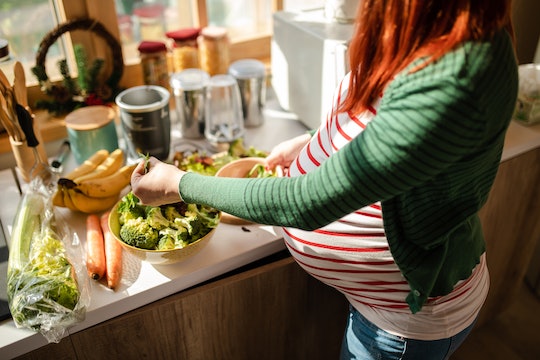 Everything You Need To Know About Gestational Diabetes

Keep calm and take notes. It may sound scary, but the condition is manageable.

In a perfect world, pregnancy would be a blissful experience, free of aches, pains, endless worries, and what-ifs. But let’s be real: If you’re expecting a baby, many what-if scenarios seem to set down roots and stress your mind 24/7. One worry that’s probably come up is whether or not you could develop gestational diabetes. You’ve probably asked yourself all the questions: How likely am I to get it? Should I go on a special diet to prevent it? If I have that cupcake after dinner, will I get it? (And you’ve probably heard a lot about that sugary drink meant to test your glucose levels.)

Before delivering the details on the condition (which aren’t all bleak!), a few basic facts: The Centers for Disease Control and Prevention (CDC) explains there are three main varieties of diabetes, and gestational diabetes is the kind that can come on during pregnancy. Its materialization is caused by the body not being able manage the amount of sugar in the blood, as explained by the American College of Obstetricians and Gynecologists. The CDC has also reported that it occurs in about 6% to 9% of expecting Americans. Is that cause for sleepless panic? Not quite. But it is a concern, and step one in managing the stress is getting educated.

So let’s start at the beginning, and examine all the thoughts that might run through your mind when pregnant and approaching that glucose test.

If You’ve Never Had Diabetes, Can You Get Gestational Diabetes?

The short response: Yes, you can. It doesn’t matter if you’ve never had diabetes or a diabetic issue. Anyone can be on the receiving end of this news. “It’s not your fault,” says Dr. Brian M. Mercer, M.D., an obstetrician-gynecologist and maternal-fetal medicine specialist in Cleveland, Ohio, who chairs Obstetrics and Gynecology at MetroHealth Medical Center, and is director of The Women’s Center. However, there are some people who may be at higher risk for the condition, says Dr. Dana Gossett, M.D., chair of the Department of Obstetrics and Gynecology, NYU Langone Health. “That’s either due to a family history of diabetes or to weight.” People who are overweight can have a high risk of gestational diabetes, Gossett tells Romper. Another factor could be if you have high blood pressure, as explained the March of Dimes.

How Will I Know If I Develop Gestational Diabetes?

Your OB-GYN should be on top of the scheduling, and you’ll likely receive your first test anywhere from 24 to 28 weeks into your pregnancy, as per the National Center for Biotechnology Information (NCBI). This is especially key, as you may not have symptoms, shared Stanford Children’s Health, though heightened blood sugar may prompt issues like unusual thirst or excessive urination (hard to measure during pregnancy when you pee a thousand times a day), as per NCBI. Typically the first test you receive (potentially barring, for example, any earlier warning signs or discussion surrounding preexisting conditions) is a glucose challenge test, potentially followed by a glucose tolerance test. Both involve drinking a sugary liquid and screening your blood afterward to see how the sugars are processed.

I Have Gestational Diabetes. Should I Be Freaked Out?

First, what does a diagnosis of gestational diabetes mean exactly? “In pregnancy, the placenta and the body create hormones that help maintain the pregnancy and help it to grow,” Mercer tells Romper. “And those hormones work against mom’s insulin. There are some moms who have trouble keeping up with the extra [amount of] insulin that their body needs to make because of the pregnancy. And so because of that, their sugars get higher than when they’re not pregnant. That’s gestational diabetes.” So if you have too much sugar in the body, that can cause some problems. “Insulin’s job is to help sugars, that have gone into your circulation through your diet and your intestines, get into the body’s cells so that the body can use those sugars for metabolism,” Mercer says. “And if insulin isn’t able to keep up, then the sugar outside the cell is higher. So the baby sees higher sugars, too.”

It’s important to understand the condition is one that can be handled with certain actions during your pregnancy. With the help of your doctors, and potentially a nutritionist, you’ll be able to navigate it. But there are risks involved with the diagnosis. The condition might impact the risk of preeclampsia, according to the U.S. National Library of Medicine. Also, your baby may become larger, and you might require a C-section, stated the CDC. Mercer explains that baby is making a lot of insulin in an effort to decrease sugars. “During pregnancy, high insulin causes baby to grow too quickly, it causes baby to store fat,” Mercer says. “After birth, baby’s making all this insulin and mom’s sugar goes away, so baby’s sugar goes way low. And that’s dangerous for baby after birth.” The baby would be monitored after delivery to manage the situation. In the long term, the child may be more “at risk” of diabetes later in life, shared the American Diabetes Association.

Do I Have To Go On A Special Diet?

Perhaps. “The whole basis of treatment is trying to get mom’s sugars to a normal range so that baby sees normal sugars — and so baby doesn’t make too much insulin,” Mercer says. “And that prevents baby from being too big, and it prevents their sugars from going low after delivery.” So during pregnancy, one of the goals is to eat less simple sugars, like “juices, pop, some fruits,” Mercer says. Instead, “you want to move to foods that are low glycemic, and harder for your body to break down — it takes more time — so your sugars don’t go as high and the nutrition lasts longer.” Since there’s no one ideal meal plan for every individual, Mercer shares, meeting with a nutritionist can help develop a strategy.

“We encourage three regular well-spaced meals four to six hours apart, with a small snack between meals and in the evening,” Mercer says. “A balanced diet that includes carbohydrates, protein, and fats is preferred. Examples of foods with more complex carbohydrates that don’t raise the mother’s blood glucose as much include whole wheat breads and pasta, brown rice, and starchy vegetables such as corn.” A good idea for someone with this condition, Mercer shares, would be to monitor blood glucose levels before and after meals to see how the body responds to the foods, and make adjustments as needed.

An active lifestyle (not weight loss, notes Mercer) is also recommended, as is checking and tracking blood sugar levels. “Exercise can really help regulate sugar in the bloodstream,” Gossett says. “A lot of women find it’s easier to maintain healthy sugar levels if after they have a meal or a snack, they go and take a 15-minute walk, which helps their muscles take up the sugar and helps prevent highs from happening.”

Some cases might require a medication or prescription (which could be insulin) to better manage your levels, explained the American Academy of Family Physicians (AAFP).

Will I Still Have Diabetes After I Have My Baby?

Gestational diabetes is a variety of diabetes that typically ends once the baby is born. However, Mercer says, a parent with gestational diabetes can remain at a higher risk for type 2 diabetes later in life, “because your tendency towards this showed up during pregnancy.” So stay connected to your healthcare providers after delivery; people who’ve had this condition need to be tested the rest of their lives, Mercer says. “Every three years is the current guideline.”

And remember, gestational diabetes is manageable with a bit of effort. There’s no cause for panic — just extra attention.