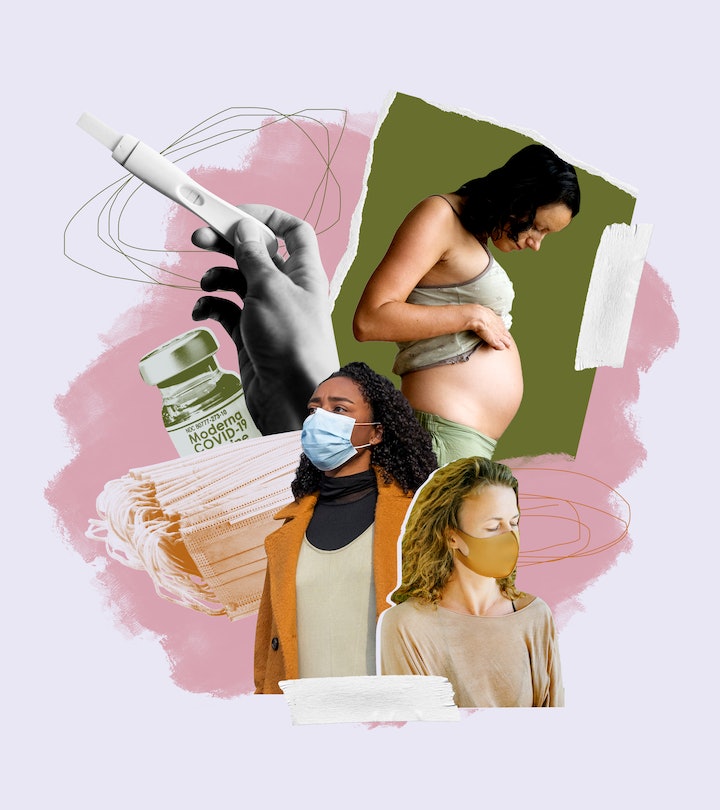 The Existential Crisis Of Pregnancy Now

How do we reconcile bringing new life into a world that's on high-alert to prevent death?

“Last year feels so hazy,” says Ewa Miller over the phone from her home in the Pacific Northwest. “It’s been this weird conflict of ‘I want to be a mom now, now, now’ and then the rational part of me saying, ‘Right, but you just need to wait a minute.’”

This time last year, Miller had a plan. When her elderly father had a stroke in 2019, she bargained with herself that if he survived, she would have a baby with her husband. In April 2020, she was due to begin fertility treatments after spending a year trying to get pregnant naturally with no progress. “I was hopeful and nervous to start treatment,” says the 30-year-old. “I’ve always felt like I’m meant to be a mom.” Then the pandemic hit.

In March, she got a call from her gynecologist saying that the clinic had to close. But when it reopened, months into a global pandemic, Miller and her husband were thinking differently. “How can a person decide to bring a child into a world where, even if the child doesn’t get sick, they can carry the virus and end up killing their grandfather?” she says. “I feel like I’ve had to decide between picking my parents and time with them now or choosing my kid and maybe getting them time with their grandparents.”

Miller and her husband decided to delay. “We stopped looking at the future and began focusing a bit more on ‘What are we handling today? What are we handling this week?’ We couldn’t plan ahead much more than that," she says. "It was partially, what are we doing trying to bring a kid into this world in this moment? And, right now, can we handle becoming new parents or failing at becoming parents again?”

“Becoming a mother triggers feelings of being very, very alive but also feelings of how close we can be to death."

With the world on constant high alert to the dangers posed by Covid-19 (not to mention climate change, natural disasters, and political violence), many women are struggling to reconcile the urge to bringing new life into it. Christina Prinds, a midwife and associate professor at the University of Southern Denmark, researches the transition to parenthood and the existential considerations and practices that come with it. “Pregnancy and childbirth are sometimes the first window we have as humans into some of life’s most prominent questions, which might usually be locked inside us,” she says. “It can make us question how we want to live, what we might have to sacrifice to have children, how we value the other people in our lives, and rethink our spirituality.”

Even without the backdrop of the pandemic, pregnancy underscores our mortality. “Becoming a mother triggers feelings of being very, very alive but also feelings of how close we can be to death,” says Prinds. “I think many new parents can say that sometimes the ultimate existential meaning of birth might actually be that it pushes death away a little.”

To be holding thoughts like this at a time when more than 500,000 lives in the United States have been lost to the virus can feel overwhelming. Combine this with the country’s ongoing economic instability, forced isolation from the support of family and friends, increased complications from contracting COVID during pregnancy, partners being restricted from being at births, high cost of childcare, and it’s little surprise that some American women are rethinking their fertility plans. A study by the Guttmacher Institute conducted last April showed that because of the pandemic, more than 40% of women said they had changed their mind about when to have children or how many to have.

Early numbers from state-level hospital births indicate that the United States is experiencing a “baby bust.” Data collated by Philip Cohen, a sociologist at the University of Maryland, shows that California, for example, saw a 10% fall in birth rates in December 2020 compared with the same time in 2019. Previous world health crises also saw declines in birth rates. A recent study that looked at the 1918 pandemic found there was a steep drop in U.S. births nine to 10 months after the peak in deaths. This is attributed to both the physical effects of the pandemic and behavioral changes around getting pregnant.

Of course, the effects of the pandemic — as with economic instability in general — are not affecting Americans equally. Alison Gemmill, a demographer at the Johns Hopkins Bloomberg School of Public Health who examines recent declines in U.S. fertility, says it’s too early to know who exactly is having fewer babies. “While we see these initial drops that are very striking, I think the bigger questions are: Who is not having kids? Is it first or third births? Is it certain demographic groups?” she says. If you’re not economically secure, it can be less attractive to have a child right now. There’s also less dating happening. Fewer chances for random hook-ups. It may also be that intended pregnancies have held more steady than unintended pregnancies.

Of course, the effects of the pandemic — as with economic instability in general — are not affecting Americans equally.

It’s important to note that decision-making around fertility is not binary. “There’s rich research on women and men’s ambivalence about becoming pregnant,” says Gemmill. “If you ask people, ‘Are you trying to get pregnant?’ a fair amount will say, ‘I’m not trying and I’m not, not trying.’”

Ashley Lawrence, 32, is a music events marketer in Chicago and says while her career focus has meant she’s never had a desire to have a child, the pandemic has cemented her decision to remain childfree for the rest of her life. “I think the pandemic has woken up a lot of people to the problems of this world,” she says. “Everything’s so uncertain with my generation. There’s climate change and college debt. As time goes on, more and more of my friends, especially my girlfriends, tell me that they no longer want to bring children into a world like this, or they can't financially do it in their 30s — and we're running out of time.”

But once *this* is all over, will the baby bust be followed by a baby boom? Are women in the United States delaying births in bigger numbers for now or having fewer babies indefinitely? The 1918 pandemic’s reduction in birth rates was followed by an increase, though that was combined with the country bouncing back from war.

From her research into the country’s already declining birth rates, Gemmill suspects any bounceback might not be big enough to compensate for what’s been lost. “Generally what happens during recessions is that fertility falls and then when things improve economically, fertility tends to rebound,” she says. However, that didn’t happen after the Great Recession — one explanation being that the decline was mostly among teens and women in their early 20s, and it might be that they are delaying having children until they are older, as has happened in Europe.

It’s hard to separate the different factors that might affect fertility choices says Lisa McAllister, an anthropologist at the University of California, Santa Barbara who studies relationships among human reproduction and socioecological factors. “We’re very in tune to our local access to resources. In western societies, that’s ‘How’s your career? How’s your job security?’ That has huge effects on our timing and number of births,” she says. “I think the reason we’re seeing a bit of a bust in reproduction is more likely because of how messed up the economy is.”

There are a number of theories about why “death encourages reproduction.”

However, she points out that there’s a lot of research to support that “bereavements make us want babies.” For instance, after the “mortality shock” of the 2004 Indian Ocean tsunami, there was a local increase in birth rates: Researchers found that women without children before the tsunami had babies earlier in communities that experienced more tsunami-related death. Fertility also went up locally after the Oklahoma City bombings.

McAllister says there are a number of theories about why “death encourages reproduction.” Terror management theory suggests that death makes us feel our own mortality, and having kids is a way for us to feel immortal through biological and cultural continuation. Proximity-seeking theory sees child-bearing as a behavior that seeks to restore closeness. So a drive to have a kid after the pandemic could be one that’s rooted in nurturing relationships in our lives that have been strained.

As A Society We Reflect On The Meaning Of Death. Should We Do The Same For Pregnancy?

This pandemic is different from other mortality shocks in that it's prolonged and the majority of death we’re experiencing is happening among older age groups. “A lot of older people dying shouldn’t affect us wanting children because we expect old people to die,” says McAllister.

Ultimately, existential thinking about birth isn’t commonly looked at in western cultures. And in the U.S., the public conversation around the decision to get pregnant has been dominated by debates over abortion rights.

There are plenty more books, songs, and paintings pondering what it means to die than what it means to start a life. In Denmark, Prinds is advocating for more space in maternal services to incorporate parents’ probing of the meaning of life. Her research shows that when pregnant women are asked about considerations around existential meaning-making, they score high, sometimes higher than terminally ill patients.

“We place a lot more reflection on death as a society,” says Prinds. “For some reason, existential feelings about birth are just not being explored. I think that’s got to do with how we value childbirth and motherhood. From a feminist angle, you could say, ‘Well, everyone experiences the end of life, whereas only women physically experience the first edge of life.’”

Having spent 12 months delaying pregnancy, Ewa Miller is no closer to making a final decision about pregnancy. “I see death in the news, and it’s just these little ping-pong moments that elevate my fears of our parents potentially passing, which then leads to thoughts of babies and ends with this sick feeling in my stomach about running out of time,” she says.

With the vaccine rollout, is she feeling differently about the future? “I don’t know if I would call it hope quite yet, but it’s starting to feel that I can almost begin planning in periods of time that are longer than a week or two. Maybe things are finally getting to a point where soon, we’ll be able to think, ‘OK, what date are we starting this? Let’s plot this out.’”