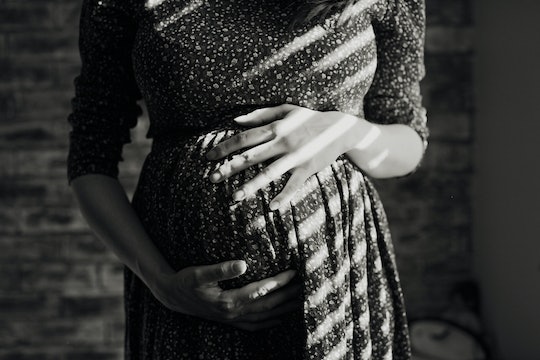 Being Pregnant On Thanksgiving Is Awesome — Until You Go Into Labor

The 2 failed epidurals were the icing on the cake

My mom and tia were coming over to cook the turkey and the in-laws were coming for dinner. I was going to enjoy eating for two on the greatest eating day of the year. That was the plan, anyway. Instead, I was trapped in bed in a hospital gown and was stuck snacking on ice chips instead of mashed potatoes. I was beyond annoyed, hungry, and in denial that I was about to have a baby on Thanksgiving.

Six years ago, I was busy screaming through my second favorite holiday (hello, Christmas #1) in labor and delivery. My firstborn showed up an entire week earlier than she was supposed to, proving that due dates are unpredictable, which not only messed with my plans to host Thanksgiving dinner but also my determination to finish out my pregnancy with a really, really big feast.

Early that morning, my contractions were less than five minutes apart, prompting the nurse to tell us to head on over to the hospital.

My hope was that my daughter would come quickly and I’d be able to have some turkey and pumpkin pie later that night (remember, I had not yet had a baby and did not yet realize the Earth tilted on its axis according to the whims of my kids). But my daughter refused to come out easily. Even with an epidural, my back labor was unbearable and the pitocin did little to move labor along. For hours I would push, take a break, and push again. My daughter was positioned incorrectly which meant the doctor had to try to turn her first using her hands using forceps. Nothing worked. All I could do was push, take a break and push again. It was exhausting. And I was starving!

During the time I was in labor, my husband would take breaks when I rested. He’d run to Redbox (TBT) to check out some DVDs for me to watch, grabbed himself breakfast and some coffee. A few hours later he ran to get lunch and another caffeinated drink. My mom would call to check in to ask if my labor was progressing, and if the baby was here yet (“no… no.”). She also provided updates on how Thanksgiving dinner was coming along because she was at our place cooking a meal as planned. The turkey was in the oven, the mashed potatoes and candied yams were ready, the wine was chilled and the pies were ready to be cut. I was in agony! By 4:30 p.m. the nurses on our floor actually offered to make my husband a plate of food because they were having a Thanksgiving potluck. This is one upside of being in hospital on Thanksgiving — the food is more exciting than usual!

As I was counting down from 10, my family was sitting down to a warm meal.

The doctor on call was clearly over my hope to try and have a vaginal delivery. My labor was not progressing, both epidurals had failed, my daughter was refusing to turn and in all honesty, she acted like she was ready to clock out and head home to enjoy the holiday with her family. Because It was my first delivery and I didn’t realize I could actually tell a medical professional I was not okay with her plan, I accepted that an emergency c-section was the only way to have my little girl.

By the time the doctor told me that I’d need an emergency c-section, my in-laws were just arriving at our place and my husband was trying to calm me down because I was freaking out because my labor was not going as planned.

I eventually elected to go under anesthesia for my c-section because I had already had two failed epidurals and was worried I would feel when they cut into my abdomen. As I was counting down from 10, my family was sitting down to a warm meal.

My daughter was born at 5:53 p.m. on November 22. After surgery, my daughter was placed in my arms and they wheeled us into the hospital room where we would stay for three days. And because I had a c-section and was administered anesthesia, I had to stick to a liquid diet. So when my family came to visit later that night, that meant my husband was able to enjoy the homemade meal while I sipped water and slurped on jello. Did I mention I’m the pickiest eater ever? I basically ate nothing but water and jello the entire time I was in the hospital.

All I wanted to do was go home, eat normal food, and walk without a slight hunch. Recovering from a c-section, especially when you didn’t prepare for one, is not easy. And being away from home during the holidays is tough for someone like me who looks forward to an evening with loved ones. Still, six years and another kid later, I know what I’m actually thankful for. And it isn’t the mash.

More Like This
From Sexy To Spooky, These Pregnant Halloween Costumes Will Make An Impression
Are You Leaking Amniotic Fluid Or Is It Normal Discharge? Experts Explain
Here's How To Keep Your C-Section Incision Dry
What Does Amniotic Fluid Smell Like? A Nurse Explains