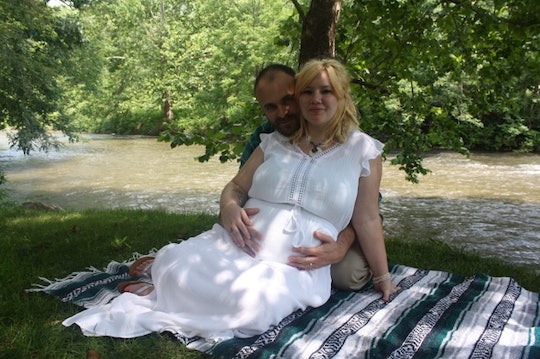 I Tried To Have Sex To Induce Labor, & Here's What Happened

By the time I was 39 weeks pregnant, I was more than ready to have my baby. On top of feeling uncomfortable almost constantly, the anticipation of experiencing labor for the first time and getting to meet my little one was becoming increasingly unbearable. People kept advising me to “enjoy the rest before all the action," but I couldn't help but think: "What rest? Oh, the kind where lying in bed hurts no matter what side I’m lying on, my belly is literally in the way of everything, and I get up to pee every hour? Yeah, that’s fantastic rest, thanks."

Feeling incredibly anxious and apprehensive, the week before I gave birth I did a ton of research on how I could naturally induce labor. I went out walking as much as I could, even though I easily became winded carrying my heavy belly around. Yet by far the most appealing method for me was having sex to help induce labor.

Having sex with my husband in the days before I gave birth was a fantastic way to cope with my pre-labor anxiety, despite how uncomfortable I was.

Although sex during pregnancy has been found to increase uterine activity, and nipple stimulation has been thought to induce labor itself, it's not entirely clear whether having sex can actually kickstart the labor process. Although most doctors believe that it's OK to have sex anytime before your water breaks, we didn't ask our doctor for his permission beforehand: even though he was going to be delivering our baby, I didn't feel that comfortable talking about pregnancy sex with him. We just figured we knew what we were doing in that department, so we decided to give it a shot.

During most of my pregnancy, my husband and I got it on at least once a week. The week before I gave birth, however, we had sex about four times. Those intimate moments with my husband in my last week of pregnancy were incredibly valuable. I knew that in a matter of days, my husband was going to be taking turns with me waking up in the night, changing poopy diapers, and constantly swaddling and re-swaddling our newborn daughter.

Having sex with my husband in the days before I gave birth was a fantastic way to cope with my pre-labor anxiety, despite how uncomfortable I was. After all, according to most postpartum medical literature, we were going to have to wait at least six weeks after I gave birth to start having sex again. By having sex before I went into labor, we had the opportunity to strengthen our emotional connection before diving into parenthood headfirst.

My husband treated me just like he did pre-pregnancy: he still found it enjoyable to undress me and feast his eyes on my pregnant body, and he still commented on how attractive I was while we were making love.

At a time when it was hard to feel like anything more than a bundle of swollen hands and feet, I found that at-term pregnancy sex also did wonders for my body image. My husband treated me just like he did pre-pregnancy: he still found it enjoyable to undress me and feast his eyes on my pregnant body, and he still commented on how attractive I was while we were making love.

Hearing those words from the person I trusted the most in the world helped me re-wire my own thoughts about my body. Since he was just as turned on by me as ever, it was easier for me to make the choice to tune into my own sexuality.

Having an ongoing healthy sexual relationship with my husband during my pregnancy gave me more confidence in my postpartum body image as well. Even though we didn't have sex for a few weeks after my daughter was born, my husband's flirtatious words when he, say, caught a glimpse of me naked went a long way toward helping me view myself as a sexual being post-pregnancy.

Unfortunately, our week-long sex experiment didn’t spur the onset of labor. Four days past my due date, my doctor ended up sending to me to the hospital to be induced right after a checkup, due to my low amniotic fluid.

That said, I wouldn’t call our attempt at a DIY home induction a failure. The year before, while we were trying to get pregnant, we'd had sex countless times, many of which didn't result in me becoming pregnant. Yet those sexual encounters were far from a waste of time. While it's easy to get caught up in having sex for the specific reason of making a baby or inducing labor, we chose not to see it sex as purely goal-oriented or perfunctory. We chose to see it as us loving each other and enjoying each other's bodies, and we still enjoy the memories of this time to this day. We often reminisce, for instance, about the time we laughed our way through finding the right angle for sex, with my huge baby bump staring us in the face.

Although having sex at 40+ weeks didn’t result in jump-starting my labor, I don’t regret giving it a try. The unexpected benefit of bonding with my husband in that time outweighs the fact that the attempts at induction failed. Going forward with any future babies, I’m totally game to make it our own little thing we always do while waiting for labor to start — whether it "works" or not.

Having sex was a source of relief for my aches and pains, as well as an obvious way to bond with my partner.