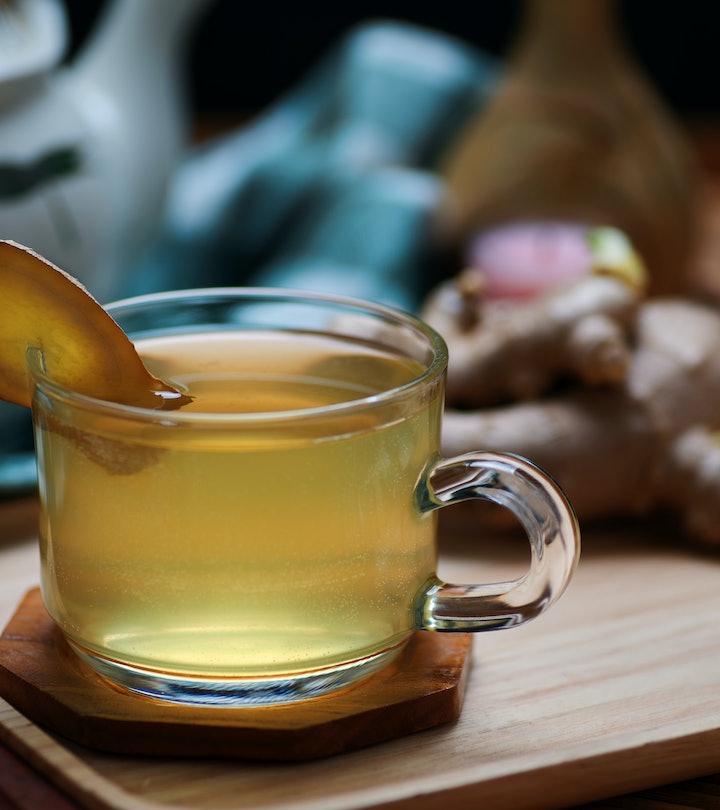 Is Ginger Tea Safe During Pregnancy? Experts Weigh In

Can it be your go-to morning sickness cure?

When you’re pregnant, it’s normal — and even recommended — to start questioning everything you put into your body. It can be stressful to decipher which foods are safe and which are off-limits, and the last thing you want to do is potentially harm your little one. Add in all of the old wives tales and pseudoscientific warnings that exist on social media, and things get even more confusing. It can leave you to start wondering if even something as seemingly innocuous as ginger tea is safe during pregnancy.

Ginger tea is soothing, relaxing, and can help with nausea if you’re experiencing a lot of morning sickness. It tastes great and it’s easy to make at home, whether you’re using a pre-made teabag or brewing a cup with fresh ginger root. But, you may have heard that not all teas are safe to drink when pregnant, and that’s true: Some are too highly caffeinated and a surprising number of herbal teas can be dangerous during pregnancy. Is ginger tea one of them? Here’s what you need to know.

Is ginger tea safe to drink during pregnancy?

If you’re a fan of ginger tea, then it is OK to drink it while pregnant says Dr. Kenosha Gleaton, board-certified OB-GYN. A normal amount of ginger tea — about four cups per day — is considered safe during pregnancy.

Ginger supplements, however, are not quite as safe because the ginger can be concentrated. “An amount that would be above ‘normal’ culinary amounts would be taking ginger supplements,” explains Gina Waggott, certified nutritionist specializing in pregnancy. “These contain very high concentrations of ginger, far more than you could ever eat in food.” So, if you want to add ginger to your diet — or want to use ginger to soothe your morning sickness — make it ginger tea.

Enjoying ginger tea during pregnancy is actually beneficial, especially if you struggle with morning sickness or nausea. “Ginger tea has been shown to reduce nausea and vomiting,” Gleaton says. “Morning sickness is one of the difficult parts of pregnancy, and while there’s no magical cure, you can use ginger tea to help settle your stomach.”

It’s also a nice alternative to coffee, if you’ve decided to cut that out of your diet. “It’s naturally caffeine-free, and pregnant women are advised to keep caffeine below the World Health Organization (WHO) guidelines of 200mg a day,” Waggott says. While ginger tea obviously won’t give you the energy your usual morning latte would, it’s a nice warm drink to sip on to start your day. Lastly, ginger tea is another source of hydration, which is extremely important during pregnancy.

Ginger tea is beneficial for everyone, even non-pregnant people, so it’s a habit you might want to keep up even after giving birth. Some benefits of ginger tea, according to Gleaton, are that it:

Ginger tea is generally considered safe, but there are a few risks to consider before drinking it. While it’s known to relieve nausea, for some, it can have the opposite effect. “Negative side effects of ginger tea are rare, but when people do experience side effects from consuming ginger, they most often report gas, bloating, nausea, and heartburn or reflux,” Gleaton says. “Other reported symptoms include diarrhea and abdominal pain.”

Ginger might also lower blood pressure and could have a blood-thinning effect, so Gleaton recommends that anyone on blood thinners or blood pressure medications should consult their healthcare provider before consuming ginger, especially if they plan on drinking a cup a day.

Overall, though, ginger tea is generally considered safe to drink during pregnancy, and might be a great option for those desperately looking for nausea relief. However, if you’re concerned, it never hurts to call your OB-GYN and clear it with them.

More Like This
How To Increase Your Sex Drive While Pregnant
What Does Amniotic Fluid Smell Like? A Nurse Explains
Are You Leaking Amniotic Fluid Or Is It Normal Discharge? Experts Explain
New Report Shows 80% Of Pregnancy-Related Deaths Are Preventable