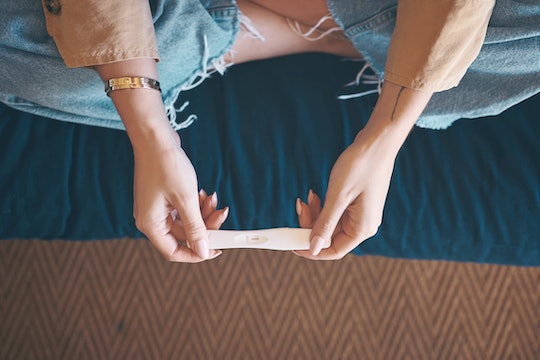 If You’re In Doubt, Here’s What Positive Pregnancy Tests Look Like

Because the answer isn’t always obvious.

At-home pregnancy tests are great because with just a quick trip to the bathroom they have the potential to tell you whether or not you have a baby growing inside you. As convenient as they are, they can also be somewhat difficult to read, so it’s sometimes useful to compare your test with other positive pregnancy test photos to help you figure out what exactly is going on. If nothing else, it sure beats squinting your eyes and questioning whether it’s a line you’re seeing or a figment of your imagination.

If you’ve ever been seriously suspicious that you’re pregnant, you’ve likely taken a few separate tests, just to be sure the result is accurate. This is a really smart practice because results can change, but timing is often the culprit for a false result. “Home pregnancy tests, in general, are reliable and some report 99% accuracy rates,” explains Kimberley Thornton, MD, FACOG, in an email to Romper, “However, these tests assume an individual is testing at the optimal time.” On most test labels, you’ll see a chart indicating that the test is most accurate on the first day of your missed period or later, even if they advertise that you can take it as early as five days (or more) before the day of your missed period. If an at-home test is taken too soon, you risk getting a false negative. “Errors occur if the test is taken too early in the course of the pregnancy,” OB/GYN, Felice Gersh, M.D., tells Romper in an email. “Accuracy requires closely following the instructions [and the] the timing of the test relative to one’s ovulation and fertilization of the egg.”

Other common causes of false negatives, according to Dr. Thornton and Dr. Gersh include general user error, over-hydration (diluting your urine too much), and expired tests. False positives are not nearly as common, but they do sometimes occur. Dr. Gersh says one reason for this is an early or missed miscarriage. Certain fertility medications can also result in a false positive, Dr. Thoronton explains, because women are often doing some form of hormone treatment leading up to conception and if they’re not completely out of your system by the time you test, they could alter your result.

What Does A Faint Line On A Pregnancy Test Mean?

Assuming you’ve followed directions and you’re taking the test at the right time, you can feel confident in your test results, but that doesn’t mean the result will be totally clear. Aside from digital tests, most home pregnancy tests use strips that have a control line (or two) and a test line that will show up if it’s positive. However, that test line can come in all kinds of shades and it can appear right away or after a few minutes. So, how do you know how to read it?

The answer for this depends largely on the specific test you’re using. For the most part, a super-light line on a pregnancy test is considered a positive, it’s just faint because there isn’t a lot of hCG (the pregnancy hormone) in your urine yet, which is often the case when you’re taking the test before your missed period. Typically, if you retake the test a few days later, it will come out positive again, and with a much darker line.

One caveat to this, though, is that if the faint line appears later after the result window has ended, it may not be accurate. Each test has its own instruction manual that will tell you how long you should wait for your result after testing your urine sample as well as how long that result is good for (this can range anywhere from five minutes to one hour, depending on the test).

As for what a typical positive looks like for common brands and test styles, here are some positive pregnancy test photos to compare your test to.

With this test, the control line is on the right side of the result window, and the test line is to the left. If the test line doesn’t appear at all, then it’s reading as a negative result. However, if even a faint test line (in any shade of pink) appears, then it’s considered a positive result.

First Response Early Result tests are very popular because they allow you to test several days before your missed period. However, positive results can be very difficult to read because of the low about of hCG in the urine that early on in pregnancy. For instance, I used this test for both of my pregnancies and the positive line was so faint and thin it didn’t even show up in the picture I took to send to my husband while he was at work.

CVS carries a variety of different store-brand pregnancy tests, but this is their standard one-step option. It has two result windows, a circle that has a blue horizontal control line and an oval to the right with a vertical blue control line. If a second vertical line appears in the circle window (to create a “plus” sign), then the test is positive. Again, even a faint or thin line is considered positive for this test.

Digital tests are by far the easiest to read, like this one just says “Pregnant” or “Not Pregnant” once it has finished processing the sample. One thing to note with digital tests is that they are often less sensitive than the ones that use lines, so your traditional test may look positive but the digital test could read negative. If that’s the case, retest with the digital stick in a couple of days to see if the results change.

Lia pregnancy tests are so innovative because they can simply be torn up and flushed after they’ve served their purpose. The test pad uses a similar line system as traditional stick tests do, with a thick, pink control line at the top of the result window and the test line underneath. This test is absolutely reliable, but its design may make it a little more difficult to read if you’re trying to test early.

First Response also offers its own digital pregnancy test, which is much easier to read than those thin pink lines can be. When it’s positive, “Yes +” pops up on the digital screen to let you know that you’re pregnant. Like other digital tests, though, this one may be less sensitive to hCG, so results will be more reliable the closer you are to the day of your missed period.

Modern Fertility pregnancy tests are designed similarly to other standard sticks, but it also comes with access to an app that helps you track your cycle so you know when is the best time to start testing. That being said, you’ll know you have a positive test if two lines appear in the result window. Keep in mind, the test line (on the left) may be thin or very light pink.

There are two windows on this pregnancy test, with the one on the right displaying the blue vertical control line. The larger square window will have a blue horizontal control line and, if the test is positive, there will be a vertical blue line creating a “plus” sign to indicate you’re pregnant. The blue lines can vary in thickness and shade, so don’t assume a faint line is a negative.

Test strips are typically very cost-effective but can be a bit harder to use because you have to collect your urine sample in a cup, dip the strip into the urine (but not too far or for too long), and then you have a very short window for how long the result is accurate. For AccuMed test strips, there will be a thick pink control line closer to the handle end of the strip, and the test line will appear under it. The test line may vary in shade, but if it’s there and you’re reading the result in the correct window of time, it’s a positive.

Natalist pregnancy tests work like any other traditional stick test. There is a result window on the front which has a pink control line on the right and a pink test line on the left. The test line may show up in various shades of pink, so you might have to look closely to see a positive result (like the one in this picture). What makes Natalist a little different, though, is that it’s a net-zero plastic product, which means for every pound of plastic they produce/sell, they remove one pound of plastic solution from the earth.

PREGMATE is another common pregnancy test strip that you can buy in bulk amounts. Like most other strips, it’s sensitive and needs to be administered carefully and read within a short time window to avoid false results. When the strip is held vertically, with the handle end at the top, the thick, pink control line will be visible at the top of the result window and the test line will appear below it. The test line may be very faint, depending on when you test.

Pregnancy tests are usually the most difficult to read in the days leading up to your missed period (which is also usually when you’re the most eager to find out your result). If you’re testing early and get a negative, remember to do a follow-up test in a few days to confirm the negative result. The closer you are to your missed period, the more accurate, and clear, the test will be.