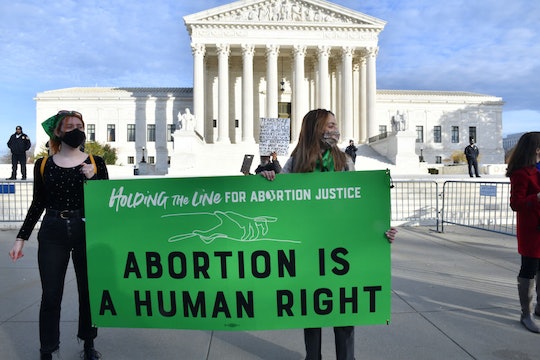 Pregnancy Made Me More Pro-Choice

Anti-abortion activists have told me that getting pregnant would change how I feel about abortion rights. But having my own child has only strengthened my commitment to a woman's right to choose.

Timing is a funny thing. While the United States is facing its largest challenge to Roe v Wade in decades as Mississippi’s 15-week abortion ban is weighed by the Supreme Court, I am a mere two weeks away from giving birth to my first child, a daughter.

Just like older adults love to lecture young people on their impending conversion to conservativism once they reach that top tax bracket or want to get on the property ladder, I’ve heard that my attitudes towards “the rights of the unborn” will evolve as I personally experience pregnancy and impending motherhood.

But the truth is that being pregnant — a choice I very consciously made with my husband — has only solidified my pro-choice views. The effect of hearing the heartbeat, seeing the 2D and 3D scans, feeling kicks and punches and all the rest has made me more personally excited for the birth of our child and, at the same time, more resolute in my conviction that all people have a fundamental right to end a pregnancy they do not want.

I’m certainly not alone in my view. Americans — many of whom are already parents — remain broadly supportive of abortion access. Recent polling from the Washington Post/ABC News, done after the implementation of the recent, highly restrictive Texas abortion law, finds that only 27% of Americans think the Supreme Court should overturn the landmark abortion decision Roe v. Wade. In contrast, 60% believe Roe should be upheld and 75% of Americans are in favor of leaving the decision to have an abortion to a woman and her doctor versus 20% who believe it should be regulated by law.

The overwhelming support for abortion indicates that Americans know “it takes a village to raise a child” and that that extends to both the decision to have a child and then to raise it.

Overall, 84% of Americans support abortion-ban exceptions in the case of rape or incest and 74% support abortion if the child will be born with a life-threatening illness.

It’s clear that the Supreme Court would be wildly out of step with the attitudes of the country if it upheld the Mississippi law. But the numbers reveal an even deeper and more textured reality about American’s views on abortion.

Opponents of abortion make the argument that women’s rights to bodily autonomy are trumped by a fetus’s right to be born, and that once a baby is born, a pregnant person can opt to put the child up for adoption. By this argument, the burdens of parenthood need not extend past pregnancy if a woman does not want them too.

But I think the high support for access to abortion reveals that Americans know this argument doesn’t hold water. Americans’ views on this topic are shaped by not only their own experience, but also those of people they know in their communities. Data find that one in four women will have an abortion by the time they’re 45 years old, a large percentage but nowhere close to the level of support access to abortion commands. The overwhelming support for abortion indicates that Americans know “it takes a village to raise a child” and that that extends to both the decision to have a child and then to raise it.

For me personally, the extent that a woman needs that village from the moment she gets pregnant couldn’t have been clearer. From the moment I became pregnant, I had a support system in my husband, my family, his family, my friends and my two places of work, and the doctors and nurses who have cared for me. Frankly it’s hard to quantify how much explicit and implicit support I’ve gotten, not to mention the impact of having high quality, employer-provided insurance that has covered the bulk of my expenses. Furthermore we have undertaken this pregnancy secure in the knowledge that we are financially able to give our child a comfortable life.

My good fortune has only made it clearer to me that pregnancy requires a tremendous amount of support. But three quarters of Americans also know this, and that’s why they believe a person should only continue a pregnancy if they and their doctor believe it is the right and safe thing.

My own pregnancy has also made me indignant at the ghoulish argument that pro-lifers often make that people who are pro-choice aren’t phased by the realities of abortion. As countless women have attested to, there is nothing simple about the decision to terminate a pregnancy whether it’s at the six-week mark or in the third trimester. No person will make that decision lightly, even when it’s absolutely the right thing to do considering the circumstances.

The effect of hearing the heartbeat has made me more excited for the birth of our child and, at the same time, more resolute in my conviction that all people have a fundamental right to end a pregnancy they do not want.

I’m no Pollyanna. I know that there isn’t ever a “right time” to have a baby and that with all the joy it brings there are also manifold challenges even for those of us who wanted to go on this grand adventure. I also know that there will be many who read this piece and think I am one of those ghouls, even though I am seeing my pregnancy through.

Who could hear that heartbeat, see those scans, and feel those kicks and say they are even more committed to the idea that abortion access is a fundamental right? Someone who respects the profound humanity of woman, who believes that women’s liberty is protected by the constitution, and who understands personally how difficult reproductive decisions are to make, that’s who.

I cannot wait to meet my child, to teach her what it means to be a person in the world, to watch her learn it for herself. I hope she, and all the children born this year, grows up in a country where women have their right to liberty and citizenship upheld, and where archaic abortion bans are struck down from the lowest to the highest courts in the land.

Jessica Tarlov is a Democratic strategist and the vice president of research and consumer insights at Bustle Digital Group. She is a contributor to Fox News where she appears as a self-described “defender of the Democrats.”