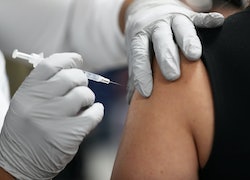 An emergency room physician, Dr. Lauren Westafer had to decide in December if she would get vaccinated in the first trimester of pregnancy. Here's how she made her choice..

Lauren Westafer, 36, is an emergency room doctor and mother of two based in Western Massachusetts. She is the first trimester of pregnancy and elected to receive Pfizer’s COVID-19 vaccine. She has been open about her decision with her colleagues and on social media, and she agreed to speak to Romper about being vaccinated.

I am currently in my first trimester of this pregnancy. My wife and I had been trying to get pregnant for several months — I have been through fertility treatments, though not IVF. In the past, with my first two children, I haven’t disclosed that fact as early. It’s the most sensitive time in a pregnancy. When a pregnancy test turned positive the first week of December, I was elated, but also immediately realized that this would complicate my decision to get the vaccine.

I’m very risk averse in pregnancy. I’m a researcher but I’m also a little superstitious. My first instinct was I can’t get the vaccine because there are too many unknowns. But then I had to ask myself: What am I so worried about?

How She Made Her Decision

I’ve been tracking the vaccine candidates for quite some time. I always knew I was going to be first in line for the vaccine, long before I was pregnant. This is something I believe in. Vaccines are some of the safest and most effective medicines we have and this is our way out of the pandemic.

I have a lot of experience looking at data. In addition to being an emergency physician, I am a researcher in something called implementation science. I study how we get doctors and healthcare systems to do what the evidence says we should do. There’s often a 10 to 20 year lag in getting people to practice evidence based medicine, and we need to shorten that. I also have a podcast about emergency medicine, and since March, my co-host and I have been putting out four to five episodes a week, many of which have been about COVID.

The initial information on the Pfizer and Moderna vaccines was very promising. When the first press releases dropped, Pfizer was 90% effective and Moderna was 95% percent. I’ve also known several people in the trials.

I’ve heard people say that vaccine development was rushed, but there’s a difference between rushing and moving quickly. The process has been done quickly through great partnerships, but no steps have been skipped.

Evaluating the Risks of the Covid-19 Vaccine

First you have to understand how this vaccine works and whether it could cause harm to an unborn baby. This vaccine gives a little code in the muscle of your arm which then degrades; it’s like a Snapchat message. None of the vaccine gets in your bloodstream or is likely to get into your placenta. The message prompts your body to produce a spike protein and you mount the immune response — your body uses the same technology as the virus, , except you don’t get the virus. The fetus is not getting the immunization. The fetus, if anything, is getting antibodies. But they’re not getting the mRNA.

You don’t get sick from the protein, you just some of the side effects of mounting the immune response. So there is a risk of fever from the vaccine, but I can take acetaminophen for that, and it’s one of the safest drugs to take during pregnancy.

Second, I thought about the risk of miscarriage. It’s true that the vaccine trials did not include pregnant people — they’re rarely part of early phases of drug research — but the Pfizer trial ended up including 23 people who discovered they were pregnant while enrolled; about half were in the vaccine arm and half in the placebo arm. Several of the pregnant women in the Pfizer group did have miscarriages, but all the miscarriages happened in the placebo group.

We’ve worked hard for this pregnancy, and I did not want to jeopardize it. The risk of miscarriage regardless of getting a vaccine is higher because I am over 35. I realized that if I got the vaccine and had a miscarriage, I couldn’t assume that one caused the other. Viruses and sickness also cause miscarriage. I’m already at risk for that because my community cannot control the spread of Covid.

The Biggest Risk Is Covid Itself

I have a very real risk of getting Covid that I cannot escape. Pregnant women are at a higher risk of severe illness and death from this coronavirus. In addition, there's the danger of potentially infecting my children and my elderly mother-in-law, who lives with us.

We have a culture of blaming and shaming women for anything that happens to a fetus.

When I went public with my decision on social media, I was vilified by many for not being more concerned that the vaccine would cause abnormalities in my baby. People have attacked me and said I was unfit, but you cannot carry a child to term if you’re dead.

How She Feels Now

I was worried I wouldn't feel that sense of relief. I was confident in my decision but it’s a big moment and I of course I was nervous. But the sense of relief I felt immediately was enormous. I won’t have to worry so much about coming home from work. I was just convinced that one of these days I was going to give it to someone in my family.

I also feel glad that I can help the medical community to better understand how this does work in pregnant people. I would never use my unborn child as an experiment, but having made the decision, I am glad people can learn from my experience. In fact, as of late January, more than 15,000 pregnant people in the United States have received an mRNA vaccine.

The job I signed up for is to take care of sick patients, to resuscitate people and be the first 20 minutes of any intervention. But this is different. We’re used to someone needing our help and we just run. Now we have to stop and put on all this PPE and masks. I have never conducted so many end-of-life conversations over the telephone. I have never had to talk people out of coming into the hospital. We’ve never had to install iPads in rooms and find ways to evaluate people remotely in order to conserve PPE.

Before, part of my job was to deliver terrible news, the worst news someone will ever hear, but to do it in a way that they know you’re there for them. With Covid, there are all these barriers between me and the patient and it’s made that connection almost impossible.

If you are pregnant and considering a Covid-19 vaccine, Dr. Westafer recommends this decision guide developed by physicians. You can learn more about her podcast, FOAMcast, here.