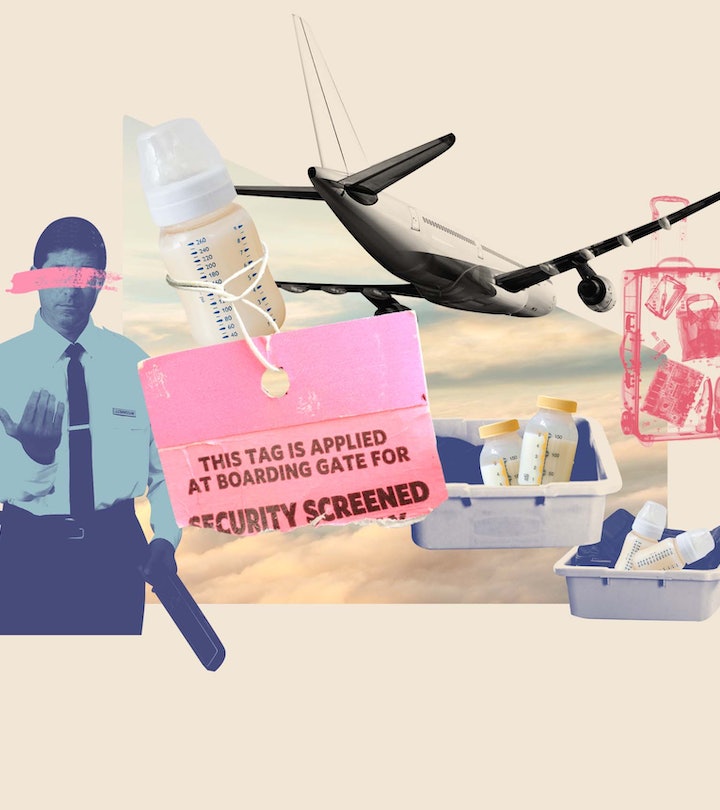 It seemed like the first time these men had ever been confronted with milk that hadn’t come from livestock.

“Where’s your baby?” asked one of the men in uniform.

“So why you have this?” he asked with a scrunched face. “Drink is only allowed if baby is with you.”

He was doing his best not to look at the long silver table beyond the X-ray scanner where a row of rectangular plastic bags stood, each visibly filled to the top with milk. Some were slumped, sweating as if they knew they were about to lose a fight. Another uniformed man glanced at the bags and then looked away in discomfort.

It was 2019 and we were in an airport in the Middle East. I was one of the nearly 9 million travelers who would pass through the airport that year.

“But my baby needs it,” I pleaded. “This is her food for next week while I’m at work. If the baby were here, she would drink the milk from me and I wouldn’t need to take these.”

Now I was cradling an invisible child to my chest and gesturing wildly to the breast milk storage bags. Some people slowed to watch the scene. A police captain arrived. He spoke perfect English and his eyes were kind, a color somewhere between gray and green that I couldn’t name.

“I was here for work,” I explained. “I bring these through security all the time in the U.S. and other countries without any problems.”

But it seemed to be the first time these men had ever been confronted with milk that hadn’t come from livestock.

“I will call the office and see if there is anything we can do,” the captain said.

My daughter E. was 9 months old then. On this trip, I had spent hours pumping and transferring roughly 70 ounces of milk from my breasts into those plastic containers. Because I had been away from her on several work trips already, the stash of frozen milk I had built up at home was quickly evaporating. True, my husband and I could have put baby formula in her bottles, but I was militant in my mission for her to be an exclusively breastfed baby for the first year of her life. It was the only thing keeping my confidence afloat in a sea of overachieving moms.

I was cradling an invisible child to my chest and gesturing wildly to the breast milk storage bags.

E. breastfed enthusiastically from the moment the doctor placed her on my chest in the delivery room. That’s when our bodies made an agreement rooted in the law of supply and demand — she would suckle and I would make adequate amounts of milk, the “liquid gold” so high in nutrients that lactating women sometimes sell their excess to bodybuilders.

But it all grew complicated when maternity leave ended. I had to keep my supply up during the workday so that I could continue breastfeeding. That meant pumping at work several times a day. This required many tools: the electric pump, the tubing that connected the machine to the breast shields, duckbill valves, bottles, milk storage bags, a little cooler with an ice pack and a nifty hands-free bra that held everything in place so that I could respond to emails immediately and take calls.

When I was on the road, which was often, I had to lug the equipment with me. I pumped all over the place. In rental cars while racing to catch cross-country flights; near the infant changing tables in the bathroom at LaGuardia, in full view of the long line of women filing by to use the toilet — most tried not to look, but I remember one woman patting me on the back and saying, “Good for you.”

I pumped in tiny airplane bathrooms and surreptitiously in my seat on Amtrak trains. I pumped in airless lactation pods at convention centers; in hotel rooms while I ate breakfast or dinner alone; inside a science lab on the Yucatán peninsula, a hut in Jamaica, and on a dusty, endless road in the Middle East.

With my first child, E.’s older sister, I had been achingly self-conscious about pumping. “Got to go make lunch for the kid!” I’d announce before heading to the supply closet that had been converted into a mother’s lounge, laughing at myself before anyone else could.

But by the time I became a mom of two, I no longer felt embarrassed when a TSA agent would swab each milk storage bag for bomb residue as curious travelers looked on. Walking past dozens of co-workers in the open-plan office to get to the mother’s lounge and knowing some of them would be able to hear the wheezing of the electric pump was no longer shame-inducing. I even had the courage to confront a colleague who banged on the door because he wanted to use the room for a phone call, not knowing someone was inside.

I recently became a mom of three and I’m back on the road. This time around, I know pumping will be too overwhelming for me. Despite my misguided aversion to formula, it was eventually all my little guy drank, and he had no complaints. I think about the other new parents heading back to the office now, in what deceptively seems like a post-Covid world. I think of the breastfeeding moms toting their pumps to windowless rooms, washing parts in a shared office kitchen, nervously counting their freezer stash. Will they get the support they need, or feel comfortable asking for it?

“Don’t cry over spilled milk,” the saying goes. But back at that airport just three years ago, my tears were ready to roll. I realized I hadn’t understood the rules I read online about flying with liquids from this airport. I should have looked harder for dry ice, even if I didn’t really believe it existed in that part of the desert. I should have found it somehow and then paid an exorbitant amount of money to ship the fat bags home. Now they were on this sparse table, sweating in shame. Why had I assumed I’d be able to breeze through security in a country where gender bias made it nearly impossible for women to leave their homes for work?

“I don’t think this is going to happen,” said my colleague. She had kids but looked surprised each time she asked if I was still “doing that pumping thing” and my answer was “yes.” I would stretch the time between my pumping sessions while at work, feeling like I was inconveniencing everyone except for E. when I had to step away.

It was futile to keep up a fight in which the rules were made by men who didn’t understand what it took to have two personalities: mother and professional.

I told my colleague I wasn’t leaving. I had just spent nearly a week away from E. and her older sister. I felt incredibly guilty about the trip, as I did during all my travels. That guilt would often book me on a redeye instead of allowing me to spend one more night in a hotel getting some sleep. If that milk went down the drain, so would my self-worth.

The nice captain came back.

The officer who initially stopped me was clearly angry.

“Hurry up,” said my colleague urgently. “Get them and let’s go.”

I started to gather the dozen or so bags as everyone watched. I knew they were all willing me to be quiet and deferential, and I thought that was the best plan of action. That’s why my voice surprised everyone, including me.

“The rules don’t make sense, you know. It’s not fair to working moms. You shouldn’t do this to other women.”

My breath came fast as I began walking away. I heard the first officer yell to get my attention. I turned and saw pure rage on his face.

“You leave that here,” said the airport officer. I looked to the captain for help, but he only apologized.

“But you just said it was OK.”

“Those are the rules for travel to the U.S.”

I stood frozen. I wanted to scream. I wanted to sob. I wanted to take the bags and run toward my gate. But then it became clear to me. It was futile to keep up a fight in which the rules were made by men who didn’t understand what it took to have two personalities: mother and professional. I had lost. The milk would go to its final resting place in an ordinary trash can already filled with discarded water bottles and toiletries.

I pulled the bags out of the cooler and lined them up on the table. I faced the first officer and gave him a small smile, holding back my tears.

“Throw it away yourself,” I said, knowing the task would be revolting to him.

As we walked off toward the terminal, my colleague turned to me.

“You should have just kept quiet.”

Maybe, I thought. But then no one would have heard me.

More Like This
Reddit Is Stunned By Mother-In-Law Trying To Breastfeed Her Granddaughter
What I Want To Tell My Kids About Anxiety When The World Feels Unsafe
My Nanny Showed Me How To Be A Mother
Infertility As A Stepmom Means Double The Alienation, But So Much Love