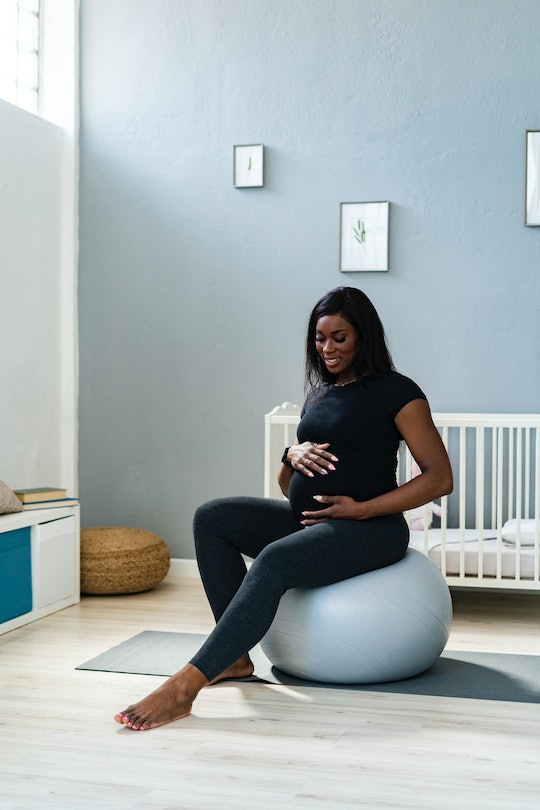 Everything You Need To Know About The Pregnancy Hormone Relaxin

The hormone may play a major role in conception, pregnancy, and delivery.

If you’re pregnant, it can be frustrating to hear every symptom, every mood, and seemingly every physical pain blamed on “hormones.” While they may not be the sole reason for the barrage of emotions one experiences as an expecting parent, the truth is that hormones play an enormous role in pregnancy — and not just the estrogen, progesterone, and oxytocin with which you might already be familiar. The hormone “relaxin” gets thrown around in baby apps and books a lot, but what does it actually mean?

“Relaxin is a hormone, belonging to the superfamily of insulin, that is made in both men and women. It affects the connective tissue component of the body,” Dr. Kecia Gaither, double board-certified in OB-GYN and Maternal Fetal Medicine, tells Romper. “Relaxin can act as a growth factor and it aids in metabolism regulation. Relaxin has effects on brain and pituitary gland function and it assists in the retention of fluid balance.”

So what does relaxin have to do with a pregnancy? Turns out, the hormone can have super-important jobs to perform during conception, pregnancy, and the actual labor and delivery. “Relaxin is a hormone of pregnancy with a wide variety of effects in the heart, vasculature, lung, kidney, and liver,” Dr. Judette Louis, department chair for the Department of OB-GYN at University of South Florida, tells Romper. “Relaxin increases the ability of the artery walls to stretch, reduces resistance in the blood vessel system, and increases cardiac output, which is the amount of blood pumped out of the heart.”

Relaxin can come from the corpus luteum, and once a person becomes pregnant, it can also be produced by the placenta. The amount of relaxin in your body goes up post-ovulation, as per the Hormone Health Network; you can think of it as part of the prep team to get a body ready for a potential pregnancy. If there’s no conception, the amount of relaxin goes down, and the cyclical process repeats.

What Exactly Does Relaxin Do During Pregnancy?

In regards to conception, Gaither says, “Relaxin is felt to aid in uterine preparation for implantation, relaxes the uterine wall to prevent contractions, which can hinder successful implantation of the fertilized egg.” Gaither adds that, during pregnancy, “Relaxin keeps the uterus quiescent, [and] helps to prevent preterm labor by preventing contractions.”

Dr. Louis shares that relaxin is also important for, among other things, the softening of the birth canal during pregnancy. “It's essential that adequate oxygen and nutrients are transferred to the developing fetus — relaxin relaxes the vasculature to allow increased blood flow not only systemically, but within the uterus,” Gaither tells Romper. And Dr. Louis shares, “Evidence also supports a role for relaxin in the adaptions of the mother’s vascular system that is required for a healthy pregnancy.”

And if you’ve gone through months of pregnancy, you might recall some discomfort in your lower half. “The front of the pelvic bone — called the symphysis — starts to separate and loosen around 10 [to] 12 weeks of pregnancy due to high relaxin concentrations which can cause pain in the pelvis or hips,” says Dr. Kelly Culwell, an OB-GYN (more commonly known as Dr. Lady Doctor) who’s worked with the World Health Organization and Planned Parenthood. So apparently relaxin’s role can often be felt throughout the body.

What Does Relaxin Do During Delivery?

Its highest during the first trimester, says Culwell. But then later in pregnancy, “It relaxes the muscle wall of the uterus and helps to get the pelvis and cervix ready for delivery.” But its job is far from over. “In preparing the body for childbirth, relaxin is involved in stimulating the growth, softening and opening of the cervix and vagina, prompts membrane rupture, and relaxes ligaments within the pelvic girdle to assist with vaginal delivery,” Gaither says.

Should You Be Concerned About The Levels Of Relaxin In Your Body?

As always, you can talk to your doctors and caregivers about your road to pregnancy and discuss the role of relaxin. Louis tells Romper that there aren’t any “recognized signs or symptoms of altered relaxin levels.” With that said, Louis shares, “People with low relaxin are more likely to have a history of recurrent miscarriage and an increased risk of preeclampsia and early pregnancy loss.”

Outside of pregnancy, relaxin may also have a role in other conditions: “Disorders of relaxin can present with abnormal uterine bleeding, endometriosis, fibromyalgia, and scleroderma,” Gaither says. So if you’re experiencing the latter, consider bringing up the hormone in talks with your healthcare team. “In addition to pregnancy, relaxin may also play a functional role in the uterus during the menstrual cycle, and modified relaxin activity — decreased levels locally — may contribute to gynecological disorders such as uterine fibrosis and endometriosis,” Louis says.

Judette Louis M.D., MPH, department chair for the Department of OB/GYN at University of South Florida, author, and specialist in Maternal Fetal Medicine

More Like This
Can The Way You Sleep Really Turn A Breech Baby?
Here's The Best Time To Remove Your C-Section Tape
A C-Section Actually Doesn't Take As Long As You Think, According To Experts
Breaking Down The Different Types Of Postpartum Infections