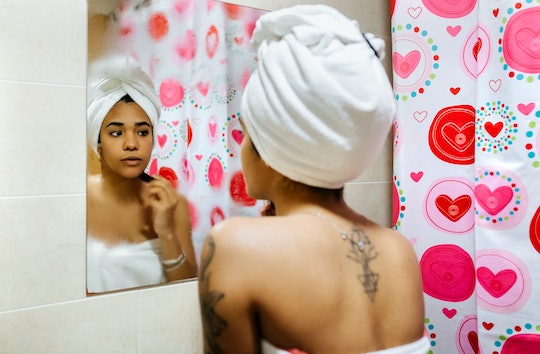 Can You Shower After Sex If You're Trying To Get Pregnant? Experts Explain

When to suds up if you’re trying to conceive.

When you’re ready to try for a baby, it’s natural to second-guess some of your regular routine. For instance, can you shower after sex if trying to get pregnant, or will all that washing decrease your chances of conception? Here’s what two OB/GYNs want you to know about hitting the shower after intimacy.

Will showering after sex hurt your chance of conception?

“Showering wouldn't have a significant impact on conception rates since it would mainly be washing away any semen outside the vagina,” Dr. Sanaz Ghazal, MD, FACOG, Co-Founder & Medical Director of RISE Fertility, tells Romper. Taking a shower right after sex is fine if you’re trying to conceive, Mary Jane Minkin, MD, clinical professor of obstetrics and gynecology at Yale University School of Medicine, tells Romper. It isn’t likely to make a big difference either way.

It’s helpful to remember that sperm are pretty dang fast, too. “Sperm are pretty good swimmers and studies have shown that sperm deposited at the cervix can travel to the fallopian tubes in as little as 2 minutes,” says Dr. Ghazal. It’s entirely possible that any conception-ready sperm will already be in place by the time you turn on the shower faucet.

What about a bath?

Taking a soak in the tub is a different story, however. “The impact of a bath on a person's ability to conceive depends partially on timing. If you take a bath immediately after sex, water can enter the vagina and wash some of the sperm away. However, some of the sperm may have already passed through the cervix, which means that you could still conceive,” says Dr. Ghazal. For the most part, “we wouldn't recommend that she bathe right afterwards,” says Dr. Minkin, who recommends waiting about 10-15 minutes to give the sperm a “head start” toward the cervix.

Here’s what doctors wish more people understood about conception in general. “There are a lot of misconceptions about what to do and not to do after sex if you are trying to conceive,” says Dr. Ghazal. “With fertility, there are things you can control and things you can't and a one-size-fits-all approach doesn't work for everyone.”

In the “things you can control” category, peeing right after sex is not likely to hurt your chances of conception because urination isn’t going to wash out all the sperm or anything. But douching right after sex is one of the top things your OB/GYN wishes you’d stop doing after intimacy, because it rinses out good bacteria and sets the stage for an infection.

If you have any specific questions about conception and what lifestyle factors can affect it, don’t hesitate to reach out to your doctor for guidance. The journey to conception can be a stressful one sometimes, but at least you won’t have to give up hot showers after sex anytime soon.

More Like This
A Mother’s Day Garden Of Grief
Are Movie Theaters Too Loud For Pregnant People? OB-GYNs Explain
All The Reasons Why You Might Have A C-Section
All Your Questions About Getting Pregnant After A Tummy Tuck Answered