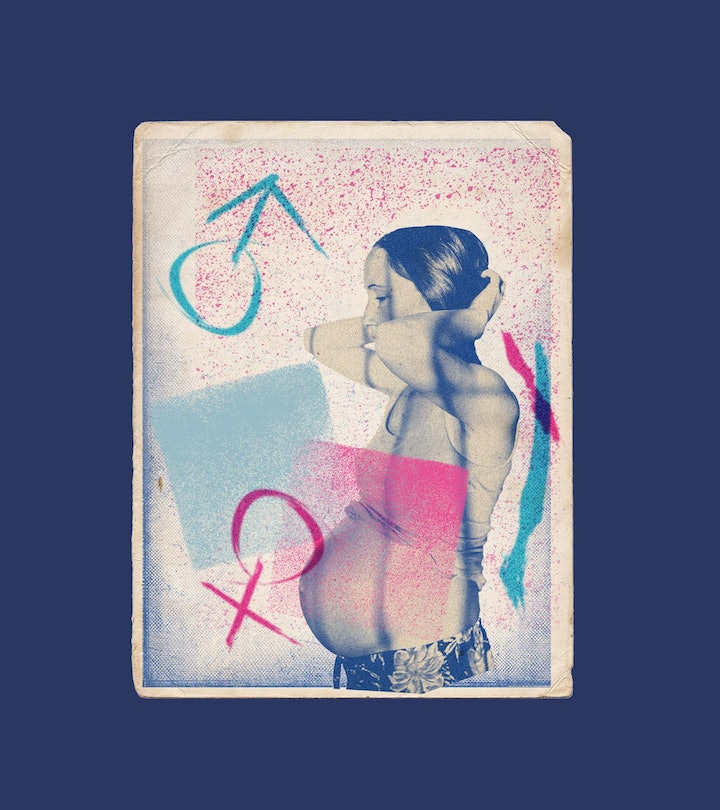 Gender Is A Construct, But I Still Wanted A Girl

We were modern, progressive people, so why, exactly, did we care so much?

Years before I got pregnant, I decisively hoped for a baby girl. I pictured her having my same blond curls, mischievous laugh, and bookworm tendencies. I’d be a better mother to a girl, I reasoned. I could offer concrete advice about periods, help her make sense of sexism, and nurse her through that distinctly female scourge of middle-school clique drama. I could pass along my feminist ideals and make sure she didn’t feel too hemmed in by gender roles. Plus, female baby names were so much better, and I didn’t want the stress of wondering if I was accidentally raising a male misogynist. This fall, by way of a genetic test I took at only 11 weeks pregnant, I learned the sex of my baby: female. I felt satisfied, relieved, even elated.

Meanwhile, my partner Dom experienced what I would later learn is called “gender disappointment”: He was hoping for a boy. He imagined, like I had, that he’d have an easier time relating to a son and that it would be a powerful experience to vicariously re-live and improve upon his own boyhood. He’d always had pretty traditional masculine interests, from sports to science to woodworking. But his desire was less about gendered toys and activities — girls could also like trucks and tools, after all — than sharing the experience of being male (and being perceived that way) in the world. He recognized all of this as “extreme vanity,” he conceded. He wanted to create “a more perfect mirror image” of himself.

My desire for a girl — and the story I was already telling myself about her life — were steeped in some of the same conventional gender norms that I deem outdated in so many other contexts.

As our gut reactions folded into the emotional roller coaster of impending parenthood, our respective desires about the baby’s sex started to seem bizarre to me. We were modern, progressive people who were well aware that gender was a construct. So why, exactly, did we care so much, and why did we presume we’d be able to relate better to someone with our same genitalia? My desire for a girl — and the story I was already telling myself about her life — were steeped in some of the same conventional gender norms that I deem outdated in so many other contexts. Who’s to say I wouldn’t see more of Dom’s personality and interests in my child? Who’s to say she would even stay a girl? In a world where the youngest generation keeps stretching the limits of gender norms, where kids often realize they’re trans at young ages, it seemed almost absurd to wish for a vagina or a penis, if that very well might be irrelevant in 15 years.

Granted, it wasn’t irrelevant now: Even if our kid eventually decided to flout gender expectations or change genders altogether, even if we vowed to raise a “theybie” and take a completely gender-neutral approach to parenting, she’d be socialized as a girl by the rest of the world for a crucial number of years. I couldn’t shield her from the sizable part of the population who wouldn’t think twice about throwing a pink-or-blue-laden gender reveal party — or the people who are actively engaged in a backlash against the expansion of gender identity. My friend Bettina has noticed that “very young kiddos” often absorb traditional gender roles, even in ultra-progressive circles like hers. Her son is not yet 3 years old, and yet his “little gal pals are much more down to enjoy some imaginative and quiet play while his guy friends are (like him) wild monsters tearing up a room and making a mess with alacrity.”

And those progressive parents aren’t free from gender expectations, either. “You’ll hear parents of boys anxiously say, ‘Oh, my gosh, he only likes girl shows; he likes to sing and dance,’” says MJ, who identifies as nonbinary and transmasculine and is raising two female toddlers in Brooklyn. “It’s not quite the genderless world conservatives think it is. There are still rigid norms put on kids.”

It’s a tall order to maintain ideological purity at all times, even just in your own head.

In other words, it wasn’t that weird of me and Dom to assume that our child would be aggressively socialized, and therefore would have some of the same childhood experiences as me as a result of her early socialization. Most people can admit that, even in our evolving world, it’s nearly impossible to treat your baby’s biological sex as just another piece of information. Still, I felt uneasy. Old-fashioned. Unimaginative.

Part of it was my guilt for not being content with a healthy baby; I barely celebrated that the same genetic test gave my provider 99% confidence that the baby was chromosomally normal. But most of my shame was about my inability to reconcile my politics with my inner desires. Though the idea of gender reveal parties squicked me out, how different was I from those parents if I “threw a little gender reveal party in my heart,” as Willa Paskin put it on her podcast, Decoder Ring? I’d experienced this cognitive dissonance before in other contexts: sexual proclivities that reinforce gender roles, for instance, or a secret wish to be rich despite my commitment to democratic socialism. It’s a tall order to maintain ideological purity at all times, even just in your own head. When it comes to a change as primordial and consequential as becoming a parent, the futility of this becomes clear.

When I shared my feelings with parents or pregnant people I knew, I was heartened to find out that they fiercely related. I spoke to several women who had a visceral adverse reaction to finding out that their fetus was male. Before Rachel found out her baby’s sex, she was convinced she was having a girl. She’d always been close with her mother and assumed she’d be able to have the same bonding experience with her daughter. She imagined that her husband Jordan’s enlightened masculinity would be reflected in the tenderness he would give his baby girl.

Then she found out she was having a boy. “I really spun out in a way that totally surprised me,” says Rachel, who was 24 weeks pregnant when we spoke on the phone. “I felt depressed and a sense of dread.” Despite the fact that her pregnancy was very much planned, she even had a fleeting thought of “Can I have an abortion and just start over?” It made her realize just how “very alienated” she suddenly felt from her child.

“We can raise them to be really proud of being girls, and also still keep these early years as a space for them to figure out who they are.”

Mara*, who’s 20 weeks along, also had major angst about having a boy. She worried about the deluge of societal ills in which her child would be bathing. “Girls aren’t school shooters,” she thought. She had visions of violence, of the world leaders starting wars, of the worst and most extreme masculinities out there. Alicia*, whose firstborn is a boy, “didn't really want a boy because I... sort of hate men? And I felt worried about having to raise one and doing a good job and not having them turn out to be a sh*tty person.” It turns out that discovering your baby’s sex can provoke a robust misandrist streak in some women.

It can also unearth unacknowledged feelings about one’s own gender. Before they had children, MJ mostly identified as a cis woman. Then pregnancy transformed their body into a hyper-feminine version of itself — “huge boobs, huge pregnant belly” — and they had a strong assumption that they were carrying a boy. “I only thought about boy’s names,” they say. “I’d never even contemplated raising a girl.” MJ realized this was because of latent gender dysphoria, that they felt alienated from their own childhood.

Having two girls in quick succession completely scrambled MJ’s expectations of parenthood. Though the kids mostly use “she” pronouns, MJ and their husband make a conscious choice not to emphasize gender in their home — which, in turn, makes MJ worry that “we’re not a girl power home. I don’t say things like ‘Girls can do anything!’” The couple’s plan is to make sure there are lots of strong, brilliant role models around the kids who identify as women. “We can raise them to be really proud of being girls, and also still keep these early years as a space for them to figure out who they are.” After talking to MJ, it occurred to me that perhaps I wished for a girl precisely because I assumed she’d have more latitude to figure out who she is. Nowadays, men seem to struggle more than women with challenging the limits of their gender and tend to be punished harshly when they do so.

Overall, it was a comfort to know that with MJ and everyone else I spoke to, their initial harsh reactions faded into more nuanced, generous — dare I say human? — lines of thinking. “I had to remind myself of all the wonderful men I know,” Mara says. “Why I like them, why they’re kind. I thought of my kids’ friends who identify as boys. Why am I judging my own child when I don’t judge my friends’ male children?”

After that dark period of gender disappointment, Rachel is now “obsessed” with the idea of her son. And who cares if her boy ends up playing with race cars and firetrucks? The important thing is “making sure my child has a vocabulary for feeling an emotion,” she says, and “learning to be a kind, sensitive person.” It was crucial to raise good men, too, she realized, maybe even more crucial. “History has been built upon violent masculinity,” she says, “and we really do need to dismantle that, one boy at a time.”

*name has been changed to make sure these women’s sons aren’t traumatized after a Google search in like, 2032