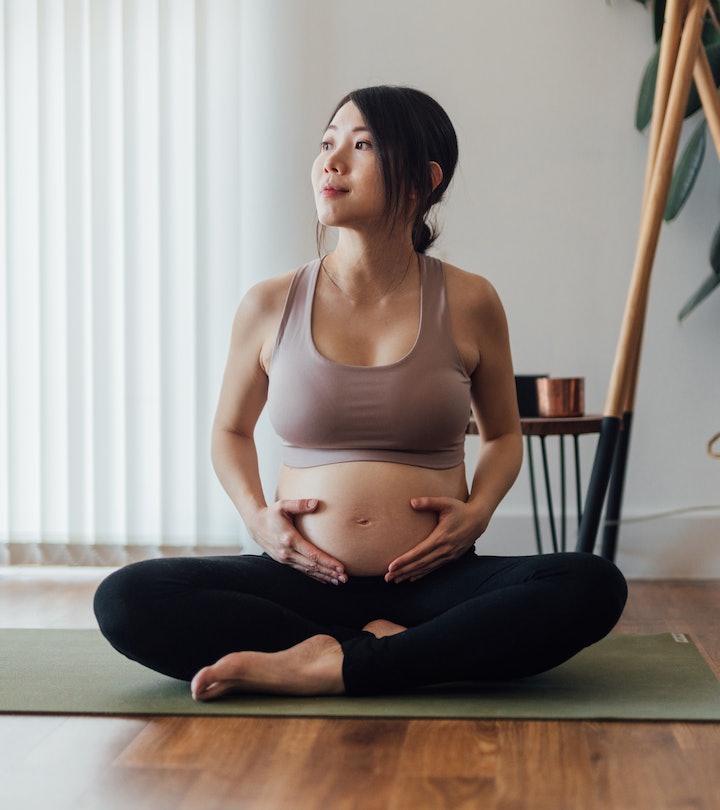 I Was Supposed To Want A VBAC — So Why Didn’t I?

I don't regret my C-section, but I do still feel the need to justify it.

Somewhere in my third trimester, I started lying to the other women in my prenatal yoga class. Each week, before our moon salutations, we opened the session with a check-in: updating each other on our baby’s kicks, how much our backs hurt — and as our bellies grew, our birth plans. Perhaps not surprisingly (it was yoga, after all), these women wanted so-called natural births. Many planned to use visualization techniques to deal with contractions instead of an epidural. Most hired doulas. Some were even planning to give birth in their living rooms.

I’d been the same way with my first pregnancy, two years before (minus the homebirth thing). Making a birth plan had been easy: I went with the standard Earth Mama format, with its extended menu of birthing positions and warnings against offering me pain meds. I didn’t even read the cesarean section chapter in the childbirth book, blithely assuming it wouldn’t apply to me. But the natural birth I’d expected turned into an emergency C-section after 23 hours of labor anyway.

Now, pregnant with my second child, making a birth plan was a lot more complicated. I had to choose between scheduling a repeat C-section and going for a vaginal birth after cesarean (VBAC) delivery. This should have been an easy decision, I kept telling myself; women like me are “supposed” to want a VBAC at all costs. Somehow I wasn’t so sure, but I didn’t dare admit that to my fellow mamas-to-be. Because if anything ties this community together, it’s the notion that there’s one ideal childbirth experience — and it involves as little medical intervention as possible. Inductions are frowned upon, as are pain medications. And no procedure is so vilified as the unnecessary C-section.

These parents have a point: Almost 32% of all U.S. births were C-sections in 2019, significantly more than the World Health Organization and other studies consider ideal. Women rightly argue that many medical decisions around childbirth are too driven by doctors’ convenience and fear of malpractice lawsuits and not enough by what mothers want and need. But some take that truth and wildly overcorrect for it, distrusting any kind of medical intervention in birth — and the pressure that creates doesn’t do us any favors, either.

My biggest fear was a reprise of my first go-round.

“There are a lot of good reasons to be skeptical [of doctors],” says Andrea Ford, a doula, medical anthropologist, and research fellow at the University of Edinburgh Medical School. “The natural childbirth movement is reacting to a very real problem. But when that becomes its own form of constraint and judgment, that’s not helpful.”

As I contemplated my options, I heard from dozens of gung-ho moms who felt passionately that their VBAC deliveries were healing, empowering, and downright life-changing. Many felt that they’d wrested back control from scalpel-happy surgeons to get a far superior childbirth experience.

But I couldn’t get the risks out of my head. My biggest fear was a reprise of my first go-round: After three and a half hours of (unmedicated!) pushing, my son still wouldn’t budge. Suddenly, his heart rate nosedived, and I was swept onto an operating table while my OB and nurses barked at each other over my body. Moments later, no fewer than four neonatologists charged in to revive my baby; I didn’t get to hold him for nearly an hour. Both of us ended up just fine, but I wasn’t exactly keen to repeat it — especially with a higher risk of complications this time around. The scariest one is a rare but catastrophic uterine rupture that can cause hemorrhaging and potentially death for both mother and baby. I’d also be more likely to suffer infection or surgical injury if things went south, and my baby would be more likely to end up in the NICU.

A successful VBAC would be the best outcome with the fewest risks — on this, my OB and the Earth Mama crowd agreed. Trouble was, “We can’t predict who will be successful,” says Dr. Carol Salerno, M.D., of the University of Washington Medical Center-Northwest (where, it’s worth noting, almost 40% of patients with at least one prior C-section delivered vaginally in 2019, a remarkably high rate). “The second-best option is scheduling a C-section. And unfortunately, the worst outcome is trying for a vaginal delivery and failing.”

Any mom with all-natural bona fides would go for the VBAC, I thought. But the very real chance of going through the same exhausting, terrifying childbirth experience again stuck in my mind.

The pro-VBAC faction tends to brightly cite success rates as high as 80%. But as I scrutinized research papers and reports from the American College of Obstetricians and Gynecologists, I discovered that one’s odds of a smooth VBAC vary dramatically. It’s true that many women stand an excellent chance at one. But the reason for your first C-section matters a lot, as do age and several other factors. My personal odds were more like 60%. And one of the biggest reasons to VBAC is to lower the risks to future pregnancies (C-sections increase the risk of placenta problems down the road, like placenta previa or abruption) — and my husband and I had already decided two kids were plenty.

It all left me thinking that my odds of a VBAC stood at a less-than-reassuring “eh, maybe.” Without a definitive medical reason to pick one birth plan over the other, I was left with my own murky feelings about “reclaiming my body” and having a “better birth.” Scheduling a C-section and skipping the laboring part felt like cheating somehow. Even the idea of picking a date for the surgery felt weird, as if babies should choose their own birthdays when they’re ready. Any mom with all-natural bona fides would go for the VBAC, I thought. But the very real chance of going through the same exhausting, terrifying childbirth experience again stuck in my mind.

Still, the all-natural pressure remained. The way we talked about birth in yoga class betrayed common assumptions: “If you end up with an epidural”; “overmedicalization of childbirth”; “Who’s your midwife?” At one session, a guest presenter interrupted me to talk about her own successful VBAC after emergency surgery. “So you can do it,” she said with conviction. Maybe she was just trying to be encouraging, but I went home angry that day. She has no idea what my medical history or risk factors are. Who the hell is she to tell me what I can or should do?

I’m not the only one to feel the weight of the natural childbirth crowd guiding my decisions — and guilt for not automatically choosing the party line. “There’s a machisma thing,” says Dr. Aaron Caughey, M.D., Ph.D., chair of the Department of Obstetrics and Gynecology at Oregon Health & Science University School of Medicine. “Women are almost birth-shaming each other.” A few times a month, he says he sees patients who come into the delivery room dead set against an epidural only to struggle with the pain more than they’d expected. “Creating a standard that allows you to feel like a failure — that makes me sad,” Caughey says.

All this was an easy call for my husband, who didn’t feel any of the Earth Mama pressure (there’s a reason nobody ever talks about Earth Dads). His preferred birth plan was “whatever gets me out of this with a live wife and baby,” so he leaned toward scheduling the C-section. Somewhere around 30 weeks pregnant, I realized I wanted the same. What I really, really wanted was to tell myself and the world that I’d had no other choice.

But that wasn’t true, so I started lying in yoga class. During check-ins, I faked that I was still contemplating a VBAC. These women all seemed so open and encouraging, but I feared their judgment if I confessed that I’d picked surgery, like some kind of sucker to the paternalistic birth-industrial complex.

I’ll never know what would’ve happened if I’d chosen to go for the VBAC. Maybe another harrowing surgery, maybe an empowering vaginal birth.

Around 38 weeks pregnant, I finally confessed to my classmates that I’d scheduled a repeat C-section. I came to yoga that day with all the statistics and research papers I’d collected over the past few months at the top of my mind. I still felt a little like an imposter as I said things like, “C-sections are definitely overused, but…” If anyone wanted to kick me out of the club, she didn’t say so. And it occurred to me for the first time that these other women might be struggling under the same cultural pressure I was.

Let’s keep this in perspective: The overbearing natural-birth culture pales in comparison to problems like racial disparities in maternal mortality, and it tends to affect women with the time and money for things like prenatal yoga. But it still leads women to make childbirth choices they later regret. Sometimes that’s because they end up suffering more than they need to; sometimes, because they feel like failed mothers if they don’t. No matter what, it adds a layer of unnecessary stress to an already stressful time.

I still feel like I have to justify my second C-section whenever birth stories come up. But I don’t regret the decision. My daughter chose her own birthday after all; I went into labor the day before the scheduled surgery. By the time I made it to the hospital, I was 5 centimeters dilated and in enough pain to feel like I was earning this. And the C-section that brought her into the world was surreally calm. Within a minute of hearing her first cries, I held my daughter on my chest while the team stitched me up.

In fact, if I could change anything about the whole experience, it wouldn’t be a medical procedure. I just wouldn’t have worried so much about making a “wrong” choice in someone else’s eyes. “There is no wrong choice,” Salerno says. There should only be a clear-eyed look at the options and the freedom to go with what feels best for you. I’ll never know what would’ve happened if I’d chosen to go for the VBAC. Maybe another harrowing surgery, maybe an empowering vaginal birth. But it’s hard to imagine feeling any better about my daughter’s birth story than I already do.