Allyson Felix is the most decorated Track & Field Olympian in history. A nine-time Olympic medalist. Six-time Olympic Champion. World Record Holder. She has won a mind-blowing 25 global medals at the Olympics and World Championships. With a recent event change on the track, Allyson is still honing her craft and seems to find passion and determination rivaled only by the greatest of the greats. Serena Williams. Michael Jordan. Kobe Bryant. She continues to dig deep and find new goals to motivate and drive her.

At this stage of her career, Allyson has found passions off the track, which she believes are her true calling. She loves children and serves as a member of the Right To Play board, hoping to raise awareness for underserved children in developing regions. She has hosted a wrap-up series for an Emmy-winning prime time show on NBC.

Allyson has accomplished so much, but her greatest accomplishment and her greatest love is her daughter, Camryn, who reminds her every day that she can never stop fighting for what is right in this world. 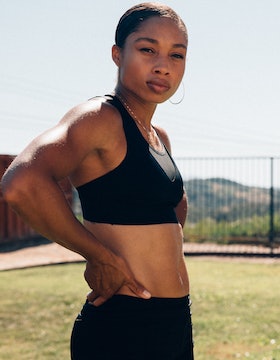 An Open Letter To Kids Struggling With Friendships, With Love From Allyson Felix

"Although I didn’t experience a pandemic when I was young, I can still relate to feeling nervous at recess or undecided on who to sit with at lunch."