Lina AbiRafeh, PhD is Executive Director of the Arab Institute for Women at the Lebanese American University, established in 1973 as the first women’s institute in the Arab region – and one of the first globally. The Institute advances women’s rights and gender equality at the intersection of academia and activism. Lina is an accomplished feminist leader with over 20 years’ international experience in women’s rights and gender equality – particularly focused on ending violence against women in humanitarian emergencies. She has worked in senior positions in complex crises such as Afghanistan, Mali, Central African Republic, Haiti, Papua New Guinea, etc. Lina is a published author and TEDx Speaker. Some of her recent presentations include Women Deliver in Vancouver, keynote address for Swedish International Development Agency annual meeting in Stockholm, and opening plenary at the International Conference on Population and Development in Nairobi. Lina completed her doctoral work from the London School of Economics and published “Gender and International Aid in Afghanistan: The Politics and Effects of Intervention” based on her research. She publishes frequently on a range of gender issues through various journals and other sources. Lina is frequently in the media, most recently profiled in The Native Society, where she shared her story as a feminist activist. Additionally, Lina is a board member of various organizations including SheDecides, Forced Migration Review, and Greenpeace MENA, amongst others. In 2018, Lina was listed as one of the Gender Equality Top 100: The Most Influential People in Global Policy - one of only two Arabs to make the list. She received this honor again in 2019 from over 9000 nominations. 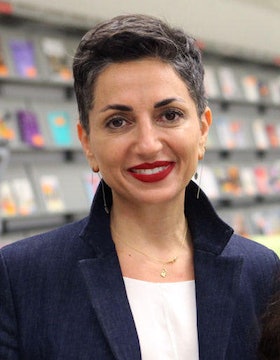 What Does It Mean To Keep Your Children Safe?

Any country can be an Afghanistan, they said.