Sikowis is is Plains Cree-Saulteaux of the George Gordon First Nation in Saskatchewan and grew up in Winnipeg, Manitoba. She is a mother of three, and the founder of Great Plains Action Society and Little Creek Camp and has aptly titled herself a Decolonizer. She has a MA in Native American Religious Studies and a graduate minor in Native American Indian Studies from the University of Iowa and has been living in Iowa City for 15 years. As a mother, Sikowis is passionate about stopping the assault to the land, the Peoples, and all living things so her children might have a better future. An active member of the Indigenous-led environmental movement since childhood, she also believes that Indigenous sovereignty and knowledge are ways to decolonize both people and the colonial-capitalist economy. She has spoken at many benefits, rallies, direct actions, interviews, and educational forums--as well as spearheaded many of these events, such as a resistance camp to the Dakota Access Pipeline (Little Creek Camp), Indigenous@SOCAP, the first Iowa Indigenous political engagement summit, the removal of white supremacist monuments in Iowa, and the concept of Truthsgiving. Beyond organizing and public speaking, Sikowis has created a following on social media through her writing, art, graphics, posts, and live streams. In Iowa and beyond, she volunteers for other organizations and works with a large network of changemakers. She enjoys working with Women’s Indigenous Media, The Possibility Alliance, Iowa CCI, Des Moines Mutual Aid, 100 Grannies, and the Bakken Pipeline Resistance Coalition, The Science and Environmental Health Network, the Urban Native Center in Sioux City, Digital Smoke Signals, MN350, Humanize My Hoodie and so many more organizations and collectives. 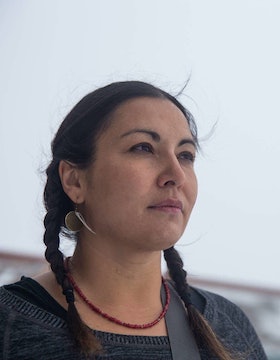