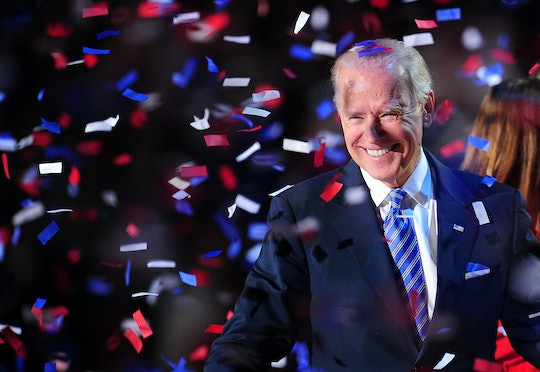 And it's nothing like what they told President Donald Trump when he used the classic rock song.

Like many politicians before him, President-elect Joe Biden infused his presidential election victory speech with music. From a popular American rock anthem to a Bruce Springsteen single featured in one of former President Barack Obama’s campaigns and a remix of a popular Steve Winwood hit, Biden’s victory celebration included more than one meaningful tune. And while some of the artists behind those songs haven’t commented directly on their use, the family of Tom Petty reacted to Biden using the late musician’s music Saturday night, saying they were “so touched” to see the famed singer-songwriter included.

“We were all so touched to see Tom included on such an important night in America,” the late musician’s family wrote in a tweet posted to Petty’s official Twitter late Saturday. “Congratulations @joebiden and @kamalaharris.”

Following Biden’s victory speech in Wilmington, Delaware, the Biden-Harris campaign played Petty’s 1989 hit “I Won’t Back Down” as both Biden and Vice President-elect Kamala Harris celebrated their win with their families on stage while confetti rained down around them.

In a tweet posted Saturday, the family of Tom Petty reacted to President-elect Joe Biden using a song from the late musician in his victory celebrations.

But the reaction Petty’s family had to Biden’s use of the song Saturday stood in stark contrast to the family's reaction to President Donald Trump playing the same song at a campaign rally earlier this year. When Trump played the song during a June rally in Tulsa, Oklahoma, Petty’s family issued Trump a cease and desist letter.

“Both the late Tom Petty and his family firmly stand against racism and discrimination of any kind,” a statement signed by Petty’s widow, ex-wife, and two daughters read. “Tom Petty would never want a song of his used for a campaign of hate. He liked to bring people together.” The four women went on to emphasize that, “Trump was in no way authorized to use this song to further a campaign that leaves too many Americans and common sense behind.”

Speaking in Delaware on Saturday, Biden pledged “to be a president who seeks not to divide but to unify, who doesn’t see red states and blue states, but sees the United States.” He encouraged people to “stop treating our opponents as our enemies” and instead see each other as Americans.

But Petty’s “I Won’t Back Down” wasn’t the only meaningful song Biden included in his victory night celebrations. The president-elect ended the night with Coldplay’s “Sky Full of Star,” a song reported to be the favorite song of Biden’s late son, Beau. Coldplay’s Chris Martin even performed the song at Beau’s funeral in 2015 following the 46-year-old’s passing from brain cancer. Playing the song Saturday may have been the Biden family’s way of keeping Beau’s memory near during such a momentous occasion.