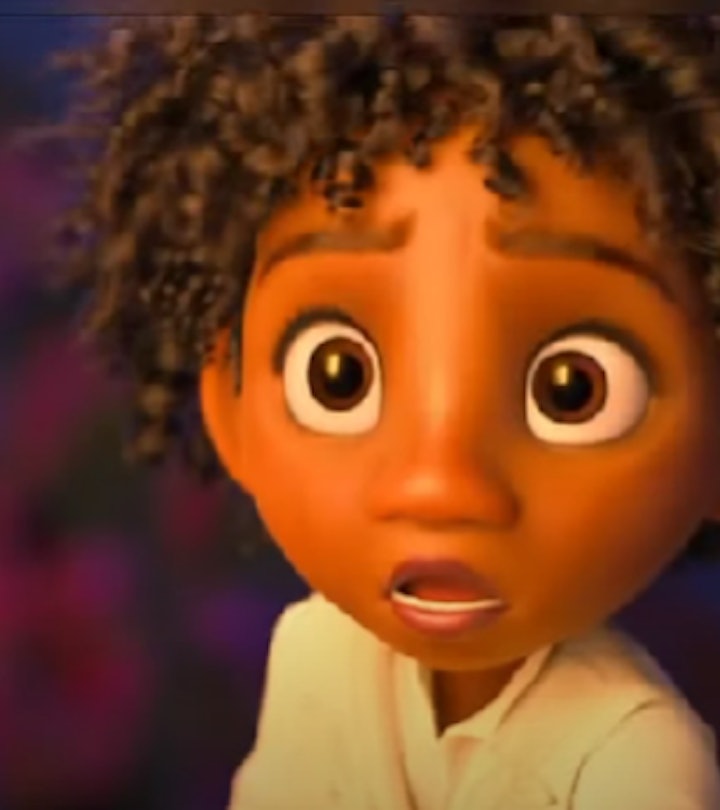 “He was just staring and smiling.”

When 2-year-old Kenzo sat down to watch Encanto with his mom, he saw something powerful. Something beautiful. Something he hadn’t seen before. When he looked at little Antonio in the Disney animated movie, he saw himself. And Kenzo’s mom Kah Brand caught the special moment when her son saw a version of himself onscreen. A moment that has since gone viral as a reminder that representation truly matters. Perhaps especially when you’re still so little, and just want to see someone who looks like you.

Brand tells Romper that Kenzo was enjoying a family movie night with his mom and dad, watching Encanto together, when her son started to react to one particular character. “I don’t think he realized how monumental this was. He was just staring and smiling.”

Antonio is the youngest member of the magical Madrigal family in Encanto, who discovers in the film that he can communicate with animals. He is a 5-year-old boy with dark skin, brown eyes, and beautiful curly black hair; just like little Kenzo. “I honestly think he may have believed he was actually seeing himself because of the resemblance between him and Antonio,” Brand tells Romper.

She snapped a photo of Kenzo smiling proudly beside Antonio on their television, and the resemblance is not just uncanny.

Kenzo’s photo was shared on social media with the hashtag #representationmatters, and even managed to catch the eye of Encanto director Jared Bush on Twitter. “Absolutely adorable! DM me! I wanna send ya something from the Madrigals!” Other people shared their own photos of moments when kids saw themselves represented in cartoons, and it was a bit of a watershed moment. To see the pride in each child’s face, shoulders back, excited. To be seen on screen is a magical thing.

And it’s something that is very important to Brand as a mom who grew up with little representation in the media.

“It instantly made my heart smile,” she tells Romper. “I can’t recall a character I could identify with growing up. As parents we’re always trying to capture ‘these moments.’ And that’s what happened here.”

Little Kenzo saw himself in Antonio, a magical boy with a pet jaguar living in a world of absolute wonder. Imagine how that makes him see himself, for just a moment.

More Like This
Watch An Exclusive Sneak Peek At 'The Amazing Maurice'
13 Is "Too Early" For Kids To Be On Social Media, Surgeon General Cautions
'Women Talking' Is A Powerful New Movie Based On A Book
Marcel The Shell Is Heading To The Oscars!
What Parents Are Talking About — Delivered Straight To Your Inbox