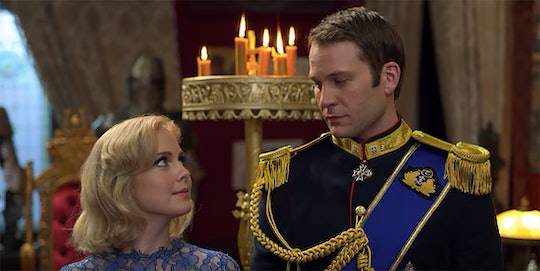 Get ready to pack your bags for Aldovia because the trailer for A Christmas Prince 3: The Royal Baby has officially arrived. And by the looks of it, the plot closely mirrors another royal couple who recently expanded their family — Prince Harry and Meghan Markle.

My first introduction to Netflix's A Christmas Prince was last Thanksgiving, when I watched the first installment. I found it to be the perfect franchise to watch over the holidays because it doesn't require much attention and there's something so cozy about viewing an indulgent Christmas movie while eating a mountain of delicious treats. On this note, you can catch up on the first two installments this Thanksgiving, as the third piece to this story is set to premiere on Dec. 5.

In the meantime, you can savor the trailer which was released on Wednesday to great fanfare. Diehard fans of this franchise are incredibly excited to see Queen Amber (Rose McIver) and King Richard's (Ben Lamb) journey to parenthood while trying to successfully run a country.

The trailer doesn't give too much away, but it does reveal some key elements to the story. Queen Amber, for example, wants the couple's baby to have "a normal life" despite their royal title. Remind you of anyone? Hmm.

King Richard isn't as keen on bucking all royal traditions, but he ultimately agrees with Amber, telling her they'll find "a new definition of normal together." Once again, I can't help but think of a certain set of parents and a little baby named Archie when rehashing this dialogue.

Amid the couple figuring out what kind of parents they hope to be, they must "must renew its ancient treaty with the fictional Asian country, Penglia," according to Vulture. But in an unfortunate turn of events, a mystery person has stolen a priceless document related to the treaty, and if they don't find it in time, the royal baby will be cursed. I'm not exactly sure what this curse entails, but I assume it isn't good.

Although Prince Harry and Meghan Markle haven't had to deal with any magical curses, they've had their fair share of drama involving the press. So this is just another example of how A Christmas Prince 3 takes cues from the famous couple, even if doesn't do so outright.

All in all, this looks like another fun installment of A Christmas Prince. And I don't believe in guilty pleasures, so please enjoy this movie freely, especially if you wish to relive the Duke and Duchess of Sussex's journey to parenthood.