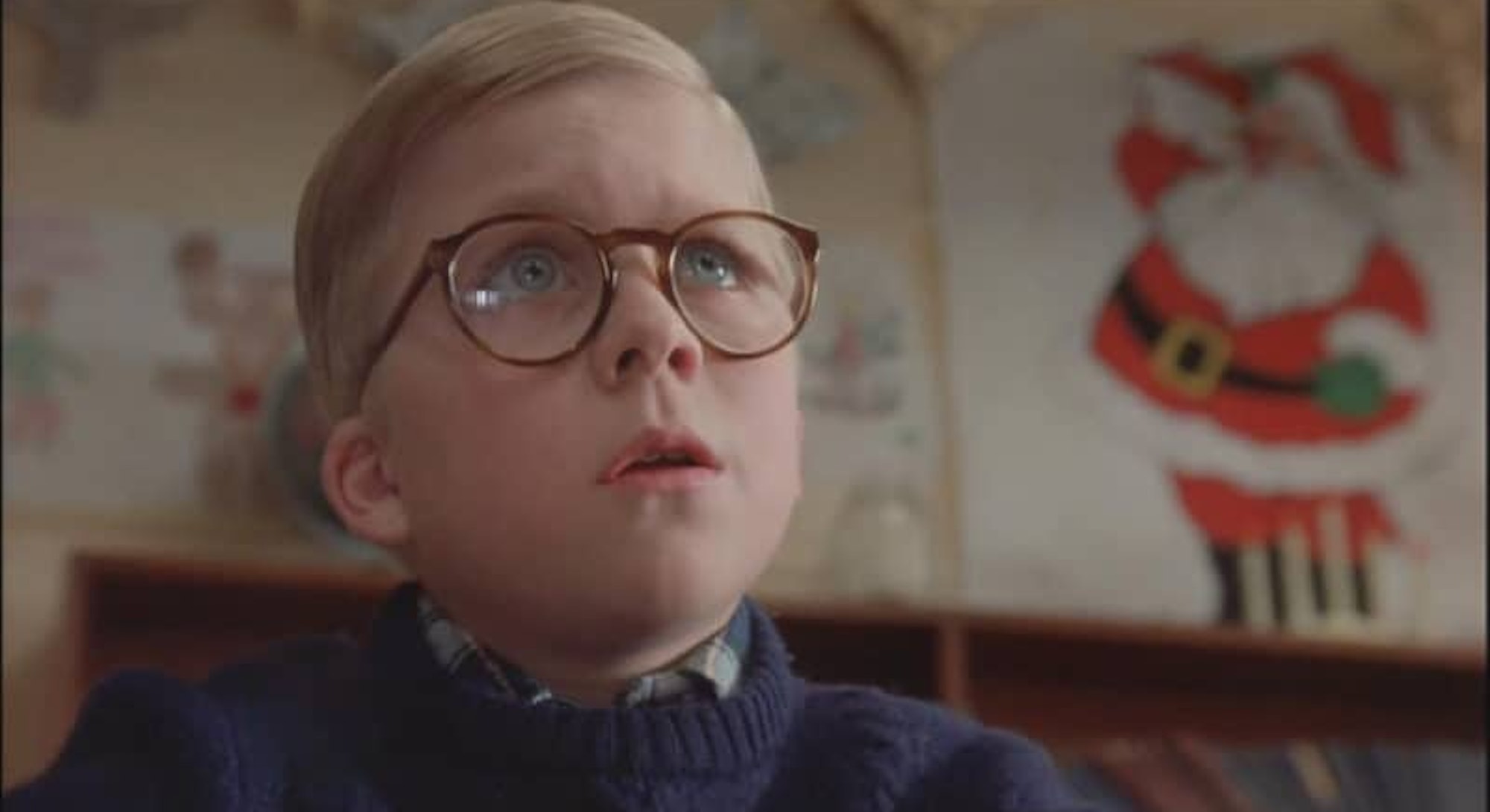 Ralphie In A Christmas Story Helped Me Understand My Own Sweet, Brooding Kid

My son and I watch it every year together.

The change happened when my son was around 5 or 6 years old. A wall of intentional mystery went up between us that everyone told me to accept. Especially when he started school. He became quieter, more himself. Less mine. Full of jokes I didn’t get or worse, staring out the window stoically from his booster seat in the van, thinking his private thoughts. We would invite his friends over for playdates and I would spy on them together. Out the kitchen window as they built a snowman or in the living room while they ate their snacks around the coffee table or yes, okay, yes even sometimes with an ear to the door while they played video games in his room. Nothing. I discovered nothing. He was more completely theirs than he had ever been mine. Quiet, brooding, remote.

And then we watched A Christmas Story together. and finally I got it. I met the little boy I was raising through Ralphie Parker.

It maybe helped that Ralphie looked a lot like my little boy. Blond hair, round red cheeks, expressive blue eyes. A slight overbite. It helped that he, too, was a big brother to not just one but three little siblings. But what really helped, what made all the difference in the world, what I am grateful for to this day, was watching him watch this movie. And seeing the parts that made him laugh, made him pay attention, or made him give me this little look like, “You see, right? You see?”

He didn’t laugh when Ralphie talked about desperately wanting that Red Ryder BB Gun with this thing which tells time. He didn’t laugh at all. Because he knew how it felt to want a thing so badly. Something out of reach for him. At that age it was an X-Box. A silly thing for a kid that age, everyone told me so and I agreed. I couldn’t afford the actual box let alone the games. Thought I would search out some child-like knock-off version that was educational, one of those LeapFrog type of systems. He knew, without us talking about it he knew. That I was going to disappoint him in a way that was totally justifiable. That if he kicked up a fuss I would have 10 easy responses to shut him down.

But I watched his joy and I thought, he has a whole other life he is trying to manage without me. The kind of big life that makes him stare out the window from his booster seat in the back of the van.

And so he didn’t laugh at Ralphie.

He did laugh when Ralphie beat the hell out of Scut Farkus. So hard and with so much glee I was a little concerned at first. I wondered, then, if he was being bullied. If he had his own Scut Farkus making his life terrible. I think he did. He never told me, not then and not now. But I watched his joy and I thought, he has a whole other life he is trying to manage without me. The kind of big life that makes him stare out the window from his booster seat in the back of the van. That makes him nap sometimes after school, or wait to eat his lunch until he gets home.

When Ralphie’s mom stops him, when she takes him home and has him wash his face. When he lays in bed waiting for his father to come home. My own boy held his breath.

I saw in Ralphie the inside of my own little boy. The daily joys and horrors and excitement and wanting, all of that wanting, that had him drop into his bed at night face first, exhausted. I saw why he dreamed so heavily that sometimes he had to wake me up to talk about his dreams. His imagination was more real to him than anything. Sitting in our kitchen eating chicken fingers and he would be staring off into space, gone from us.

But I guess what I learned was that he was gone to a place that was so good for him. Gone to a place where he was feeding himself his own version of who he was going to try to be. Where he was taking on his own Scut Farkus. Where he knew I would understand. Maybe more than he expected.

We watch A Christmas Story every year together. And all is right in our world because of it.