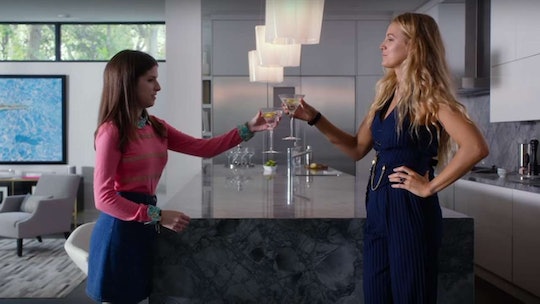 Here’s everything we know so far.

Pour some bubbly because Blake Lively and Anna Kendrick are reuniting for A Simple Favor 2, and it’s time to celebrate! The Gossip Girl star and the Pitch Perfect actress had undeniably chemistry as Emily, a mysterious upper-class woman who goes missing, and Stephanie, a YouTuber and a single mom, in 2018’s A Simple Favor. If you like day-drinking on playdates, investigating mysterious disappearances, and making friends with moms who aren’t exactly what they seem (or, at least, watching movies about it), then keep reading. Here’s what we know about this thrilling sequel.

Blake Lively and Anna Kendrick will reprise their roles.

Deadline reported on May 11 that Blake Lively and Anna Kendrick will reprise their roles as Emily and Stephanie, respectively, for A Simple Favor 2. Lively, who will be making her directorial debut with Seconds and will star in The Husband’s Secret, is real-life mom to James, 7, Inez, 5, and Betty, 2, with husband Ryan Reynolds. Kendrick, who recently starred in Netflix’s Stowaway and will star in Alice, Darling and The Dating Game, doesn’t have kids and sounds like she doesn’t have any plans to have them.

Kendrick joked with E! News, “If I have kids, it’s just another kid that your kid is going to have to fight when the water wars come. So, you know, zombie apocalypse is coming. And, with my genes, I don’t think they’d really last. I’m worried about upper body strength, coordination. These are not things that I would pass on. So, you know, they’re just going to be food.”

Paul Feig is returning to direct.

A Simple Favor 2 will be produced by Lionsgate and Amazon Studios, per Deadline, with Paul Feig returning to direct and produce with Laura Fischer. Feig is known for creating Freaks and Geeks and directing Ghostbusters, The Heat, Bridesmaids, and more. In a 2018 interview with Screen Rant, Feig talked about why he was drawn to the story of A Simple Favor.

“I had been wanting to do a Hitchcockian thriller, but it's never been a genre I felt I could write, so I just kind of had to wait until one finally came in, and when it did, I just loved it!” Feig said. “It was dark and had all these great thriller elements to it, but also had room for black comedy.”

What is A Simple Favor 2 about?

A Simple Favor is based on the novel of the same name by Darcey Bell. Stephanie is new in town, and quickly befriends cool mom Emily, whom she meets at the elementary school where their sons both go. But after a few gin martinis and incredible conversations, Emily goes missing and — like anyone obsessed with true crime podcasts — Stephanie tries to find her. But Emily isn’t exactly who she says she is, and Stephanie feels like the investigation is causing her to lose sight of reality. The movie is filled with twists and jaw-dropping moments that makes it delightfully dark.

So far, no word on what A Simple Favor 2 will be about, but Jessica Sharzer (Nerve, A Simple Favor), is returning to write the screenplay so you know it’ll be good.

When will A Simple Favor 2 come out?

More Like This
Kate Middleton Explains Why Her Kids Couldn't Attend The Top Gun: Maverick Premiere
'Hocus Pocus 2' Officially Has A Release Date To Look Forward To
Zac Efron Was Asked If He Wants Kids & His Hilarious One-Word Answer Says It All
Blake Lively Reveals Her Secret Ingredient For Being More Confident