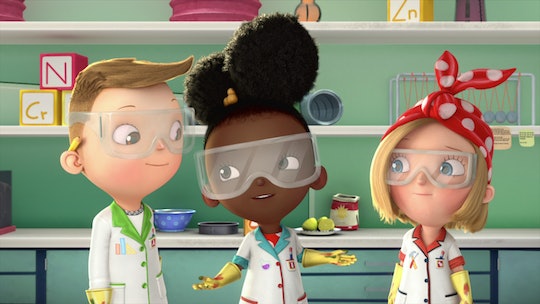 Ada Twist, Scientist, produced by the Obamas, premieres on Netflix on Sept. 28.

The Obamas have done it again. Through their production company, Higher Ground Productions, Michelle and Barack Obama have produced a brand new preschool series for kids who love science. Ada Twist, Scientist is coming to Netflix soon, and, ahead of its premiere next month, Romper can exclusively reveal the official trailer.

Ada Twist Is Based On A Children’s Book

The animated preschool series is based on the award-winning children’s books by Andrea Beaty and illustrator David Roberts. The books are about an 8-year-old Black girl named Ada who is also a scientist. According to Netflix, Ada “aspires to discover the truth about absolutely everything.” Together with her best friends, Rosie Revere and Iggy Peck, the trio goes on missions to solve scientific mysteries.

“As a fan of the books I was taken with the diverse characters, striking designs, and vital message that science matters. Plus, Ada fulfills my personal need to populate children’s television with strong girls who aren’t afraid to be the smartest kids in the room,” executive producer Chris Nee said in a statement to Netflix and Variety. Nee is also behind Disney’s Doc McStuffins, another animated Black-girl lead series, and Ridley Jones.

In the first official trailer for the series, released on Aug. 16, families get a taste of the fun and messy experiments Ada and her friends try out in their laboratory. Watch for yourself below!

Inclusivity is a huge theme for this series, starting with its main character. According to a White House report, African American children are the least likely to enter into a STEAM (science, technology, engineering, the arts, and mathematics) career. And less than 3% of Black women have a bachelor's degree in STEAM. However, over the years, movies such as Hidden Figures have increased Black interest in the fields.

And Ada Twist, Scientist is a great representation of Black girls going into the field. “To be a part of bringing a show to kids that features a young, Black girl being unapologetically the smartest kid in the room, in a world as diverse and visually stunning as the one created by the book series' author and illustrator, fills my heart to capacity,” so-executive producer Kerri Grant said in a statement.

What’s more, according to the show’s creators, each episode will end with a live-action aspect that will feature a real scientist.

It Also Features An All-Star Cast

Mark your calendars! You can start streaming Ada Twist, Scientist on Netflix on Sept. 28. While your little ones wait for the full season, they can check out a full episode on YouTube right now!