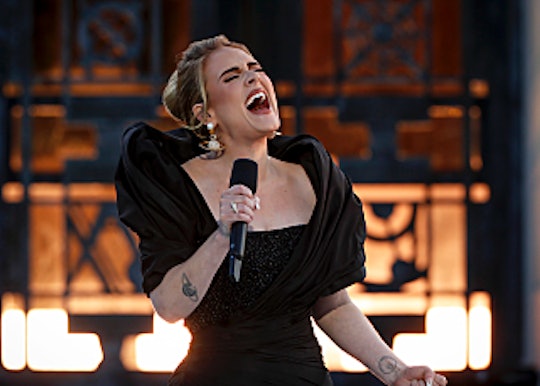 Days before the release of her new album 30, Adele performed live at LA’s Griffith Observatory for her special, One Night Only on CBS. But while the audience was filled with celebrities like Leonardo DiCaprio, Oprah, Lizzo, Gabrielle Union and Dwayne Wade, and Drake, the “Easy On Me” singer was most excited (and nervous) to perform for her son, Angelo. “This is the first time my son has ever seen me perform,” she told the audience, before declaring it was “too early to cry, and I don’t want anyone to come fix me face.” Fans don’t know much about her child, or even why Adele named her son Angelo, but what we do know hints at a relationship and parenting style based on deep love, inspiration, and respect.

Angelo — whose name, incidentally, is Italian and means “angel” or “messenger” — was born in 2012, but the world didn’t officially know his name for quite some time. Fans may have been mildly frustrated by the secrecy, but probably not surprised: Adele had kept her pregnancy a secret for seven months and was similarly tight-lipped about giving birth, not confirming that she had until Angelo was three months old.

Adele initially declined to share a name after her son was born, saying it was a "very personal" matter, but when she went shopping at Bel-Bambini in West Hollywood several months later, paparazzi caught her wearing an "Angelo" necklace. (You can see those photos here.) Even then, it wasn’t until 2014 that she actually (though inadvertently) confirmed the name via, of all things, an Instagram post from Elton John where a hand-written note signed “Adele, Simon and Angelo” was visible.

In that same year, Angelo was awarded a damage settlement after a photo agency took and published pictures of him, the BBC reported at the time. The goal, according to lawyer Jenny Afia, is to keep the child from becoming "public property."

Adele shared her reasoning behind keeping Angelo out of the spotlight in an interview with USA Today: “I don't want that for (Angelo) until he can start making his own decisions. Right now he can choose if he wants a bag of crisps or a banana, but he can't make a choice about being in the public eye. If when he's 16 he wants to be known for being my child, he can do that. But right now he's very much a minor, and we have vowed to make that decision for him.”

While Adele has very reasonably done all in her power to maintain her child’s privacy, she has shared a few tidbits about her relationship with him. In an interview with Rolling Stone, she shared that the song “Remedy” on 25 was inspired by him, and his voice is even featured on the intro and outro on another 25 track “Sweetest Devotion.”

She’s also shared that nowadays, while he’s becoming a little more aware of how famous his mama is, he’s still mostly unaware and unimpressed. “He ain’t bothered by me at all,” she told Access in October 2021. “The other day he was telling me how many YouTube followers I have is nowhere near as many as the big gamers, and I was like ‘cheers kid, thanks.’”

Adele’s latest album, 30, which comes out on Nov. 19, is dedicated to Angelo in a way, but it’s not about him. “It’s about me and I just wanted him to hear me talking madly deeply about who I am and how I feel,” she told Oprah Winfrey in a companion interview to One Night Only. “I don’t know if I’ll ever be able to have that conversation with him in real life so he can go and listen to it.”

This article was originally published on Feb. 10, 2016