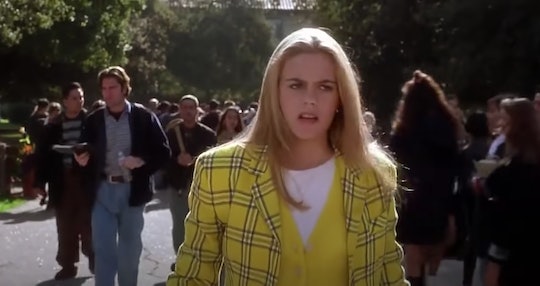 In her first very first post on TikTok, Alicia Silverstone recreated a truly iconic Clueless scene with the help of her son, Bear. And yes, of course, we are totally buggin’.

It’s been 26 years since Clueless first premiered in theaters, but some things never change. Silverstone dug into the depths of her closet to sport her iconic yellow plaid blazer, which she wore in the TikTok. The 44-year-old mom of one lip-synched to the lines of her Clueless character, Cher Horowitz, while her 10-year-old son threw his arm around his mom’s shoulder as No Doubt’s “Just A Girl” played in the background.

“Ew, get off of me,” Silverstone mouthed, playfully shoving her son to the side, out of camera. “Ugh, as if!”

But it was all in good fun. After lip synching the lines, Silverstone hugged and kissed her son, who looked delighted to be on camera with her. Not only did this show such a fun moment between the mother and son, but proves that Silverstone still has a lot of Cher Horowitz left in her.

It’s safe to say that fans are pretty excited after watching Silverstone slip on that plaid jacket again. “This girl is soooo iconic,” one commenter wrote. “Now I need to go watch Clueless for the 1,247,2838 time,” another commenter added. Same here, same here.

While Clueless and the character of Cher Horowitz stand as icons in their own right, Silverstone admitted to Vogue last year that she didn’t have love at first sight when it came to her character. “I found Cher on the page to be materialistic and unappealing,” she said. “And really annoying, to be honest. Just everything I sort of loathed. But I realized that was just me judging her, and once I started working on her I found all the heart and all the love.”

And Silverstone’s son, who she shares with ex-husband, Christopher Jarecki, happens to be a big fan of the movie, she told Entertainment Tonight last year. “He’ll bring little things [about the movie] up,” she shared. “One night we were laying in bed and he wrote Clueless Part 2 and what/where Cher would be.” Now that is the perfect idea for her second TikTok.