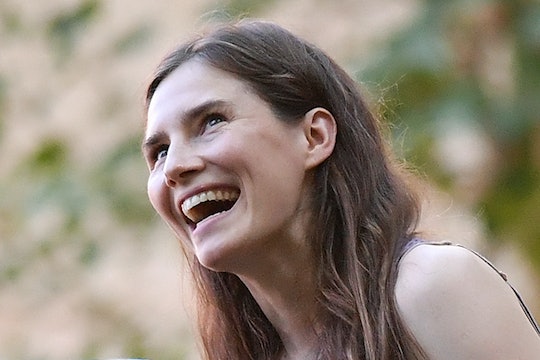 “The loneliness of realizing that I was not gonna share my life with a man I loved and I was not going to have children deeply, deeply impacted me.”

Amanda Knox is opening up about how her wrongful conviction in 2009 threatened to end her dreams of becoming a mother. In an intimate interview with the Infertile AF podcast, Knox, who experienced a miscarriage last May, revealed that although her miscarriage thrust her into a sort of existential crisis, it actually wasn’t the first time she’d found herself grappling with potential infertility and the loss of her childbearing years.

“The first time I had felt that was when I was sentenced to 26 years in prison for a crime that I didn’t commit,” Knox, who was wrongfully convicted by an Italian court of the 2007 murder of her roommate and fellow exchange student Meredith Kercher in 2009, told Infertile AF host Ali Prato. “What I lost was not just time and youth and human potential, but also there was the prospect of a family that was very, very real and lost for me in that moment.”

Knox said her prison sentence not only meant the loss of her own personal freedom but the loss of her childbearing years as well. “The moment that I was convicted and I was sentenced I was not prepared for it,” Knox said. “I went back into my prison cell and I had to completely reframe this experience that was happening to me. I had been processing this whole thing, thinking This is a temporary thing. This is not my life. I’m sort of in this limbo space that’s not really my life and I’m going to get my life back as soon as the world figures it out.”

Instead, Knox said the conviction made her quickly realize this absolutely was her life. What’s more, she realized the future she’d long imagined, where she become a mother and had a family, was not going to happen.

“I was already experiencing loneliness, and then the loneliness of realizing that I was not gonna share my life with a man I loved and I was not going to have children deeply, deeply impacted me,” Knox said. “And I tried to think, If that's not true anymore, how do I make my life worth living?”

In an essay published in November in Oprah magazine, Knox revealed she began to have suicidal thoughts as a result of this realization. “From a young age, I’d always imagined myself as a mother,” she wrote. “Now I was facing the prospect of being released back into free society at age 46. It wasn’t just my freedom that had been stolen from me; motherhood had been stolen from me... I didn’t cry. But I did imagine all the ways I might kill myself in that prison cell.”

After nearly four years in prison, Knox was acquitted and released in October 2011. She was 24. Roughly 10 years later, Knox’s dreams of motherhood have finally come true. She and her husband Christopher Robinson welcomed daughter Eureka Muse Knox-Robinson sometime before October last year (the couple has kept Eureka’s exact date of birth private, according to a New York Times profile).