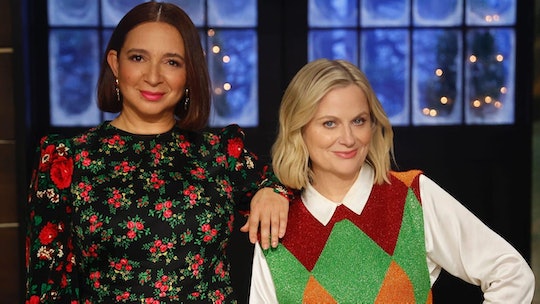 Mark your calendars for Season 2 of Baking It!

In baking, there are some combinations that are pretty much foolproof. Butter and sugar. Cinnamon and spice. Chocolate everything. Amy Poehler and Maya Rudolph. The second season of Baking It on Peacock really has nailed the perfect recipe for what we all want to watch. Rudolph and Poehler hosting the second season of the baking competition series and there’s even a special holiday episode on the docket.

Rudolph hosted the first season of Baking It, a competition series where bakers are only vying to impress one group of judges — grandmothers. An entire jury of them who are ready to say yay or nay to whatever the bakers can concoct. Rudolph hosted Season 1 alongside fellow Saturday Night Live Andy Samberg, but for Season 2 she will be joined by her longtime collaborator and friend, Amy Poehler. The two have worked together in movies like Wine Country and Sisters, along with Tina Fey of course, and their chemistry is definitely going to be exactly the perfect addition to the already charming recipe that is Baking It. And it sounds as though they have their work cut out for them.

“This year's challenges will be filled with explosions, implements of destruction, smashing cakes and more,” Peacock announced on Oct. 25. “The second season of Baking It marks the first time the Emmy-winners have hosted a series together.”

Rudolph and Poehler released a joint statement sharing their excitement about hosting their first series together as well, per E!, and their minds were squarely set on all that delicious butter, “This season's coziest cooking competition is Baking It: Season 2! This season has everything: The Grannies, crafty bakes, goofy songs about butter, cash prizes, BFFs, family, and did we mention butter?”

Poehler is no stranger to the competition series, of course. Baking It was created by the same people who made her crafting series with her Parks and Rec co-star Nick Offerman, Making It. So she’s bound to be a pro as ever.

The second season of Baking It drops on Peacock on Dec. 12, just in time for the holidays when baking is on everyone’s minds. And speaking of the holidays, Baking It will also have a holiday special airing on Dec. 12 on NBC where Poehler and Rudolph invite their famous friends to compete in their own baking competition to raise money for their favorite charities.

Imagine a day of baking along with Maya Rudolph and Amy Poehler and the judgmental grannies in the weeks before Christmas. Dreams do come true.