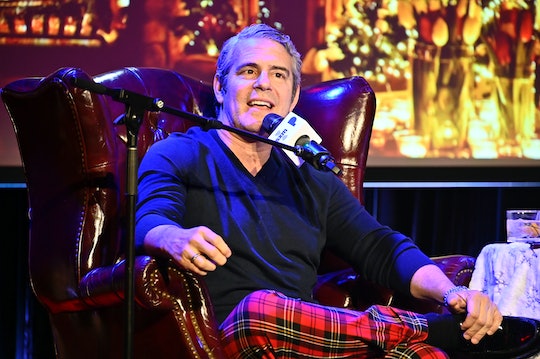 “The first day was really rough and he was really upset,” Cohen said of having to quarantine away from his 2-year-old son for 10 days.

Andy Cohen is grateful to be feeling like his old self again after recently battling a breakthrough case of Covid-19. And although the Bravo host’s case didn’t turn into an incredibly severe illness, Cohen has said there were some difficult aspects of contracting the virus as a single dad. In a recent episode of his SiriusXM radio show, Cohen admitted it was “really upsetting” having to quarantine away from his 2-year-old son Benjamin — for him and for Benjamin.

“I quarantined in the house,” People reported Cohen said on an episode of Andy Cohen Live! that aired earlier this week on SiriusXM radio. “The first day was really rough and [Benjamin] was really upset and he wanted to hug me so badly.”

Cohen, who welcomed Benjamin via a surrogate in February 2019, said his toddler just couldn’t understand why he was suddenly unable to even get close to his dad, let alone enjoy a hug or a snuggle. “We tried cohabitating and he was not getting the message that he could not come near me and it was serious,” Cohen said. “It was really upsetting.”

To help ease some of the emotional distress, Cohen decided it might be better if he quarantined completely separately from Benjamin. “He wound up going out to Long Island with his nanny,” the reality TV star and talk show host explained. “We quite literally separated. It was not pretty. It was not pretty.”

In fact, Cohen called being separated from his son “the very worst part” of having Covid-19, E Online reported.

Cohen said he first began feeling ill earlier this month, shortly after getting his Covid-19 vaccine booster. While he initially dismissed the symptoms as side effects of his booster shot, Cohen said he soon realized he was having a bigger “reaction” than should be normal and began to suspect he’d contracted Covid. “I had gotten a booster that Thursday, and so then I thought I was sick from the booster — that I was having a reaction to the booster,” Cohen said. “And then two days later I was like, ‘Wait a minute, this is quite a big reaction.’ And I got pretty sick. But I'm all better now.”

But this isn’t the first time Cohen has fallen ill with Covid-19. According to CNN, Cohen first contracted the virus in late March 2020. At the time, Cohen reported experiencing symptoms that included a fever, cough, tightness in the chest, chills, loss of smell and appetite, and body aches, the cable news outlet reported.

Earlier this week, the Bravo host said he was quarantined for 10 days in total but woke up Monday with a negative PCR test feeling “all better.”