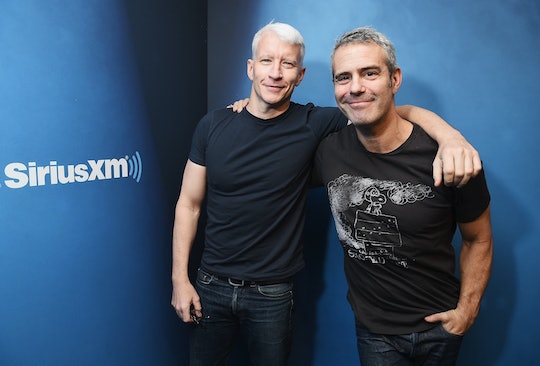 Andy Cohen is going through it right now.

Anderson Cooper needs to reveal his secret to parenting toddlers. He apparently can’t think of a single “wrinkle” in the behavior of his 2-year-old son Wyatt or his 6-month-old son Sebastian, whom he shares with Benjamin Maisani, and parents everywhere are amazed — including fellow dad of two Andy Cohen. The Watch What Happens Live! star recently went on a walk with Cooper, but when he tried to vent about challenging toddler behavior, it went hilariously wrong as the Anderson Cooper 360° star just couldn’t relate.

“I DON’T feel heard!” Cohen, who is dad to Ben, 3, and Lucy, 4 months, wrote on Instagram today, alongside a video of him and Cooper. In it, Cohen is pushing a stroller and Cooper is walking next to him with Wyatt sitting on his shoulders.

“So, Anderson,” Cohen says in the video. “Yes,” he responds.

“I’m dealing with major mood swings and irrational temper tantrums,” Cohen says, as Ben is repeating “Wyatt” over and over. “What are you dealing with these days?”

“I don’t know,” Cooper says, as Wyatt is adorably sitting on his shoulders. “My kids are pretty great,” he adds.

At this, Cohen has a look of shock on his face. “What? Like there’s gotta be some wrinkle right now,” he presses, because c’mon — no parenting is completely smooth sailing, right? Right?!!

“Wyatt, what’s the wrinkle? Is there a wrinkle?” Cooper looks up and asks his son, who is playing with a pair of pink sunglasses.

“Is there a wrinkle, Wyatt?” Cohen asks, with silence as a response. “No,” he continues. “Oh that’s nice. Great. So everything’s peachy at your house?”

“Yeah, it is,” Cooper responds with a laugh.

“Oh good. And you had a great vacation,” Cohen says.

Luckily, parents came through for Cohen, as so many people could relate. “You are NOT alone! Bc this 3 yo of mine…wheeeew Chile. Anderson’s time will come 🤣,” one person commented.

“You’re not alone Andy, we’ve all been there 😂😂❤️ this too shall pass…” said another.

“😂 I hear you!! Parenthood no joke!!” someone else wrote.

When Wyatt turned 2 in April, Cooper posted photos of him on Instagram and gave a little insight into the toddler’s personality. “He is sweet and funny, kind and caring,” Cooper wrote. “Your Papa and brother and I love you sooooo much!”

Don’t worry, Cohen. Cooper just hasn’t entered the fun “threenager” stage, yet. Pretty soon, he’ll be able to vent about his kids with the best of ‘em! And if he doesn’t, well, there’s tons of other parents who understand the struggle. You are not alone!