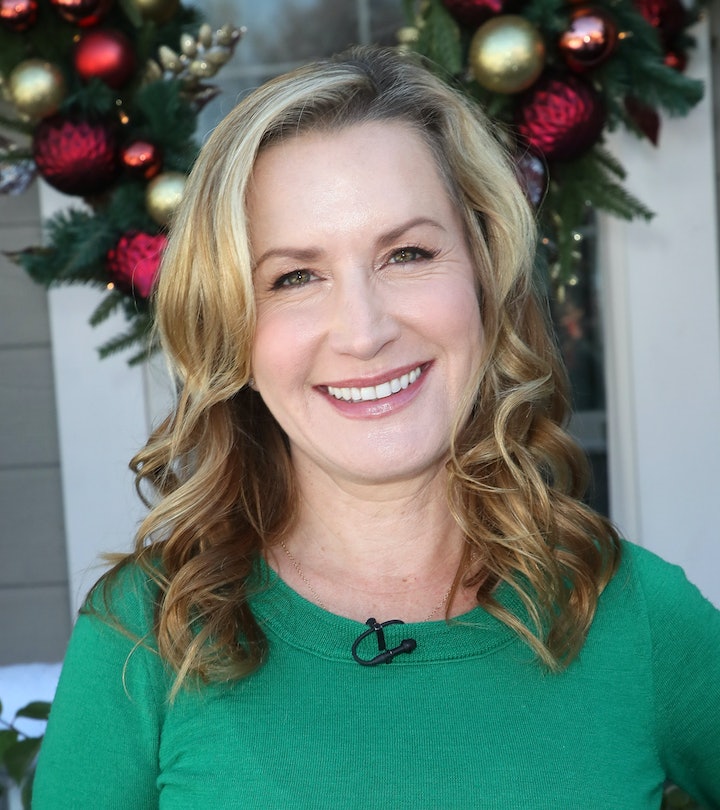 Planes, Trains and Automobiles is on her family's watchlist this year.

This past summer, Angela Kinsey introduced her kids to The Office. In a video posted on the actress’ Instagram account, she’s cuddled up under a blanket with daughter Isabel, 12 and stepsons Cade, 12 and Jack, 10, who are giggling wildly as Ed Helm’s Andy Bernard punches a hole in the wall. Truly a classic. This holiday season, she’ll be introducing them to some of her favorite Christmas classics. “They have never seen Planes, Trains and Automobiles and I told them that this year it's happening,” she tells Romper. “And of course, I love Christmas Vacation. I used to watch that with my dad.” Of course, there’s plenty of time to make sure they see them all this year — the usual parade of parties, unfortunately, won’t go on as usual.

Angela Martin's character was infamously Dunder Mifflin’s joyless Head of the Party Planning Committee (not to be confused with The Committee to Plan Parties) and, in real life, Kinsey also likes to play hostess, which is going to make this holiday season, amid COVID-19, just a little bit harder. "I'll miss the parties," she says. "For years, I hosted a rowdy fun Yankee Swap gift exchange and now I host a smaller gathering of friends. We do a dessert and drinks theme. My husband is a fantastic baker, so our dessert table is legit!”

You might attribute this love of playing hostess to an innate Southern hospitality; Kinsey was born in Louisiana, though she spent most of her childhood in Jakarta (fun fact #1: she still speaks Indonesian) before her family settled in a tiny town in northern Texas. She worked in the entertainment industry for over a decade before landing The Office in 2005 (fun fact #2: she originally auditioned for Pam but her performance was deemed “too feisty”). In 2008, she gave birth to her daughter, Isabel, her only child with ex-husband Warren Lieberstein (fun fact #3: brother of Paul Lieberstein aka, Toby from HR). The two separated in 2009 but remain friends. In a 2013 interview with HuffPost, Kinsey said, “Our daughter is growing up seeing two people who care about each other. We may not be a traditional family on paper but we are a family and I tell her that families come in all shapes and sizes.”

In 2016, she married longtime boyfriend actor Joshua Snyder, who had two sons of his own. Navigating the intricacies of a blended family can be challenging, particularly during the holidays (or a pandemic) but she tells Romper that the secret to her success is compassion and flexibility. “And always put your child first,” she adds.

Since The Office, she’s kept busy with an impressive roster of television roles. Fans can also find her online on Baking With Josh and Ange, in which her husband bakes while she “chats while trying her best to keep up” and Office Ladies, a nostalgic podcast about the show which she hosts with friend and former castmate Jenna Fischer. (She revealed in an interview with Hello Giggles that “with kids Zooming for school and pets around” that the best spot in the house for podcasting is her husband’s closet.)

Though she isn’t planning any major gatherings this year, she is still looking forward to a cozy Christmas with her family. “There will be lots of board games, baking, crafting, and getting cozy and watching movies,” she says. Kinsey is pretty good at making the most out of a less than ideal situation. Like that time someone gave her a porcelain doll that pops out of a fabric box for Christmas. “It’s slightly terrifying,” she admits. “But I kept it! It’s tucked away in a little china hutch.” She’s also spending the holidays partnered with the newly-launched The Ice Cream Exchange, which is running a special holiday offer starting on Dec. 8: you tell them about your underwhelming (or slightly scary) holiday gift and they’ll give you a chance to win free or discounted ice cream on demand. “It makes things a little sweeter,” Kinsey quips.

What gift is she hoping for this year? “This is probably going to sound lame,” she says. “But I love it when I get cozy pajamas. Loungewear is my jam!” Hiding in closets from noisy kids? Hanging out in pajamas? Trying to make the best out of a very bizarre holiday? We feel so seen.