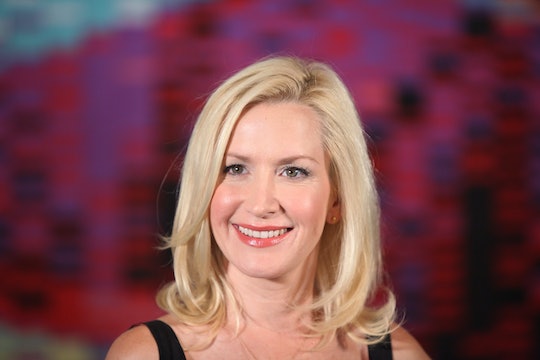 Do you remember when Angela Martin and Andy Bernard were engaged on The Office? (Of course you do.) There was this big turmoil because Angela clearly still had feelings for Dwight Schrute but Andy was so nice, so who do you even root for? Well, Angela Kinsey recently watched The Office with her kids and it seems like they picked a favorite. They looked to be Team Andy judging from their laughter when he punched a hole in the wall in that iconic Season 3 episode.

Kinsey is mom to 12-year-old daughter Isabelle with ex-husband Warren Lieberstein, who was a writer on The Office. She is also a stepmom to two boys, 12-year-old Cade and 10-year-old Jack, since marrying Days Of Our Lives actor Joshua Snyder earlier this year. This week, Kinsey shared a video of herself curled up in bed spending some time with her three kids watching a very memorable scene from The Office featuring Ed Helms as Andy Bernard punching a hole in the wall.

Let me take you back to the scene: Andy has just attempted to make Michael Scott (Steve Carell) his new best friend and was shot down pretty publicly. Then Jim Halpert (John Krasinski) calls Andy's phone that he has hidden so Andy hears the "Rockin' Robin" ringtone endlessly, but isn't able to find it. At which point he screams and punches a hole in the wall and Kinsey's kids laugh and laugh.

Kinsey shared the video on Instagram with the caption, "Some evenings you just want to pile into bed and watch Andy Bernard punch a hole in the wall."

Social media users who are presumably also fans of The Office took to Kinsey's video to share their joy that her kids watch the show, writing, "So cool you watch with your kids!" and "Okay. This is adorable."

Of course, Kinsey continues to be a fan of the show herself. She and Jenna Fischer, who played receptionist Pam Beesly on The Office, started a podcast on 2019 called The Office Ladies where they sit down to discuss behind-the-scenes details about episodes from all nine seasons of the show.

As a cast member, Kinsey knows how everything turns out, of course. She knows Andy Bernard eventually becomes the manager of the Scranton, Pennsylvania office of Dunder Mifflin Paper Company. She knows her character marries Dwight Schrute on his beet farm. But the beauty of watching with the beloved series with her kids means she can go back to the beginning and watch with fresh eyes. And that's just fun for everyone.

More Like This
The Best Family Movies & Shows Coming To Netflix October 2022
Exclusive: Three Siblings With Super Powers Protect National Parks In Spirit Rangers
'Workin’ Moms' Season 7 Is Reportedly In The Works! Here’s Everything We Know
George Clooney Really Regrets Having His Twins Learn A Language He Doesn't Speak