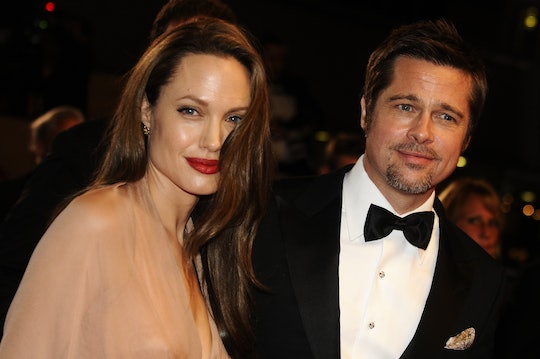 The actor was awarded joint physical and legal custody.

Angelina Jolie and Brad Pitt have been struggling with a difficult custody battle over their six children since their separation in 2016. While Jolie has fought for sole custody, several media outlets reported that a recent court ruling awarded Pitt joint physical and legal custody of their minor children in the spring. Their oldest son, Pax, is 19 years old.

The Maleficent actress previously asked that Judge John Ouderkirk, who had been hired to oversee the custody case, be disqualified from the proceedings when he would not allow their children to testify, the Associated Press reported. The lengthy court battle has, however, reportedly seen testimony from child services professionals who interviewed the children, as well as others who know the family. Jolie is expected to continue her legal fight to keep sole custody of the children after this significant change to the agreement, according to Page Six.

While the couple has not spoken publicly about the ruling, the Jolie-Pitt children fortunately appear to be thriving, thoughtful, conscientious people who are helping their mom deal with adversity. "I'm managing through it because the children are quite resilient, and they're helping me, but I'm not good at it at all," Jolie told British Vogue, "I love them. I feel like we're such a team. It may sound clichéd, but you love and you try, and even if you burn the eggs, that doesn't matter in the end."

So who are the Jolie-Pitt children?

Jolie adopted 19-year-old son Maddox in Cambodia in 2002. In June 2020, she described what it was like meeting her son for the first time in an interview with Vogue India. “I met baby Mad at an orphanage. I can’t explain it and am not one to believe in messages or superstition,” she told the magazine. “But it was just real and clear." At the time she was newly dating Pitt, who would later go on to adopt Maddox as well. While the father and son are reportedly estranged, Maddox and his mom remain close.

Over the years, Maddox has grown into a man who makes her proud. “I could not be prouder of my sons for the men they are becoming,” Jolie wrote in an essay for Elle. “The way they respect their sisters and are respected by them.”

In 2007, Jolie and Pitt added son Pax to their family via adoption from Vietnam, Reuters reported at the time. Now Pax is a 17-year-old who has been his mom’s date to the 2018 Golden Globe Awards, where she was seen helping him fix his suit and wearing a proud smile the whole night.

Jolie adopted daughter Zahara in 2005 from Ethiopia, and the 16-year-old has joined her mom in the red carpet several times. She is even reportedly a talented jewelry designer, according to Elle.

When asked in 2017 what makes her happy, the answer was easy, “The sound of Zahara's laugh," Jolie told Hello! magazine. "She is one of those people who laughs with her whole body. Completely open and full of joy."

Jolie and Pitt welcomed daughter Shiloh in 2006, and ever since she was a toddler the 14-year-old has been a trendsetter in ties and pant suits. While there were some who criticized the style of a small child, Jolie told Reuters, “I think she (Shiloh) is fascinating, the choices she is making. And I would never be the kind of parent to force somebody to be something they are not. I think that is just bad parenting.”

In 2008, Jolie gave birth to twins, son Knox and daughter Vivienne. Once she became a mom of six, her reality changed. “The great thing about having a bunch of kids is that they just remind you that you're the person who takes them to go poop," Jolie told Total Film magazine in 2013. "That's who you are!"

Jolie’s youngest daughter’s name is Vivienne Marcheline, named after Jolie’s mother Marcheline Bertrand who died of ovarian cancer the year before she was born.

In her 2019 essay for Elle, Jolie offered a little insight into the women she was raising. “I often tell my daughters that the most important thing they can do is to develop their minds. You can always put on a pretty dress, but it doesn't matter what you wear on the outside if your mind isn't strong. There is nothing more attractive — you might even say enchanting — than a woman with an independent will and her own opinions."

If her kids need a role model for an independent woman, they certainly don’t need to look far.

This article was originally published on May 8, 2021