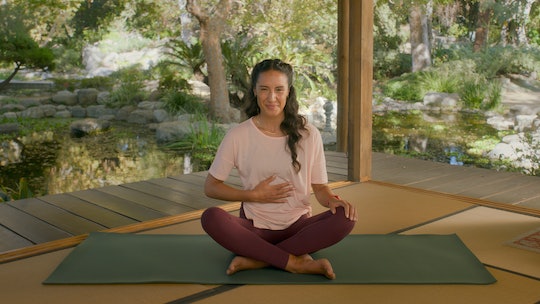 Psst Parents! You Can Take A Free, Virtual Mindfulness Class With Your Kids This Week

Between a global public health pandemic, lockdown orders, and nationwide school closures, the past year has brought a lot of uncertainty into kids' lives. And while many parents may wish they could instantly remove the disruption, anxiety, and fear their children have encountered, such things are, unfortunately, easier said than done. But a new, and completely free, virtual mindfulness class for kids from Apple TV+ may help children build resilience using various different techniques geared at cultivating calm and balance amid uncertainty.

On Jan. 28, Apple TV+ will release Stillwater: Mind, Music & Movement, a special mindfulness class on YouTube Kids designed specifically for children, parents, or caregivers who may be seeking ways to infuse their life with a little more zen. A spokesperson for Apple TV+ tells Romper the class will be broken down into three segments or "chapters."

In the first, titled "Mind," children will learn to notice and become aware of their surroundings. It will feature an introduction to mindfulness from Mallika Chopra, the author of multiple children's books centered around emotional awareness, self-reflection, and feeling emotions in your body. Chopra is also the daughter of doctor and wellness guru Deepak Chopra and serves as a mindfulness consultant for the Apple TV+ series Stillwater.

In the second segment of the class, titled "Music," recording artist Kishi Bashi and composer Toby Chu will lead kids through an interactive music session. Using materials easily found around the home (such as a pot or bowl and a wooden spoon) children can drum, tap, or clap along as Bashi and Chu communicate various different feelings through music. The exercise is meant to serve as a fun way of helping children identify and talk about their emotions.

The final segment of the class, titled "Movement," will see Apple Fitness+ yoga instructor Jessica Skye will lead children through a series of easy (and most importantly, kid-friendly) breathing and movement exercises. Each exercise is geared at introducing calm to the body and mind and can be done any time, anywhere. You can view a special clip from this section of the class above.

You can watch Apple TV's Stillwater: Mind, Music & Movement class on YouTube for free beginning Jan. 28. The class will also be available to watch as bonus content on Apple TV+. And if your children enjoyed the moment of zen cultivated in the class, be sure to check out Stillwater, the Apple TV+ series that debuted last year with an emphasis on cultivating emotional awareness in children.

The animated series is based on the Scholastic book series titled Zen Shorts and boasts both beautiful art and wonderful storytelling. It begins with a wise panda named Stillwater who moves in next door to siblings Karl, Addy, and Michael. Through Stillwater's first six episodes, the children get to know their new neighbor and learn new ways of thinking about themselves, the world, and their place within it. You'll find the first season of Stillwater exclusively on Apple TV+.