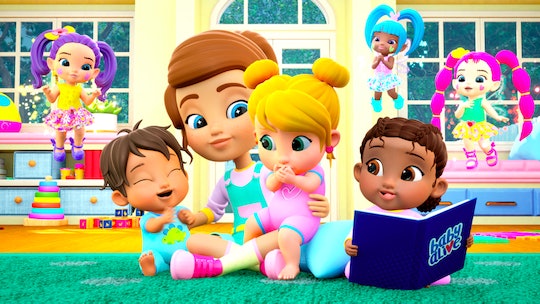 Mark your calendars for July 9!

If you grew up in the ‘90s, chances are you either played with a Baby Alive doll or had a friend with one. The dolls that let you pretend feed and diaper a little baby — just really put in a full day of imaginary parenting. Well now, Romper can exclusively reveal Baby Alive dolls are getting a YouTube series about a young girl named Charlie.

Hasbro will launch Baby Alive Show, its new Baby Alive YouTube series, on July 9. The 20-episode series, which was developed with eOne, will feature a “rich, nurturing play pattern at the core of Baby Alive, along with the imaginative storytelling of Glo Pixies, in one amazing playroom,” Hasbro explains. The playroom in question belongs to Charlie, who spends her time caring for her Baby Alive dolls with the magical help of Glo Pixies.

“One of Baby Alive’s goals is to deliver realistic baby moments in a way that allow children to care for their doll like a ‘real parent’ would,” Dean Carley, SVP of Global Brands at Hasbro, tells Romper. “By bringing the Glo Pixies characters to life through a YouTube digital series, it further deepens the connection between the kids and dolls. In the new Baby Alive series, the dolls have their own names, personalities, quirky characteristics, and storylines that reflect children’s daily routines and playtime.”

Along with the release of the new YouTube series, Hasbro is also launching two new dolls. The Baby Alive Glo Pixies as well as the Baby Alive Lulu Achoo, who sneezes and even moves her hands up towards her face to keep the germs from her imaginary sneeze from spreading. Her forehead also lights up when you take her temperature with the play thermometer and she giggles and waves her arms when she starts to feel better.

Baby Alive dolls have stood the test of time with kids simply because they are fun and sweet and satisfy a deeply resonant need for little ones to take care of something. Something smaller than them, more helpless. And this new Baby Alive YouTube series will surely be a hit, because it gives the satisfaction of pretend caring for the dolls without any of the work. Genius.

Baby Alive Show premieres on YouTube on July 9 with three episodes, which are each around five minutes long. After that, new episodes will be released weekly.