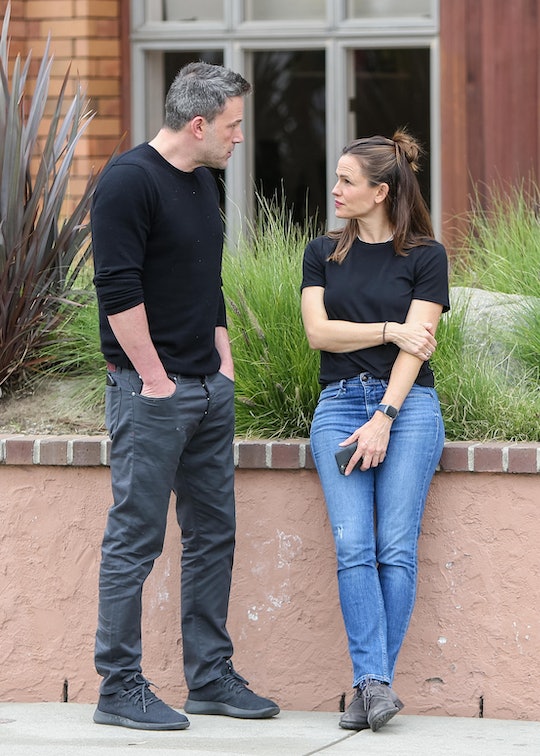 “I would never want my kids to think that I would ever say a bad word about their mom.”

After sparking fierce outrage on social media, Ben Affleck spoke to Jimmy Kimmel on Wednesday night to clarify earlier comments he had made about ex-wife Jennifer Garner, specifically about their marriage and his alcohol addiction.

Earlier this week, the dad of three sat down for an interview on The Howard Stern Show where he discussed his relationship with Garner, who he was married to from 2005 until their divorced was finalized in 2018, and how he felt that affected his alcoholism. “I'd probably still be drinking. It's part of why I started drinking … because I was trapped,” referring to his marriage to Garner, per CNN. “I was like 'I can't leave 'cause of my kids, but I'm not happy, what do I do?' What I did was drink a bottle of scotch and fall asleep on the couch, which turned out not to be the solution.”

On Wednesday, Affleck attempted to clear up any possible misconception about his comments, telling Kimmel that his words had been taken out of context. “They had, literally, taken the conversation I had for two hours and made it seem as if I was saying the exact opposite of what I said,” Affleck told Kimmel. “I had gone on and said, like, how much we respect each other and cared about each other and cared about our kids and put them first and went through our stuff. And they said I had blamed my ex wife for my alcoholism and that I was 'trapped' and just made me out to be the worst, most insensitive, stupid awful guy.”

The Tender Bar star went on to explain that he had to clear things for his three kids he shares with Garner, 16-year-old Violet, 12-year-old Seraphina, and 9-year-old Samuel. “That’s not true. I don’t believe that. It’s the exact opposite of who I am and what I believe,” he said of the negative remarks made about him on social media. “I would never want my kids to think that I would ever say a bad word about their mom.”

“This really upset you,” Kimmel chimed in.

Ben Affleck cleared up comments he made about Jennifer Garner.

Affleck’s comments on The Howard Stern Show received intense backlash on social media from people who felt he was trying to place blame on Garner for his alcoholism, especially since his struggles with alcoholism pre-date his marriage, beginning back in the ‘90s after his parents’ divorce, according to Entertainment Tonight. One Twitter user shared a photo of the couple in a car, Garner driving and Affleck asleep in the back, with the message, “Ben Affleck: I would've 'still' been drinking if I stayed married to Jennifer Garner. Jennifer Garner: *helps him to rehab 3 full years after they’ve already separated.”

Stella Parton, country singer and sister of Dolly Parton, wrote on Twitter, “Is it me or is Ben Affleck a total Cad or what? After all his struggles, his ex wife Jennifer Garner, the mother of his three children, supported him for years through it then he gets on Howard Stern’s show and blames her for his drinking. Excuse me! Grow The F up Ben,”

Another Twitter user wrote, “Jennifer Garner is a gift to this world and Ben Affleck never deserved her.”

As for Jennifer Garner, she seemed blissfully untroubled by the drama that’s unfolded over the past few days. She’s been sharing fun videos on Instagram and avoiding comment about Affleck’s interview. She has, however, addressed her role in Affleck’s struggles in the past. After her ex-husband got a rising phoenix tattoo in 2016, Garner told Vanity Fair, “You know what we would say in my hometown about that? ‘Bless his heart.’ A phoenix rising from the ashes. Am I the ashes in this scenario? I take umbrage. I refuse to be the ashes.”

More Like This
Jennifer Lopez Took Emme & Ben Affleck’s Daughter Violet To See Into The Woods
12 Of Jack Black’s Best Parenting Quotes
Adrienne Bailon & Israel Houghton Welcome A Baby Boy Via Surrogate
Princess Charlotte Had A "Lovely" 7th Birthday, According To Her Parents