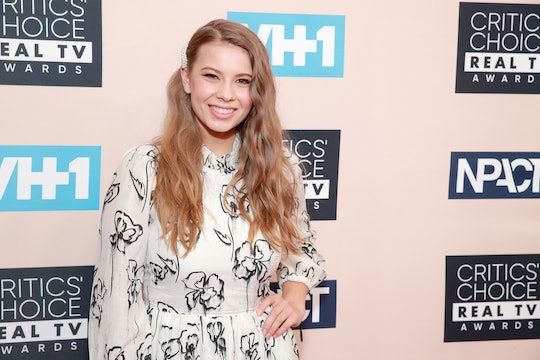 Your arms will hurt just watching it.

Don’t let her tiny size and precious pink outfits fool you. One-year-old Grace Warrior is Queen of the Australia Zoo — who requires respect from her loyal subjects (aka, her mom, Bindi Irwin and her dad, Chandler Powell). On a recent hike with her family, Grace went into full queen mode after falling asleep in her stroller, and the video is bursting with cuteness.

Irwin posted a clip of the funny moment on Instagram, which was filmed by her younger brother, Robert Irwin. “Our boardwalk stroll got a little narrow right as Grace started falling asleep in the pram,” the Crikey! It’s the Irwins star wrote.

The little girl decided the middle of the hike was the perfect time for a nap (because, obviously), and dozed off in her stroller. Normally, this would be no big deal — they likely brought the stroller just for this reason. Unfortunately, their path happened to narrow to a tiny strip right at that moment, meaning Irwin and Powell had to hoist the whole stroller up for the journey across. They could have woken up Grace and folded up the stroller...but that would require waking up a sleeping baby. And, yeah, that’s definitely not an option. Grace may not have had a palm leaf fan or grapes straight from the vine, but the hand-carried ride was definitely fit for a royal.

Watch this video with the sound all the way up, as Irwin hints “Robert’s commentary😂” shouldn’t be missed.

“Wow Grace, why don’t I get that?” Robert says, while zooming into Grace being carried in her stroller. Powell is in front, leading the way through the path, while Irwin lifts the stroller from the rear. “She’s so relaxed!” Irwin says.

Next, Robert confronts his mom, Terri Irwin, about the lack of royal treatment in his own life. “How come you never carry me around in a pram?” he asks. Terri cheekily responds, “I carried you around — for most of your life.”

Later, Robert asks for “a turn riding in it,” to which Powell and Irwin smile and say, “Yeah.”

Fans were loving this hilarious video, relating to the challenges of parenthood. “This things we do as parents, 😂” one person commented. “The things we do to keep babies asleep lol,” wrote some else.

Others were commenting on Terri’s response to her 18-year-old son. “Terri was like SIR I CARRIED YOU ENOUGH IM DONE😂😂” wrote one person. Another said, “Terri's burn 🔥🔥🔥 absolute gold. 😂😂😂”

This extreme stroller carry, which will make your arms hurt just from watching it, is just one way Grace is treated like the queen she is. From holding umbrellas in the rain to hand-feeding snacks to Grace — and introducing her to exotic animals! — Irwin and Powell spoil their daughter in the best way. And who can blame them? She is adorable!

More Like This
Patrick Mahomes & Brittany Matthews Reveal They're Expecting A Baby Boy In Sweet Video
Nick Jonas Shared A Rare Photo With His Daughter Malti In The Cutest Matching Shoes
Catherine Reitman Calls It Like She Sees It: “Being A Working Mother Is Impossible”
Ginger Zee Had A Perfect Response After A Troll Asked Her "Who's Raising Your Kids?"