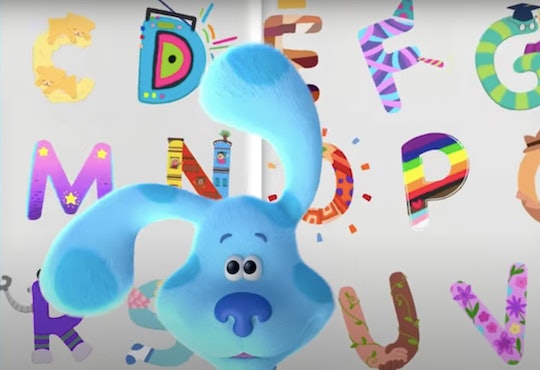 A new song from everyone's favorite Nick Jr. puppy is being praised for its inclusivity with imagery and thoughtful lyrics. Indeed, Blue's Clues & You released a new ABC song celebrating LGTBQ+ on its YouTube channel this week and, what's more, it's a seriously catchy tune, too.

The sweet little dog Blue, who is voiced by Traci Paige Johnson, sings us a new version of the alphabet song assigning ideas and thoughts to each letter rather than an object. For instance, instead of "A is for apple," Blue sings "A is for amazing, B is so brave, C is so comforting, and D likes to dance all day, E is for everyone."

Blue sings, "I love every letter, and I love everyone" as part of the chorus, eventually moving to the letter P. In Blue's version of the song, "P is full of Pride." Just in case anyone wasn't clear on whether or not that pride was a shout out to the LGBTQ+ community, the letter P is rainbow colored with a heart surrounded by flags that represent trans, asexual, pansexual, intersex, gender-fluid, and more communities. Everyone is included. Because Blue loves everyone. And how beautiful is that?

'Blue's Clues & You' has an LGBTQ+ positive alphabet song.

Social media users were quick to share their appreciation of Blue's ABC song, with some taking to Twitter to share messages like, "I’m so happy Blue’s Clues supports lgbtq+," and "BLUE'S CLUES SAID LGBTQ+ RIGHTS FOR REAL Y'ALL."

Blue's Clues & You is clearly some quality programming. And if your kids want to listen to this new ABC Song on repeat... why not?