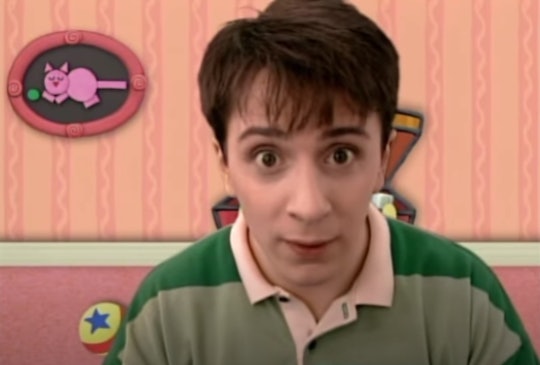 “I guess I just wanted to say that, after all these years, I never forgot you, ever.”

It has been 25 years since Steve and his sweet puppy Blue first came into our lives. And it’s been 19 years since Steve left the show behind to head off to college in 2002, leaving his brother Joe to hold down the fort. While Joe was full of the same kind of enthusiasm and charm as his older brother, it somehow felt like a bit of a void with Steve retiring his green shirt. We missed him. And now, on the 25th anniversary of Blue’s Clues, Steve has come back to say his final goodbye in a video that is getting fans, old and new, really emotional.

On Wednesday, Steve Burns opened up to fans in a sweet video on Nick Jr. almost 20 years after he left the series. He has, however, appeared in several cameos since, including a 2019 guest spot on Blue’s Clues & You (which stars Joshua Dela Cruz) alongside his “brother” Joe, played by Donovan Patton.

“Hi, you got a second? Okay. You remember how, when we were younger, we used to run around, and hang out with Blue, and find clues, and talk to Mr. Salt, and freak out about the mail and do all the fun stuff?” Steve asked while wearing his beloved green shirt. “And then one day, I was like, 'Oh hey, guess what? Big news. I'm leaving! This is my brother Joe. He's your new best friend.' And then I got on a bus and I left and we didn't see each other for, like, a really long time? Can we just talk about that?”

He went on to tell fans that he left the show to go to college which was “challenging,” before adding, that it was “great because I got to use my mind and take a step at a time and now I literally am doing many of the things that I wanted to do.”

Steve Burns talks to fans about his departure from ‘Blue’s Clues.’

Burns went on to pursue a career in music and voiceover acting in the years since he left the show, but he still thinks about his time on Blue’s Clues with affection. “I wanted to tell you that I really couldn't have done all of that without your help,” he said. “And, in fact, all the help that you helped me with when we were younger is still helping me today, right now, and that's super cool. I guess I just wanted to say that, after all these years, I never forgot you, ever. And I'm super glad we're still friends. Thanks for listening. You look great by the way. Whatever it is you're doing, it's working.”

Clearly fans still remember Steve with love as well. His video has been watched over 18 million times on Twitter, with social media users writing messages like, “well I didn’t expect to be crying today but here we are,” and “What an amazing video by Steve! It was like seeing your best pal from childhood after a really long time. It was exactly what we all needed today! Simple advice, but, like always, right on point! We are so happy we’re still friends too!”

We already knew we missed Steve. But knowing he missed us too... it’s like we figured out Blue’s Clues after all.