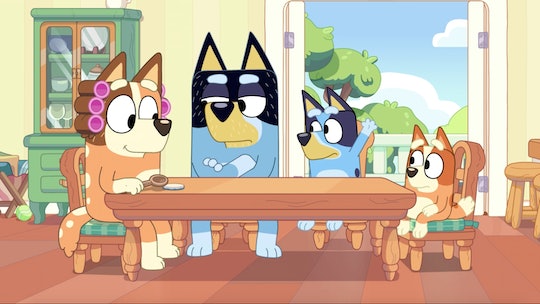 We never knew we’d be so excited about a cartoon dog’s “fluffies”!

When the highly anticipated Season 3 of Australian import Bluey came to Disney+ earlier this year, fans of all ages were thrilled... but it wasn’t long before they noticed something weird. There was something missing — a whole episode, in fact. But now “Family Meeting” better known colloquial as the “Bluey fart episode” is available to stream on Disney+!

Let’s rewind a bit. This past August, the first half of Season 3 became available in the U.S. for the first time. Some eagle-eyed fans who’d already had a chance to check out the season’s 2021 Australian airing noticed some changes made when Bluey entered the House of Mouse. An oblique (but obvious) conversation about Bandit getting a vasectomy was changed to a discussion about tooth removal surgery, a reference to a toy “peeing on the curtains” was removed. But the biggest change was the omission of an entire episode: “Family Meeting.”

At the time Disney+ issued a statement to Disney fan site Pirates And Princesses that the episode hadn’t been cut entirely (and so wasn’t, as has been alleged “banned”) but needed some review. “‘Family Meeting’ will roll out on U.S. platforms soon,” the company wrote in August. “Some of the Bluey content did not meet Disney Junior broadcast S&P [Standards and Practices] in place at the time the series was acquired. Now that it is rolling out on other platforms, it is a great opportunity to reevaluate which is what we plan to do.”

So what was so egregious that it needed extra review? Farting! The whole episode, in fact, is a mock trial (presided over by the Honorable Judge Chili) on the subject of whether Bandit “fluffied” in Bluey’s face. (“Her face is at bum level! It’s hard not to!”) The subject of tooting (usually Bandit’s tooting) has indeed come up in the show before, but not this frequently. Still, even down to the use of the entirely innocuous term “fluffing” (both “fluffied” or “fluffed”, we learn, is acceptable for use in the past tense) and the use of play as a way to learn are par for the course for the children’s series, so it’s truly nothing scandalous.

We have to imagine kids are going to be delighted by this silly episode. And social media has already shown us adults are, too.

“Just watched the ‘Family Meeting’ episode of Bluey with my kids,” tweets @whatuphohm, “Absolutely loved it! No idea why it ever would have been censored. And ‘fluffied’ is the cutest, most innocent term for fart ever.”

“They finally released the fart episode of Bluey in the USA and it's 100/100 A+,” chimes in @PresBillMacohe.

But it’s not all fluffies on the Bluey front. Disney+ has also released another episode that wasn’t included in the August drop. “Smoochy Kiss” is all about the fact that, when it comes to relationships, no one is perfect and you have to take the good with the bad... yes, including some pretty gnarly fluffies.

More Like This
Exclusive: 'Firebuds' Dives Into Hanukkah Traditions In Festive New Episode
Surprise Your Kids With This Exclusive Sneak Peek At Mickey Saves Christmas
Brandy Will Play Cinderella Again In The Disney+ Movie The Pocketwatch
Rubble From 'PAW Patrol' Is Getting His Own Spinoff Series Full Of "Messy Demolition"