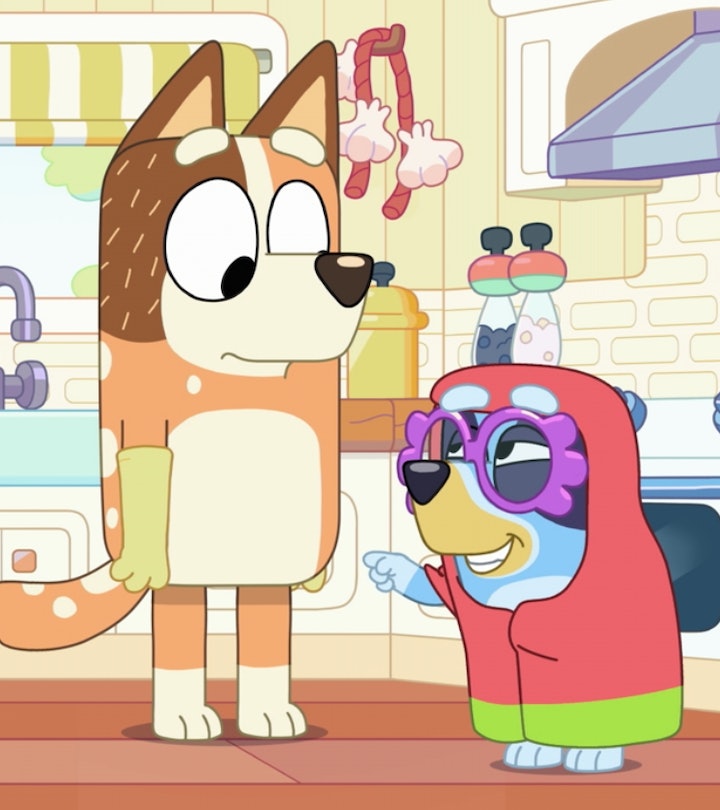 The Best (& Worst) Games Ever Featured On Bluey

From the perspective of the parents who have to play them...

Over the course of three seasons, fans all over the world have fallen in love with the sweet, innocent realness of Bluey, which beautifully captures what it’s like to be and raise children. At the heart of the show is the concept of learning and growing through play, and the Heeler family — Chili (Mum), Bandit (Dad), Bingo, and Bluey — has played a lot of games over dozens of episodes... which, of course, mean our non-cartoon dog, human children want to play these same games. Sometimes that’s fun! Other times? Well, other times we curse the day Bluey entered our homes. So we’ve rounded up the best and worst games ever featured on Bluey.

Look: we get it. We remember being children, begging our parents for horsey rides, and the absolute joy of mounting our noble parent-steeds and pretending to be cowboys, nights, princesses, or whatever else we could dream up. It was fun!

But you know who didn’t think it was fun?

Our poor parents’ knees. Children and their soft, not-quite-fully-formed bones cannot understand this. They also don’t recognize/care how heavy they are. So we feel Bandit and Stripe in this episode, because my God we’ve all been here...

In “Magic,” Bluey teaches Bingo how to use magical powers to get the adults to do whatever they command, something Bluey learned from Chili... but Bluey, of course, neglected to share the most important rule: no cheeky magic. What ensues, of course, is Bluey going absolutely mad with power at the expense of her poor parents.

Let me tell you: when my kids saw this episode, they were into this game. And it was cute for, like, five minutes? After that my husband and I were done, but that didn’t stop them from attempting to control our every move and then complaining when we didn’t “play the game right.”

In this game, after Bandit accidentally eats Bingo’s last French fry, she is given three “dance mode” opportunities as payback, which means she can spontaneously make her parents dance no matter where they are... or how embarrassing it will be for them to randomly burst into dance.

You can see where this is going, right?

This is a game I have absolutely put my foot down on with my kids, who would love nothing more than to routinely humiliate me in public, as if their toddler years didn’t do that enough.

Is this a lovely episode about encouraging your kids to speak up for themselves? Absolutely! Like pretty much all Bluey episodes, this one is great. Is this a game I will play with my kids in public? Absolutely not: I’ve suffered enough.

This might be a Hot Take, but hear me out...

Unicorse is the name of a hand puppet Bandit uses to annoy Chili and make Bluey laugh. He’s obnoxious, hyperactive, loud, and even has a catchphrase (“Aaaaaaand... why should I care?”) To be on the receiving end of Unicorse, as Chili was, is irritating.

To be Unicorse — to forgo all parental protocols, playfully annoy your partner, and troll your kid (as they giggle hysterically) — that’s kind of the best. He’s not an everyday character, but Unicorse is for sure a fun game to have in your imagination’s arsenal.

In this episode, as Chili cleans lorakeet poo off the porch (don’t worry: she’s not afraid of a bit of hard work), Bluey and Bingo play “Queens,” a game in which one of the girls gets to be the queen while the other plays the role of her butler. Of course, as the game wears on, they find they both want to be the butler... that is until they discover they can both have what they want by crowning Chili the queen. This gives Mum the opportunity to sit back with a cool drink in a comfy chair flanked by servants whose only desire is to obey her every whim.

It’s a nice gig if you can get it (so long as you are playing to role of Queen).

As a parent, there are few episodes I’ve related to more than “Whale Watching,” when the normally perky Chili and Bandit are forced to parent while (obviously if not explicitly stated) extremely hungover after a New Year’s Eve party. Whomst among us hasn’t been there? Even if you’ve never had the absolute pleasure of having to be a parent after a night of overindulgence, I doubt there’s a parent on the planet who hasn’t had to muscle through illness, exhaustion, or injury because — and I cannot stress this enough — children are by nature self-centered and don’t care if you’re not feeling up to parenting on any given day.

Fortunately for the Heelers, Bluey and Bingo have decided to play whale watching, which consists of Bandit lying on the floor while they sit on his back, occasionally having to rock back and forth to simulate stormy waters, and Chili lying on the couch making whale noises eating corn chips.

OK, eventually they decide to get more involved in the game, with Chili dramatically breeching in the air and landing on the “boat,” but overall any game where I can mostly just lie down while my kids make their own fun is a great game.

You didn’t think we were going to skip this absolute banger, did you? I don’t care who you are: “Grannies” is hysterical. Of course, it can be less funny IRL, when you’re not in the mood to be subjected to Rita and Janet’s antics (especially since the grannies will ignore everything you tell them and claim hearing loss). Sure, Grannies is fun on a rainy Saturday when you’ve got nothing else to do, but it’s less charming when the “grannies” have to get to school on time and you’re already running late for work. But even so: it’s a fan favorite for a reason.

More Like This
Freeze! The Single From The New 'Bluey' Album Just Dropped
Exclusive: Watch How A Group Of Princesses Save The Day In Netflix's New Animated Series
10 Great Podcasts That Will Keep Your Kids Entertained On Your Next Family Road Trip
Marcel The Shell Is Heading To The Oscars!
What Parents Are Talking About — Delivered Straight To Your Inbox