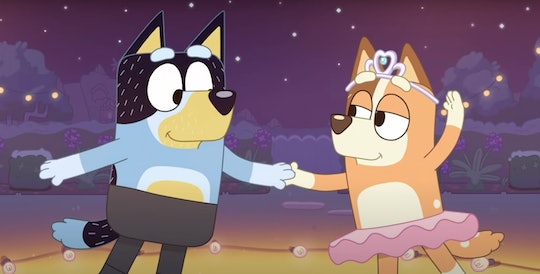 We Were Hoping For A Bluey Halloween Episode, But Here’s Why It Probably Won’t Happen

The reason why is a bit complicated...

Just because something is technically for kids doesn’t mean adults can’t join in the fun. Take, for instance the Australian hit series Bluey, which airs on the Disney Channel, Disney Junior, and Disney+ in the U.S. Another example? Halloween! Largely seen as a kids’ holiday, some adults count down the days to every Oct. 31. So this led some adult viewers to wonder: Can we expect to see Chilli and Bandit take Bluey and Bingo trick-or-treating any time soon? The subject of a Bluey Halloween episode recently came up on Reddit.

“Will there ever be a Bluey Halloween Episode?”

The question was posed by u/plushiekid on Reddit’s Bluey forum. “They’ve done a Christmas episode for seasons one and two,” they reasoned. “So I wanna know if there will be a Bluey Halloween episode.”

It’s a reasonable question; Halloween-themed episodes of kids’ shows have been common fare for the past few decades. Given the international popularity of Bluey, one could, perhaps, reasonably expect the show might follow suit.

The answer? Probably not

The most comprehensive answer on the forum, from fellow fan u/AQuaverPastEight, could be summed up in their initial response: “I would say not impossible but not generally expected. Halloween has only been catching on in Australia in the last few years, under the influence of American TV and is probably somewhat controversial (either people are for it or adamantly against it).”

They went on to outline that, growing up in Australia, Halloween celebrations, dressing up, and parties were not the norm. (Owing, in part, perhaps, to the fact that Oct. 31 is smack-dab in the middle of Australian spring... not too many pumpkins or leaf piles to be had.) Still, the holiday seems to remain controversial in some circles. “There are some people who are adamantly against Halloween and the idea of being introduced,” they continued. “There are others who think it's a bit of fun, like dressing up and doing it ... But I would say those taking part in Halloween are still the minority.”

“Some people do Halloween in Australia, but not many,” agreed u/wotmate. “Quite a few are dead set against it becoming a thing, purely because it's the height of American consumerism.”

Even so, the Heeler Family still manages to get in the holiday spirit

While viewers might not see Bluey and Bingo going door to door for lollies any time soon, the show is not complete adverse to holiday specials. The show has done two Christmas episodes ("Verandah Santa" and "Christmas Swim"), an Easter episode ("Easter"), and a Father's Day episode ("Perfect"). The Bluey channel on YouTube has even given a cheeky nod to Halloween with a compilation of scream-worthy moments and the show’s best costumes in “Happy Heelerween!”

Halloween has been gaining popularity in Australia

In a recent article for The Age, about Halloween festivities in Melbourne since the pandemic moving forward, Clay Lucas notes, “A generation ago, Halloween was unlikely to have come up in discussion of child wellbeing. Considered anathema to most Australians, the majority saw it as a form of cultural imperialism best left to the United States to celebrate.” And yet, he continues, the rise in the holiday’s popularity, he notes, is undeniable.

Dr. Paul Harrison of Deakin University Business School notes that while the “knee-jerk” reaction of older Australians in particular may be to reject the holiday entirely, the country has a long tradition of incorporating practices from other cultures. “We have a strong history of adopting all sorts of rituals from other countries and cultures, so why should Halloween be any different to any other element of culture that we borrow from others?” he asks.

So who knows? In a few years, maybe Halloween will catch on enough to make it onto Bluey. Until then, viewers will simply have to be content with the whimsical charms of non-Halloween episodes. But, if you’re really craving some sort of Halloween magic from your favorite family of heelers, this cute mashup of the character’s best dress-up moments might scratch the itch. Halloween it’s not, but costumes are a good start.