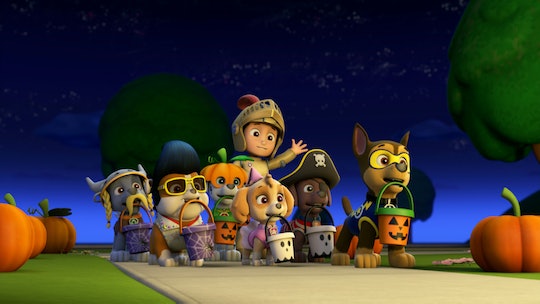 Get dressed up with Chase, Skye, Rubble, and the rest of the PAW Patrol gang for Halloween!

It's Halloween time in Adventure Bay! This year, be sure to add PAW Patrol to your kid’s Halloween watchlist to catch spooky and festive episodes on Paramount+.

Available on Paramount+, one fun spooky episode to catch is Season 5, Episode 16, titled “Pups Save the Trick-or-Treaters.” In the episode, the pups must confront a mysterious kid in a giant spider costume who is taking all the treats from the trick-or-treaters. The episode is part of Paramount+’s month-long Halloween event, Peak Screaming, which also includes other spooky kid-friendly specials from Rugrats, Blue’s Clues, Bubba Guppies, Dora The Explorer, and SpongeBob Squarepants. And when the kids go to bed, adults can enjoy thrillers such as Quiet Place, Child’s Play, Friday The 13th, and the premiere of Paranormal Activity: Next of Kin on Oct. 29.

But if PAW Patrol controls your TV, be sure to also check out these Halloween-themed episodes:

When you’ve had all the PAW Patrol Halloween fun you can handle, check out PAW Patrol: The Movie which premiered on Paramount+ on Aug. 20. Marsai Martin, who plays Liberty, tells Romper it’s a movie that shows kids of a few special people in our community. “I know they’re all puppies,” Martin said, “but they show how important first responders are to kids and showing how we all want to stay safe for our world and our environment.”

And if you’re looking to dress up the kids, the PAW Patrol costume is one of the most popular costumes this Halloween, specifically Skye. As the pups say, “PAW Patrol is on a roll!”

More Like This
Rubble From 'PAW Patrol' Is Getting His Own Spinoff Series Full Of "Messy Demolition"
20 Heartwarming Episodes To Help Prepare Your Child For A New Sibling
'Sesame Street' Puts Fun Spin On 'The Nutcracker' In New Holiday Special
Exclusive: 'Firebuds' Dives Into Hanukkah Traditions In Festive New Episode