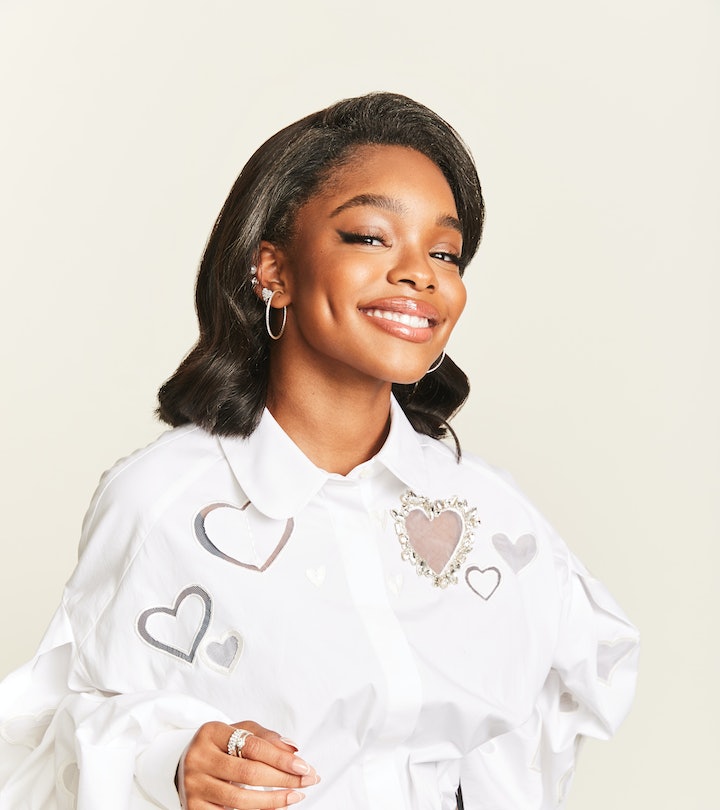 Marsai Martin On Being A Role Model For Young Black Girls

Whether she’s breaking a Guinness World Record or voicing a spunky pup in PAW Patrol: The Movie, Marsai Martin is showing young Black girls “they can do anything.”

As Hollywood’s youngest executive producer at just 17 years old, Marsai Martin seizes every opportunity to present positive representation, specifically for young Black roles. From ABC’s black-ish to her latest role in PAW Patrol: The Movie, the teen mogul hopes to show Black girls they can do it all.

“Representation is so important,” Martin tells Romper during a recent Zoom interview. “There wasn't a lot of young Black girls on television [when I was growing up], and if there was one they would cut her out in the first act or have her doing something that is kind of stereotypical.”

“Being in the forefront of creating my own content now and being for the culture and wanting to do things out of the ordinary ... is the best thing for me,” she says.

Martin earned her first official producing credit with 2019’s Little alongside Issa Rae, making her a Guinness World Record holder as Hollywood’s youngest executive producer. (She was just 14 years old when Little was released!) That same year, she went on to launch her own production company, Genius Productions.

For her latest role in PAW Patrol: The Movie, which premieres in theaters and on Paramount+ on Aug. 20, Martin lends her voice to Liberty, the spunky golden dachshund whose signature go-to vehicle is a blue and coral scooter. “She is always into any type of adventure,” Martin says of the new animated pup. And even as Liberty, the teen actress has found a way to express the representation she strives to present as a creative.

“I know they’re all puppies,” Martin says, “but they show how important first responders are to kids and showing how we all want to stay safe for our world and our environment.”

Martin became a fan of the PAW Patrol franchise like a lot of us: while watching the show with a toddler, her younger sister. And even though the animated movie, which also stars Kim Kardashian, Tyler Perry, Jimmy Kimmel, and grown-ish’s Yara Shahidi, follows a bunch of fictional puppies responding to emergencies, Martin says she can relate Liberty as they have the “same energetic vibe.”

“[Liberty] really shows that she’s a fan of the PAW Patrol. I think when I'm a big fan of somebody, you really see that I'm a big fan,” Martin says.

Whether it’s through Liberty, her philanthropy, or other projects, Martin is an incredible role model. And it’s a title she’s honored by and takes seriously. “It makes me keep going,” she says. “It makes me realize why I was in this industry in the first place was to show young Black girls that they can do anything at any age and any time.”

Indeed, Martin says one of the most rewarding parts of her job is knowing she’s creating a difference. Children and mothers, she says, have come up to her to tell her how important her presence on television is to them. “Showing their daughters or even sons that that that they can do whatever they want and not feel afraid is definitely very reassuring,” she says.

Martin is unstoppable, that’s for sure. And, who knows, she may very well star in more of our kid’s favorite animated movies in the future. But let’s just hope her next role isn’t a cat. “I'm definitely a dog person... I'm scared of cats,” she jokingly shares. “Like I'm not allergic to them, but I'm scared of them! Their attitudes!”