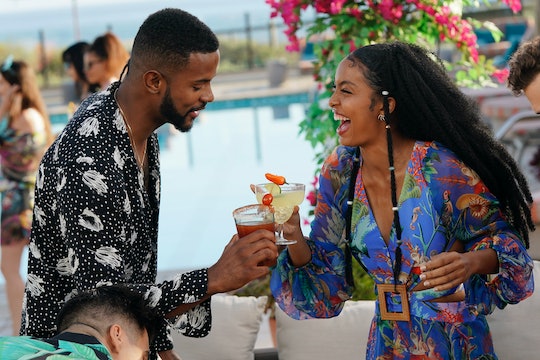 Watch out world, the upcoming, new season of grown-ish is looking to be more “grown-ish” than ever before! Can we expect wedding bells? Looks like it. A 30-second teaser clip of the new season premiered on Freeform last week, just a few months after the Season 3 finale aired in March, and revealed wedding and pandemic storylines are in the mix.

Mark your calendars: Season 4 of grown-ish premieres Thursday, July 8 at 8 p.m. EST/PST on Freeform. After the premiere, new episodes will air on Thursdays.

You Can Stream New Episodes

If you don’t have access to Freeform, new episodes will be available the day after they air on Hulu. Subscriptions for Hulu start as low as $5.99 a month.

Where Season 3 Left Off

If you’re not caught up on Season 3, be warned there are spoilers ahead. Season 3 ended with Zoey Johnson, played by Yara Shahidi, deciding to return to college to finish her degree, after quitting her celebrity stylist job for clients like Joey Badass and his protégé, Indigo, played by rapper, Saweetie. When she gets back, she and Aaron decide to rekindle their on and off-again relationship. Meanwhile, other relationships are in a bit of a shambles, such as Jazz and Doug’s, who asked her boyfriend for space while she trains for track and field. Will the distance prevail? Will this be the final makeup between Zoey and Aaron so they can finally move forward?

Meanwhile, Javier was unfaithful to Ana. And Nomi returns to Cal U with a brand new baby. We’ll just have to wait and see what Season 4 has in store!

What Can We Expect In Season 4?

The short teaser released features a mariachi band playing the show’s theme song “Grown” by Chloe x Halle, a beach filled with empty margarita glasses, ripped-up piñatas, bikinis. All of that suggests Zoey and her friends pack their bags for their first group vacation in Mexico before starting their senior year at Cal U. The clip also shows a veil and a wedding cake in the sand. Who could be getting hitched?

In Episode 1 of Season 4 titled “Ugh those feels again,” Freeform’s synopsis notes that Zoey and the gang head to Mexico for a summer getaway filled with drinking games, new hook-ups, some relationship drama, and even a wedding.” Hence, the trailer featuring margarita glasses and a wedding cake. And in Episode 2, the group will still be in Mexico and debating relationship statuses. According to Freeform, the pandemic will also be discussed in the new season.

But our big question is: who put a ring on it? Clutching our pearls until the season premiere. In the meantime, catch up on old episodes of grown-ish before the new season premieres on Hulu.