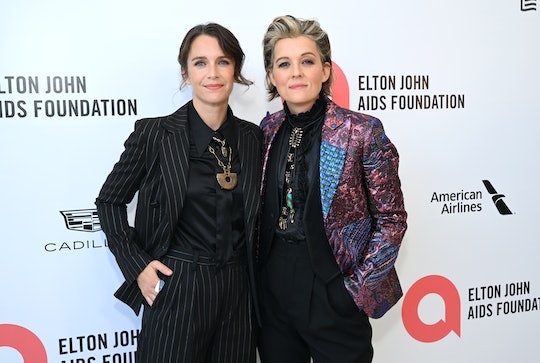 Singer-songwriter Brandi Carlile has been nominated for five Grammy awards in 2022, including Record of the Year. It could be a very big night for Carlile, and fortunately for her she will have her wife Catherine Shepherd by her side. Whether or not the couple have their children by their side at the Grammys is another question. They’re pretty little, after all. So here’s everything you need to know about the star’s happy family.

Carlile met Shepherd in 2009 when her future wife was working with Paul McCartney and managing his charitable works. Shepherd wanted to donate some of McCartney’s memorabilia to Fight For Fear, a charity Carlile works with that aims at teaching women self defense as a means of empowerment.

“We met through our activism and interest in charity,” Carlile told Rolling Stone in 2019. “We communicated for about a year, and the entire time I thought I was talking to somebody who was 65. It was an interesting way to fall in love.”

Carlile and Shepherd, who is British, went on to officially meet in person at one of McCartney’s concerts in New York City, and the love match turned out to be the real thing. They were married in October 2012 at a ceremony in Wareham, Massachusetts, and Carlile celebrated their anniversary in 2021 with a beautiful message to her wife on Instagram.

“You make everything feel like a holiday though and I wouldn’t trade a minute of whatever kind of time you’ll give me,” she wrote in part. “I love you more than boats, and wine…and maybe even more than Elton John…Thanks for marrying me and becoming a reluctant and brilliantly sarcastic American.”

Carlile and Shepherd welcomed daughter Evangeline via IVF in 2015.

Shepherd and Carlile welcomed their first daughter, 6-year-old Evangeline, in 2015 via IVF. Shepherd carried Evangeline, and Carlile opened up in a 2021 essay for Parents about how difficult it was to navigate without seeing any representation of her parenting role. “It was complicated because I didn't know who I was supposed to be in this equation,” she shared. “I knew I wasn't 'Dad,' but I wasn't pregnant either. Catherine was uncomfortable with all the things that were happening to her body, and the whole concept felt so foreign to us.”

Evangeline was “born to two moms on Father’s Day.”

Evangeline was born on Father’s Day.

In her memoir Broken Horses, Carlile wrote "Evangeline was born to two mothers on Father's Day.” She added, “but she made it clear right away that she only needed us. The rigidity around gender roles in parenting is indeed a construct. We know that now! But it took time,"

Carlile found an instructor to help her change her parenting narrative.

Brandi Carlile and wife Catherine Shepherd are all about their family.

After growing weary with the constant barrage of heteronormative parenting roles portrayed in the media, Carlile and Shepherd took it upon themselves to connect with an instructor who would help guide them as parents of Evangeline in the LGBTQ+ community. “We found a really amazing LGBTQ+-sensitive instructor who came to our home and helped us navigate and identify our natural parental inclinations together, and that was hugely important,” she told Parents. “I strongly recommend this for LGBTQ+ parents embarking on this journey. There are so many mechanisms in place that make us feel inadequate — more than people really understand.”

They felt like pros when they welcomed their second daughter in 2018.

Catherine Shepherd and Brandi Carlile welcomed their second daughter in 2018.

By the time Carlile and Shepherd welcomed daughter Elijah, now 4, in March 2018, they had a clearer sense of who they were as parents. Carlile explained in her Parents essay that they opted for artificial insemination rather than IVF the second time around, and they were both more comfortable as parents. "Our kids know us .... like, really know us. We are learning about ourselves through them. They're the teachers. I'm Mama and Catherine is Mummy," she wrote. "The girls decided that on their own, probably based on what we call our own mothers."

Brandi Carlile and Catherine Shepherd are now parenting role models themselves. Honest, curious, and ready to share their own experience with anyone who might need it.