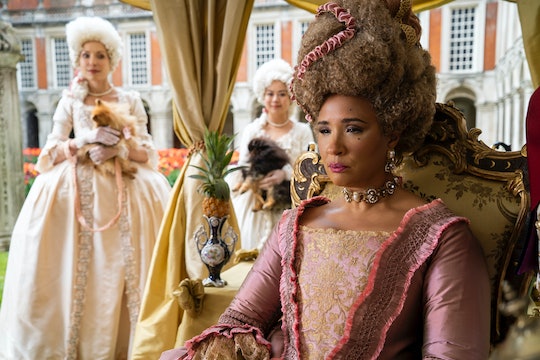 Like Stinky Cheese & Fine Wine, Bridgerton Is A Treat For *After* The Kids Go To Bed

A somewhat less sexy Season 2, however, may be more comfortable to watch with older teens.

There are certain treats that are meant for people of a certain age. Strong, good cheese. Dark chocolate. Fine wine. And Bridgerton on Netflix. Shonda Rhimes’ period drama about the beautiful Bridgerton family and their various love affairs is exactly the kind of confection best enjoyed by adults and perhaps older teens. Although, in my experience, perhaps not together. Things can get a little awkward.

Bridgerton is a period drama full of romance.

Directed by Rhimes, the first season of Bridgerton saw a reimagined version of Regency-era England under Queen Charlotte. Based on the series of romance novels by Julia Quinn, the entire story revolves around the fantastically charming Bridgerton children: Anthony, Benedict, Colin, Daphne, Eloise, Francesca, Gregory, and Hyacinth. Their romantic entanglements are followed closely by anonymous gossip columnist Lady Whistledown, voiced by Julie Andrews, and even Queen Charlotte herself.

Daphne Bridgerton meets the Simon Basset, the Duke of Hastings, and the two become embroiled in a will they/won’t they storyline with lots of sexual tension. And then, just sex.

So, is Bridgerton appropriate for teens to watch?

When the first season of Bridgerton debuted in 2020, it was a real breath of fresh air in comparison with other period dramas. First of all, there was actual diversity in the cast. But it was also fun and frothy, with a lighter touch and even some more modern music, which could give the impression that the series could be appropriate for teens. As for the first season? Not so much. There was a lot of sex. The Duke of Hastings and Daphne Bridgerton were... well, very attracted to each other, let’s say.

Common Sense Media recommends the audience as 16 and older for “sex, nudity, smoking,” while further noting that “sexual politics is also a complicating factor in the drama.” Older teens can most likely handle it, especially since Season 2 is expected to be somewhat less sexy.

Season 2 is expected to have fewer sex scenes.

The second season of Bridgerton premieres on March 25 on Netflix, and this time will focus on Daphne’s brother Anthony (in keeping with the novels where each Bridgerton child gets their own storyline). This time around, it looks like there will be decidedly less sex. Anthony and his love interest Kate, older sister to the woman chosen to be his intended fiancée Edwina, are all about sidelong glances and witty repartee rather than full on sex, according to TODAY. So perhaps it will be more comfortable to watch with teens, which is good news since there is a lot to be loved about this series.

The popular Netflix series is rated TV-MA for sex and nudity, which should give you all the answers you need. With all this said, I recommend pouring yourself a glass of wine, eat a piece of good strong cheese, and watch Bridgerton as it’s meant to be watched. Under the blankets on the couch... after the kids go to bed.

More Like This
Everything We Know About 'Virgin River' Season 4 Right Now
14 More Amazing Shows Like Workin' Moms To Watch That Also Get Real About Motherhood
Our Fav Funny Couple Melissa McCarthy & Ben Falcone Created A Weird, New Comedy Series
20 Amazing Shows With LGBTQ+ Characters To Watch With Your Kids