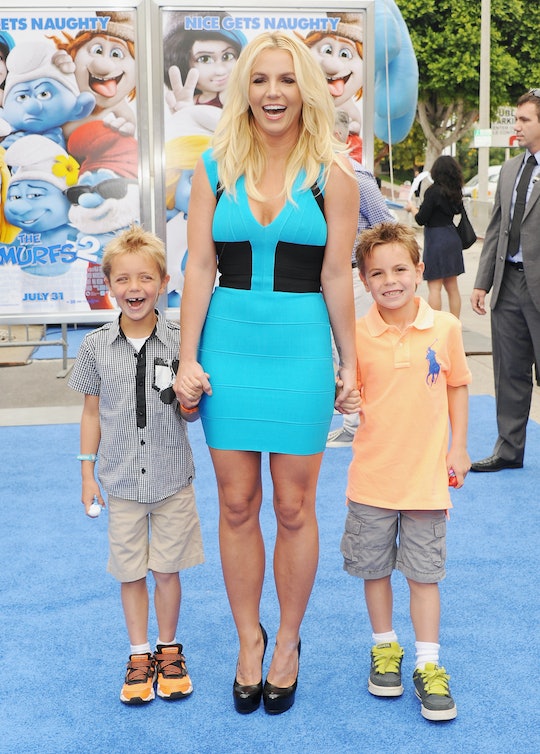 The mom of two tends to be pretty private about her boys, but decided to share a sweet family moment on Instagram.

Even when you are one of the most recognizable pop stars in the world, seeing your kids get bigger can make any mom a little emotional. For Britney Spears, her sons Sean Preston and Jayden, are all grown up these days and are still very clearly the apples of their mom's eye.

On March 2, Spears shared some rare photos of herself with her two teenage sons on Instagram. In the photos, the little family posed in a field as the sun was setting, arms around each other and both boys wearing face masks. The "Toxic" singer wrote a lengthy, emotional post to go along with the two photos, writing in part, "My boys are so big now!!!!" Sean Preston is now 15 years old and Jayden is 14.

"I know … I know … it’s very hard for any mama especially a mama with boys seeing them grow up so fast!!!! Talk about enough to make you go to your knees ... GEEZ!!!!" Spears continued on Instagram. "I’m extremely lucky because my two babies are such gentleman and so kind that I must have done something right."

Spears went on to explain that she rarely posts photos of her sons to respect their right to "express their own identities," but it seems Sean Preston and Jayden approved this photo so she was able to go ahead and share.

Her Sons Are All Grown Up Now

Britney Spears shared a photo of her sons on Instagram.

Spears went on to write that she edited the photo herself and was happy because "I don’t feel left out anymore," a common enough issue for moms with teens, of course. But in Spears' case, it could feel like a bit more of an issue. The pop star shares custody of Sean Preston and Jayden with her husband Kevin Federline, seeing them for unsupervised visits 30% of the time, according to E! News.

When Spears first became a mother back in 2005 after welcoming her oldest son Sean Preston, she struggled significantly with a constant deluge of negative press coverage. Spears gave birth to her youngest son Jayden in 2006, making her a mom of two in just two years. The recent documentary Framing Britney Spears shed some much-needed light on her struggle at the time.

After Spears and Federline separated in 2008, he took over custody of their sons. Today they share custody and Spears seems to delight in her time with her boys.

Her Kids Are Her Inspiration

Britney Spears is "inspired" by her sons.

In 2017, Spears shared a photo of her son Jayden with the message, "I took these photos of my children before my trip this summer… looking back at the photos I've taken of them, it brings me to my knees everyday to see how blessed I am to have such amazing and inspiring kids!!!!! Let’s stay inspired y'all!!!!!"

Spears, like all moms, loves to brag about her kids. Especially when her son Sean plays piano. In 2018, she shared a video of her oldest playing piano and called him a "lil Mozart." In May, she shared video of her son doing gymnastics, as well, proving they're multitalented.

Over the years, Spears, a former Mouseketeer, and her boys appear to have really bonded over a shared love of all things Disney, frequently sharing posts from their visits to Disney parks like this post from 2019 featuring the little family enjoying a day at Disneyland. Her sons like it so much they even let her share their picture.

In 2016, Spears wrote an open letter to her boys for TIME on Mother's Day titled, "You Are My Masterpieces."

"From the day I saw the most precious eyes, I believed in miracles to the core," she wrote. "Such a gift God has given me, exploring in your beautiful worlds every day. I pray as a mother I teach you strength and passion to carry through the struggles in the world. Most battles will always be won on your knees. I pray you find your dreams."

As they grow bigger and bigger, Spears is clearly keeping them close. And happy to be a witness to their lives.

More Like This
Dr. Jill Biden Just Delivered Some Frank, But Powerful, Advice On Motherhood
Anne Heche Remembered As "Loving Mother" To Her Two Sons After Her Death At 53
Gwyneth Paltrow Documented Her Fun & Luxurious Mother-Daughter Trip To NYC With Apple
Serena Williams Is Retiring From Tennis To “Focus On Being A Mom”