You've Got The Look 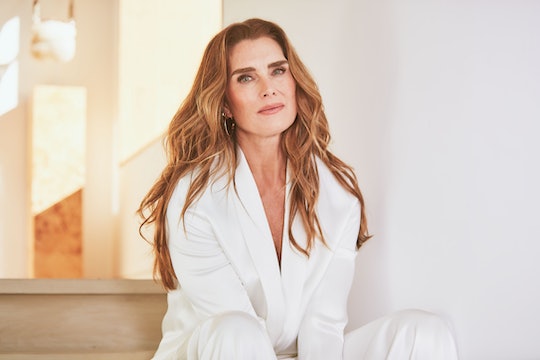 The actor, model, activist, and mother of two is on a mission.

What’s that saying about fine wine? Brooke Shields, 56, has long been outspoken about ageism in Hollywood. The actor, model, activist, and mother of two teenage daughters recently launched Beginning is Now, a wellness company embracing women of all ages. Now, her latest collaboration with Clos du Bois wines is aligned with her mission to embrace aging in a healthy and celebratory way.

The campaign, with a video spot directed by Courteney Cox, is smart and different. “They say chardonnay is for old people,” starts the voice-over. But, instead of trying to reframe the wine as a “young” person’s beverage, the brand is embracing its older demographic, and saluting it for what it is: full of vitality, adventure, and beauty. “We say, cheers to that.”

Romper recently Zoomed with Shields to chat about the campaign, raising teenage daughters in a social media world, and fighting ageism on all fronts.

April Daniels Hussar: Many of our readers are younger moms, or they have younger kids. What is something that you’d like to tell them?

Brooke Shields: Well, that it's hard! That the days go by slowly, but the years go by really fast. It's easier to say that when you're not in it, but you do blink and your kids are older. It's important to try to find balance as much as you can, because what happens is you throw yourself in completely — and that's what motherhood, I believe is — but we forget to take care of ourselves. And then we sort of find ourselves going, “Now what? Oh God.” So start thinking about how you want these years to look like, what you want to do, what you've always wanted to do, but never had the time.

I would say, “Yes, you're in the thick of it, but it's not forever. So one, enjoy it as much as you can. And two, think about yourself. Don't forget to factor yourself in.” We just did a Victoria's Secret motherhood campaign with my younger daughter, and they asked us each to say something to the other — something that you have seen and learned, and hope for them.

And this big thing that my daughter said is, “You spend so much time and energy on other people, your family, obviously — just don't always forget yourself.” And I thought, “She's a 16-year-old, and she's telling me to not lose sight of myself!”

Probably because she only thinks of herself.

BS: And the world revolves completely around her.

BS: And she's sharing her wisdom with me. Out of the mouths of babes! You sort of say, “Yeah, I didn't know that [when I was a new mom].” I would think it was selfish if I spent any time on myself, and that's not the healthiest way to go about it.

When I see these young, young, young girls changing the whole shape and movement of their face, it's heartbreaking.

ADH: Speaking of our teenage daughters, do you think that they, in their generation, are getting any different messages about aging than we did back in the ‘80s and ‘90s?

BS: Oh, it's shocking. It's shocking. Listen, I'm all for advancements and dermatology, and I've seen cosmetic practices change people's whole lives, but it's all been older people. But I really think that the messaging now is this sort of homogenized view and this really unrealistic approach. And you just sit there going, “God, just nurture everything else as well," because they're getting it constantly.

When I see these young, young, young girls changing the whole shape and movement of their face, it's heartbreaking. These are the years you're supposed to be — and just be growing up and experiencing all of it. And this added pressure of this sort of physical prototype is... As a mom of two girls, I see it, we talk about it. They are starting to really have comments like, “Mom, isn't she too young?”

It's about talking to them constantly.

Which they love, to sit down and talk to their mother.

ADH: I love the Jordache campaign that you did recently. What do you think is the biggest holdup to seeing more women over 40, 50, and more in mainstream culture, whether it's on TV or in advertising?

BS: I do think that it's starting to change, but we have to keep putting the message out there. We have to sort of fight to be better to ourselves instead of just giving up and accepting this, and also fight to talk about how beautiful it is that we're all so different. Celebrate that! Internally as women, we need to do this, too. We can't just give up, and we can't just keep comparing ourselves to other people. I think the more those messages are being put out there — and that's a positive side of social media — the more that industries will see that it is a very marketable bracket and they have the money to spend.

BS: They have been working. They're independently spending money. Women over this age, they control the purse strings in the house. They're the ones that buy the cars. They have money to spend. And I'm not saying things need to be expensive, but they're wanting to spend on themselves.

Stop talking about age that way. It's not about ‘ageless,’ it's about vitality.

So I think we have to keep putting the message out there, but we have to do the work. We can't just sit and wait and complain. “We're not marketed to.” We have to make it known that we deserve to be marketed to.

ADH: What is your number one goal with the Clos du Bois partnership?

BH: Our number one goal — and this is what they approached me to talk about, and what we believe in Beginning Is Now — is this idea of really changing the way we talk about and look at age, especially over 40, and changing stereotypes. Chardonnay is not just an “old person's wine”; the whole campaign is “long live!” There's vitality in that way of saying it, because there's vitality with age.

With maturity comes so much wisdom and confidence. And really just the goal is about saying, “Hey, we’ve got to stop talking about this this way.” Stop talking about age that way. It's not about “ageless,” it's about vitality. They're actively going at those words and those stereotypes and saying, “It's just not true."

BS: [Ageism] is expected in my industry only because it's happened for hundreds of decades. But I didn't expect to get it in all marketing, in all advertising. I thought, “Oh God, isn't it ironic that I finally have gotten to this phase?” My kids, they are people that are on their own, practically. I've survived so many things, and now I'm just, I'm here! I'm ready. And now I'm being told, “Nah. Just sit this one out.”

Doesn't work for me.

More Like This
Ginger Zee Had A Perfect Response After A Troll Asked Her "Who's Raising Your Kids?"
It's A Beautiful Day In Jenny Slate’s Neighborhood
How To Ask Your Partner For Support When You Need It
How Do I Rediscover My Sexuality When I’m Completely Touched Out?